The latest ‘Super Mario’ game just got a wild new addition — Link, from ‘The Legend of Zelda’

A major update to Nintendo‘s “Super Mario Maker 2” will add a special item that transforms Mario into Link, the hero from “The Legend of Zelda.” When Mario picks up Link’s Master Sword, he’ll also be able to use a bow & arrow, a shield, bombs, and a special dash […] Nintendo showed off more than two-dozen upcoming Switch games during its Nintendo Direct presentation at E3 2019. The E3 presentation focused on the lineup of games arriving in next few months, and a few that are coming in early 2020. The Switch is Nintendo’s fastest-selling console in the last decade, […] Nintendo’s Switch is outrageously popular, and Nintendo’s games on the Switch are selling like gangbusters. Several games have already sold over 20 million copies, including 2018’s “Super Smash Bros. Ultimate” and 2020’s blockbuster “Animal Crossing” game. In a surprise twist, neither a “Super Mario” nor a “Legend of Zelda” game […] 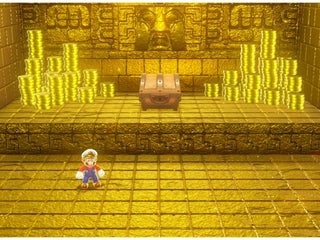