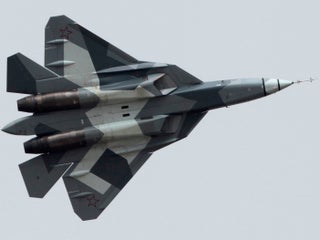 Russia’s new heavy attack drone took flight for the first time alongside the country’s most advanced fighter, the defence ministry revealed Monday. Flying with the fifth-generation Su-57, the Okhotnik, or “Hunter,” drone was able “to broaden the fighter’s radar coverage and to provide target acquisition for employing air-launched weapons,” the […] Russian President Vladimir Putin has decided to order 76 fifth-generation Su-57 stealth fighters, nearly quintupling his original order of only 16 fighters by 2028. Russia has only 10 prototypes, but in their current configuration they lack some of the advanced capabilities and all-aspect stealth typical of fifth-generation fighters. Even with […] Russia’s unstoppable nuclear-powered cruise missile is apparently too expensive to mass produce, CNBC reported Friday, citing US intelligence. Russia has encountered this situation with other much-hyped weapons, such as the T-14 Armata main battle tank and the fifth-generation Su-57 stealth fighter. More importantly, though, the missile still doesn’t work and […]

Russia launched the Su-57 fighter jet to hunt and kill US F-35s and F-22s and to export to other countries at a fraction of the cost of US fighters. But so far, Russia has only built one Su-57 with the correct engine, and it could be 2025 before we see […]

An image of Russia’s new heavy attack stealth drone, the Okhotnik, just leaked. The drone looks like the US’s B-2 stealth bomber with a flying wing design that could give it solid stealth and survivability against the US. Russia has an ambiguous mission for the drone, which it claims will […] Russian media announced on Friday that it had significantly improved the stealth on its Su-57 fighter jet by applying a coating to the glass canopy on the cockpit, as well as similar upgrades to its Tu-160 nuclear bomber. But Russia’s Su-57 isn’t nearly stealth by USor even Chinese standards, and […] ‘We are ready to fight tonight’: The F-35 stealth fighter just pulled off a massive flex that China and Russia aren’t close to matching

Thirty-five F-35s just took off from a single runway and flew in formation in a show of combat power that Russia and China, the US’s rivals, can’t hope to match. Hundreds of F-35s are being produced for countries around the world. Russia’s Su-57 and China’s J-20 have only a couple […]

Russia has been using war-torn Syria as a testbed for its most advanced stealth fighter – the Su-57. The aircraft has flown 10 sorties over Syria, the Russian Ministry of Defence said Monday in a statement accompanying the first official video of the aircraft’s activities in Syria. The Russian fifth-generation […]

Russia’s only aircraft carrier, the Admiral Kuznetsov, sustained massive damage from a 70-ton crane falling on it after an accident at a shipyard, Russian media reports. The Kuznetsov, a Soviet-era ship already known for having serious problems, now has a massive 214 square foot hole in its hull after a […] Russian Deputy Russian Defence Minister Alexei Krivoruchko announced that the country’s air force would receive its much-hyped Su-57 “stealth” fighter jets by the end of 2019. But a review of Russian media reports by The Diplomat indicate that Russia could get just two Su-57s by the end of 2020. Russia […] Russia’s most advanced fighter jet, the Sukhoi Su-57, will reportedly carry the hypersonic R-37M long-range air-to-air missile, a new weapon with the ability to strike targets hundreds of miles away. The Chinese are developing similar systems for their fighter jets. These weapons, assuming US rivals can take them from testing […]

The CEO of the Russian MiG corporation said on Friday that work on an experimental design for a MiG-41 fifth-generation interceptor will begin “in the immediate future.” The CEO also said that the next-generation jet fighter would be delivered to the Russian Air Force in the mid-2020s. The MiG-41, or […] Russia has always been a military powerhouse, and remains a top cyber, electronic warfare, nuclear, and conventional threat, but it’s no longer the top one. US defence documents now list China as the US’s main threat, and with good reason. China has produced truly innovative weapons systems and has the […]

Russia says that it will turn its new Okhotnik drone, which is about to make its maiden flight, into a sixth-generation aircraft. Popular Mechanics also published a supposed picture above of the Okhotnik, which was posted on a Russian aviation forum called paralay.iboards.ru. Still, it’s unclear exactly what the Okhotnik’s […] Russia announced earlier this month that the Su-57, its proposed entry into the world of fifth-generation stealth fighters, would not see mass production. The jet had some promising capabilities in combat, but design and production difficulties made it a challenging project with limited export potential. This move represents a failure […] A Russian lawmaker said this week that Su-57 stealth jets will be two and a half times cheaper than F-22s and F-35s, despite the varying price tags of the US aircraft. The Russian lawmaker’s comments came after Moscow late last month ordered a dozen Su-57s, which are expected to be […]