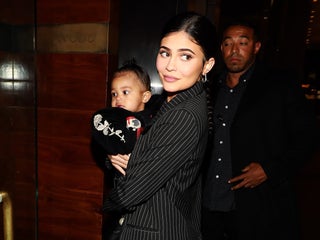 Twitter is losing it over how adorably polite Kylie Jenner’s toddler, Stormi Webster, is in a new mother-daughter baking video 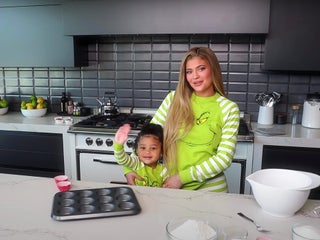 Kylie Jenner said her daughter Stormi is allergic to nuts, a year after the 2-year-old was hospitalized with an allergy

In a new Harper’s Bazaar video detailing everything she eats in a day, Kylie Jenner said her house is nut-free because her daughter Stormi is allergic to all nuts. Nut allergies can lead to a medical emergency, and may be the reason Stormi was hospitalized last summer. Nut, and particularly […] Kylie Jenner recently filmed a video for Harper’s Bazaar about everything she eats in a day. The 22-year-old mogul said she has bone broth, raw celery juice, a vanilla iced latte with oat milk, and peach tea in the morning for breakfast. She detailed her surprisingly low-key workout routine: “I […] Kylie Jenner threw her almost-2-year-old daughter, Stormi, an over-the-top backyard tea party on Sunday. The party was in celebration of the upcoming launch of Kylie Cosmetics’ new Stormi-themed makeup collection on February 1, which is Stormi’s birthday. The event featured a purple ball pit and butterfly-shaped pigs in a blanket. […] Kylie Jenner shared a sneak peek of her new makeup collection inspired by her daughter, Stormi

Kylie Jenner, the makeup mogul behind Kylie Cosmetics, is launching a collection of new eyeshadows, Lip Kits, lip glosses, and a blush inspired by her 1-year-old daughter, Stormi. Jenner gave her followers a sneak peek of the Stormi Collection in a series of Instagram Story posts on Saturday. The collection […] Kylie Jenner reveals she has at least 4 full-sized Christmas trees in her Los Angeles mansion, including one that’s 18 feet tall

Kylie Jenner shared a YouTube video on Monday in which she gives a tour of her home’s multiple Christmas trees. Jenner’s Christmas decoration tour included a massive tree that she said is about 18 feet tall. The Kylie Cosmetics mogul decorated her home’s grand tree with matte white ornaments to […] Kris Jenner gifted her 1-year-old granddaughter Stormi Webster an elaborate playhouse for Christmas featuring furniture Kylie Jenner had when she was little. Kylie Jenner gave fans a tour of Stormi’s new digs in a YouTube video she posted Monday. In the video, the Kylie Cosmetics entrepreneur shared emotional moments with […] Kylie Jenner shared a video of a typical day in her life, but baby Stormi steals the show

Kylie Jenner shared a new 20-minute vlog titled “Kylie Jenner: A Day in the Life” on her YouTube channel. She starts the day by waking up at 8 a.m. for hair and makeup, then wakes up baby Stormi at 9 a.m. Jenner then heads to her massive fitting room, where […] Kylie Jenner and Travis Scott say TV ‘is out’ for daughter Stormi. Here’s why their rule might make sense.

In an interview with Rolling Stone, rapper Travis Scott made a comment alluding to rules on screen time for Stormi, his daughter with Kylie Jenner. “That’s why, with Stormi – no TV. That TV s— is out.” The couple’s rule is in line with the recent media recommendations from American […]

RANKED: The 19 Kardashian moments that captured our attention in 2018, in order of shock value

We picked the wildest Kardashian-Jenner moments this year and ranked them in order of shock value. Kylie Jenner’s birth announcement nearly clinched the top spot, but lost points since TMZ first broke the news about her pregnancy in September. We ranked Tristan Thompson’s cheating scandal as the most shocking. Other […]

Kylie Jenner shared a makeup tutorial to her YouTube channel for her go-to look when she’s on tour with boyfriend Travis Scott. While working on her eye makeup, Jenner briefly stops the tutorial to introduce a surprise guest. “Liner’s on and Stormi’s awake!” Jenner says while holding up her 9-month-old […]

The Kardashian-Jenners go all out for Halloween and they have passed that on to the next generation. Some of the kids opted for animal outfits (like tigers) while others went with iconic movie characters (like Mini-Me and Jack Skellington. Here’s the complete roundup of the adorable costumes that the Kardashian-Jenner […]