With another historic trip to Iceland, US stealth bombers are building ‘muscle memory’ as the Arctic heats up

Iceland is in a valuable location, and the stealth bomber's deployment there reflects the US military's increasing focus on the region. 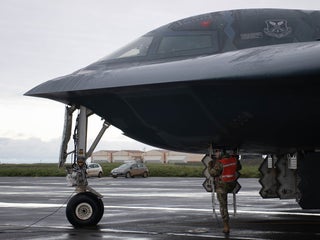 Chinese military experts said on Tuesday that the H-20 nuclear stealth bomber will soon make its maiden flight. China Central Television also released a documentary disclosing that the H-20 is called Hong-20, meaning “bomber aircraft” in Chinese. With a suspected range of about 5,000 miles, the Hong-20 could pose a […] The Air Force retired its first stealth aircraft more than a decade ago, but it’s still lurking in the skies over the US

The US Air Force retired the F-117 Nighthawk, its first stealth aircraft, in 2008. But F-117s have been spotted in flight numerous times in the following years. The Air Force said in 2014 the plane was in “flyable storage,” but in 2017 it began phasing it out for good. On […] China may have released a video teaser of its H-20 stealth bomber and trolled the US’s stealth bombers in the process, according to The Drive. The shot of the possible H-20 looks eerily similar to a Northrop Grumman advertisement of the B-21 Raider, which ran during the 2015 Super Bowl, […]