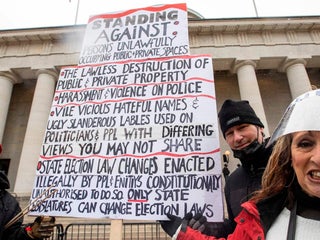 Democrat Erin Zwiener defeated Republican Ken Strange in Texas’ District 45 House of Representatives race on Tuesday night. Zwiener was pregnant throughout her campaign, and according to TIME correspondent Charlotte Atler, she continued to talk with voters even after going into labour. Zwiener went into labour during a border-separations protest […] Democrat Safiya Wazir, 27, defeated Republican Dennis Soucy for a seat in New Hampshire’s House of Representatives in Tuesday’s Midterm elections. The mother-of-two escaped Afghanistan as a child and lived in a Uzbekistan refugee camp for ten years before relocating to Concord, New Hampshire, in 2007. She is the first […] ‘We’ve never seen anything like this’: Democrat wins Kentucky seat by 36 points in district Trump won by 49

In deep-red Kentucky, Democrat Linda Belcher sailed to victory in the state’s 49th House District seat with 68% of the vote on Tuesday. Belcher’s win marked an 86-point swing from the 2016 general election, when President Donald Trump won the district with 72% of the vote. This is the 37th […] Missouri Democrat Mike Revis became the 35th candidate to flip a GOP statehouse seat since President Donald Trump’s election. The win is the latest in a series of Democratic special election victories in unlikely places, including Alabama and Wisconsin. The Democratic swing is a good sign for Missouri Sen. Claire […]