"You are not a lottery ticket." If You Want To Build A Billion Dollar Business, You Might Want To Do It Before You Turn 32

Harvard Business Review decided to figure out some hard data behind ageism in the valley. Why Startups Shouldn’t Take Money From Lots Of Investors

A word of caution. These startups are poised to make some noise. [credit provider=”1D Super Humans Facebook”] On Saturday, Bravo ‘Start-Ups: Silicon Valley’ star Hermione Way wrote a long Facebook post titled “Kiss and don’t tell: Why I decided not to sell my ‘dirty harry’ story to the press.” The post attempts to explain why the reality star and health entrepreneur turned […] Just hours after Taylor Swift and Harry Styles had a January 4 blowout in Virgin Gorda that led to the couple’s break up, the One Direction singer headed to Richard Branson’s private Necker Island where he was quickly comforted by Bravo’s “Start-Ups: Silicon Valley” star, Hermione Way.The 27-year-old reality star […] Bravo Star Hermione Way Straps On $500,000 For Her Startup

[credit provider=”Bravo”] Hermione and Ben Way are a brother-sister team of entrepreneurs, and they’re also reality TV stars on Bravo’s show, “Start-Ups: Silicon Valley.”The pair wanted a $500,000 investment for their company, Ignite. But after Hermione pranced around wearing a strap-on in front of investors, we thought the Ways would never […] [credit provider=”Bravo”] Sibling entrepreneur duo Ben and Hermione Way haven’t had much luck landing a $500,000 investment for their health startup Ignite. If you’ve been following Bravo’s “Start-Ups: Silicon Valley,” you have probably seen the Ways blow their pitch to Dave McClure of 500 Startups and unsuccessfully convince Jeff Clavier of […] This Bravo ‘Start-Ups’ Star Compared Herself To Oprah

[credit provider=”Bravo” url=”http://www.bravotv.com/start-ups-silicon-valley/season-1/photos/photo-diaries/before-they-were-geeks-sarah#image-140284″] Lifecaster Sarah Austin, one of the stars of Bravo’s Silicon Valley reality show, compared herself to one of television’s most successful personalities. “If Oprah was white and she was in tech, she would be me,” Austin said. [credit provider=”Bravo”] You’re always hearing about how people quit their cushy jobs to do a startup and then got rich. Bravo ‘Start-Ups’ Star: Some Of The Cast Members ‘May Be Insane’

Bravo’s “Start-Ups: Silicon Valley” has received its fair share of reviews since premiering two weeks ago. [credit provider=”Bravo”] If you’ve been watching Bravo’s new reality show, “Start-Ups: Silicon Valley,” then you won’t be surprised to learn that Kim Taylor has quit her Account Management job at Ampush Media.Up next for Taylor: founding a company. [credit provider=”Facebook”] Dwight Crow has made quite the impression on Bravo’s “Start-Ups: Silicon Valley,” the reality-TV show that’s drawn boos up and down the heartland of tech.But that doesn’t seem to be hurting him at Facebook, where he’s been working for the past month after putting his startup, Carsabi, for […] Silicon Valley Men Are ‘One Third Gay And One Third Geeks’

Silicon Valley is undoubtedly a great place to start a company, secure investments, and network with like-minded individuals.But for finding a mate? Bravo’s “Start-Ups: Silicon Valley” follows the lives of eight entrepreneurs who are trying to make it.But last night’s premiere episode focused mostly on siblings Ben and Hermione Way, two UK natives who were separated when they were younger after their parents divorced.

If You Want To Blow A Meeting With 500Startups’ Dave McClure, Text Him A Middle Finger Symbol And Sleep Under His Desk 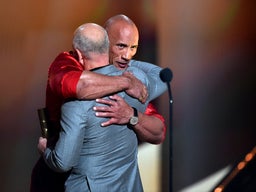