There are only 5 actors who have played multiple characters in the Marvel Cinematic Universe. Here they all are.

On Saturday at the D23 Expo, Disney announced the cast of Marvel Studios’ “The Eternals.” In this announcement, it was confirmed that Gemma Chan will play the character Sersi. Chan recently played an entirely different character in “Captain Marvel,” making her the fifth actor to play more than one character […] Arnold Schwarzenegger will star in his first animated show when he voices the lead character in “Stan Lee’s Superhero Kindergarten.” On Tuesday, Lee’s POW Entertainment and Genius Brands International announced the launch of the series, which marks the last project Lee created before his death last year. Schwarzenegger plays Arnold […] Warning: There are spoilers ahead for “Captain Marvel.” The start of “Captain Marvel” has a sweet tribute to Stan Lee at the very beginning. The former president and chairman of Marvel Comics died in November at the age of 95. Bring the tissues along if you head out to see […]

From Meghan Markle to the World Cup: Here are the top 10 searches on Google in 2018

Google has unveiled its Year in Search for 2018. The annual compilation contains the top worldwide Google searches of the year. This year’s list includes several tragic deaths as well as the World Cup. As 2018 draws to a close, Google is looking back on the top searches of the […] Marvel Studios chief Kevin Feige wrote a tribute to Stan Lee, and described their final meeting: ‘Maybe on some level, he knew’

Marvel Studios president Kevin Feige wrote a tribute to Stan Lee for Entertainment Weekly this week. Feige described his final meeting with Lee, in which the two reminisced about Lee’s cameos in Marvel movies. “He talked about the past more than I had ever heard him talk about the past,” […] ‘Game of Thrones’ author George R.R. Martin wrote heartfelt goodbye to Stan Lee, and shared that his first published work was a letter in a Marvel comic

“Game of Thrones” author George R.R. Martin said goodbye to Marvel Comics legend Stan Lee on Friday in a blog post. Lee died at the age of 95 on Monday. Martin said his first published piece of writing was a letter in an issue of a “Fantastic Four” comic by […] Armie Hammer apologizes for lashing out at people grieving Stan Lee with selfies, promises to work on ‘impulse control’

A day after Marvel co-creator Stan Lee died, Armie Hammer criticised celebrities posting photos with him, saying they were narcissistic. He got trashed for it on Twitter, including by “The Walking Dead” star Jeffrey Dean Morgan, who called him “a real asshat.” Hammer apologised, acknowledging he acted like an “asshat” […]

Michael B. Jordan opened up to INSIDER about interacting with Marvel legend Stan Lee, who died at 95 years old on Monday, several times over the years. Jordan starred in two films that Lee executive produced, 2015’s “Fantastic Four” (where he played Johnny Storm) and 2018’s “Black Panther” (where he […]

“X-Men” star Hugh Jackman shared a memory of “creative genius” Stan Lee, who died Monday at the age of 95, while on CBS’ “The Late Show With Stephen Colbert” Monday night. Jackman said he was on a red carpet at Comic-Con one year and expected some excitement because he was […]

Stan Lee makes cameos in upcoming movies “Ralph Breaks the Internet” and “Spider-Man: Into the Spider-Verse.” And if you missed “Venom,” he’s in that, too. The movie is still in theatres. Stan Lee died on Monday, but we’ll still see a lot of the Marvel legend in theatres before the […] 17 iconic Marvel characters that exist because of Stan Lee

Most of the beloved Marvel characters from the comic books, films, and TV series wouldn’t exist if it hadn’t been for the legendary writer Stan Lee. He created characters like the Hulk, Iron Man, Thor, the X-Men, and Black Panther, alongside comic-book artist Jack Kirby. Many of Lee’s stories were […] 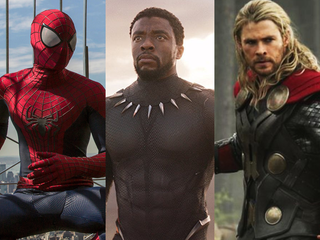 Stan Lee spent a lifetime condemning racism, most prominently through the heroes in his comic books

Stan Lee, the founder of Marvel Comics, died at the age of 95 on Monday. Lee spent a lifetime condemning racism, most prominently via the heroes in his comic books. “I always felt the X-Men, in a subtle way, often touched upon the subject of racism and inequality, and I […]

Stan Lee died Monday at the age of 95. His passing led to an outpouring of grief on Twitter by celebrities who loved his work. As the co-creator of Marvel comics, Lee created many of the franchises that dominate Hollywood today. Stan Lee, who cofounded Marvel with his sidekick Jack […]

Police are investigating claims of elder abuse suffered by Marvel legend Stan Lee, and it’s just the latest turn in a strange saga

Los Angeles police are investigating allegations of elder abuse suffered by Marvel Comics legend Stan Lee. A restraining order has been filed against Lee’s caretaker and business partner, Keya Morgan, who was arrested on Monday on suspicion of filing a false police report. It’s the latest development in a strange […] Leonardo DiCaprio wants to star in a Stan Lee biopic, according to the Marvel icon

Already rumoured to be in consideration... Marvel comic book, “The Fantastic Four,” was adapted into a movie in 1993 with a $US1 million budget, but was never officially released. German producer, Bernd Eichinger, failed to get Hollywood backing, but he risked losing his rights to the comic if he didn’t start production by the end of […] Warning: There are spoilers ahead if you have... Stan Lee let it slip that he will have a very different cameo in ‘X-Men: Apocalypse’ With the passing of Stan Lee on Monday at the age of 95, we don’t just say goodbye to the face of the Marvel brand, but also the man of 1,000 cameos. The former president and chairman of Marvel Comics is known by many Marvel Cinematic Universe fans as the […]