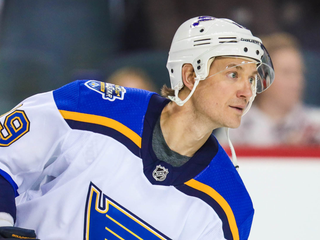 A fan won $100,000 betting on the St. Louis Blues to win the Stanley Cup when they were the worst team in the NHL

The St. Louis Blues won the Stanley Cup for the first time in franchise history on Wednesday night, beating the Boston Bruins, 4-1, in a decisive Game 7. No fan was happier about the victory than Scott Berry, whose $US400 bet on the team cashed for $US100,000. Berry turned down […] The St. Louis Blues defeated the Boston Bruins, 4-1, to win their first Stanley Cup title on Wednesday night. 11-year-old superfan and Blues good luck charm Laila Anderson was there to celebrate with them. Anderson had a rare, life-threatening disease known as Hemophagocytic lymphohistiocytosis, which causes the body’s immune system […] A St. Louis newspaper accidentally ran ads celebrating a Blues’ Stanley Cup championship before the series was over — and now there’s a concern they have jinxed the team

Some fans believe the St. Louis Blues have been cursed. On Sunday, just hours before a critical Game 6 in the Stanley Cup Final, the St. Louis Post-Dispatch accidentally ran ads and messages on its website that prematurely celebrated the team’s victory. The Blues went on to lose the game. […] The Boston Bruins entered Game 6 of the Stanley Cup finals trailing 3-2 in the series and facing elimination. Bruins defenseman Charlie McAvoy made an incredible save with the help of goalie Tuukka Rask to prevent the St. Louis Blues from tying things up in the 2nd period. The Bruins […] The St. Louis Blues completed a massive mid-season turnaround to go from the worst team in the league to one of the final two teams competing for the Stanley Cup. One lucky bettor placed a $US400 wager on the Blues at 250-1 odds when things looked their worst, and now […] The St. Louis Blues called in a season-ticket holder to serve as their emergency backup goalie

The St. Louis Blues were in need of a backup goalie on Thursday night after Carter Hutton was hurt during the team’s morning skate. Tyler Stewart, a Blues season-ticket holder who brings his pads to every game in case his services are needed, got the call on Thursday afternoon after […] Los Angeles Kings take to Twitter to burn the city of St. Louis after second NFL team moves to LA

Los Angeles now has two NFL teams, and on... VIDEO: The St. Louis Rams are being moved back to Los Angeles, California. Prior to the season, in an effort to boost season-ticket sales, the St. Louis Blues announced that fans would only be charged half of the face value for a select group of season tickets, with the other half due only if the team makes the playoffs. WATCH: Two-Punch Knockout In The CHL

It’s not everyday that the CHL makes highlights, but last night Judd Blackwater of the Allen Americans knocked out Jim Jorgenson of the Bossier-Shreveport Mudbugs with two quick punches. When you’re among the league leaders in every statistical category, you can get away with a play or two like this.  Still, Roberto Luongo would like a mulligan on this one. Wayne Gretzky Turns 50 On Wednesday, Here Are 99 Of His Greatest Accomplishments

Wayne Gretzky turns 50 on Wednesday. To celebrate No. 99 hitting the half-century mark we have compiled 99 accomplishments of his time in hockey. 0 – Playoff appearances in four seasons as head coach of the Phoenix Coyotes. 1 – Gretzky scored his first NHL goal in the third period […] [credit provider=”AP” url=”AP”] The Philadelphia Flyers gave new contracts to two of their young stars this week.Claude Giroux signed for three-years, $11.25 million, while Jeff Carter was given an 11-year, $58 million deal on Sunday. It is not unusual for the NHL to push the promotional envelope when it comes to selling their sport to the fans. Enter the St. Louis Blues, who have decided to only charge their season-ticket holders 50% of the cost of each seat, with the fans paying the remaining 50% […]