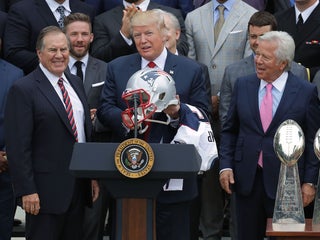 ‘Sounds like Barr wants to be vice president’: DOJ and FBI veterans are floored by AG Barr’s fawning praise of Trump in a stunning interview

Justice Department and FBI veterans were deeply alarmed by Attorney General William Barr’s recent comments about his relationship with President Donald Trump. Barr said in an interview with Cardinal Timothy Dolan, the archbishop of New York, that he saw Trump “on a regular basis, several times a week,” and he […] Fox Sports’ Jay Glazer revealed exclusive footage of the interaction between the New England Patriots’ film crew and Cincinnati Bengals security that’s at the centre of yet another Patriots cheating scandal. The franchise was accused of cheating after sending a video team to the Bengals’ Week 14 game and recording […] The Patriots are once again embroiled in a cheating controversy. Here are other examples of how teams have accused them of bending the rules

The NFL is investigating whether the New England Patriots illegally filmed the Cincinnati Bengals in Week 14. It is not the first time the Patriots have been accused of bending the rules. From “Spygate” to “Deflategate” to malfunctioning headsets and stolen play sheets, here are other examples of how the […] The NFL is reportedly investigating the Patriots after a Bengals official saw them filming in the press box, but New England says the team was just shooting a documentary

Cincinnati Bengals head coach Zac Taylor told reporters on Monday that the NFL was investigating the New England Patriots over an incident that took place in the press box during Sunday’s game against the Cleveland Browns. According to ESPN’s Adam Schefter, the Patriots were filming their advance scout as a […] The FBI warned in a previously unseen document obtained by Yahoo News that conspiracy theories pose a significant new domestic terrorism threat. The bureau went on to lay out several events in which individuals’ belief in hoaxes and conspiracy theories led to or could have led to violence. They included […]

In white-hot attack on the Russia probe, Trump is now calling an FBI informant talking to his campaign ‘SPYGATE’

President Donald Trump sent Wednesday-morning tweets again criticising the Justice Department and intelligence agencies. He is now referring to the reported instance of an FBI informant talking to Trump campaign officials before the 2016 election as “SPYGATE.” President Donald Trump scolded what he called the “Criminal Deep State” on Wednesday […] As he has been wont to do lately, Bill Simmons...