15 photos that show what goes on behind the scenes of Singles’ Day, China’s biggest shopping festival that beats Black Friday and Cyber Monday sales combined

As Singles' Day consumers embark on a shopping frenzy, ecommerce employees and delivery workers go into overdrive to move billions of packages across China. 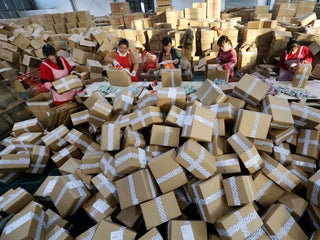 I have always been a Singles’ Day shopper, but this year I’m swearing off the livestream sales events because they’re anxiety-inducing, overwhelming, and annoying

Last year, I ended up buying items like makeup brushes, anime fan goods, and scrapbooking kits that I had not initially planned on purchasing. 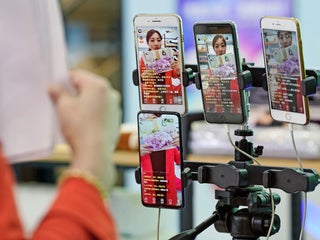 Alibaba’s Singles Day is over. Now comes the task of delivering $74 billion of merchandise ordered on world’s largest shopping holiday.

Alibaba said it passed $US74 billion in sales on Singles Day this year. The major shopping holiday is usually bigger than Black Friday and Cyber Monday combined. The biggest shopping day in the world leads to a massive logistics operation involving millions of people. Visit Business Insider’s homepage for more […] 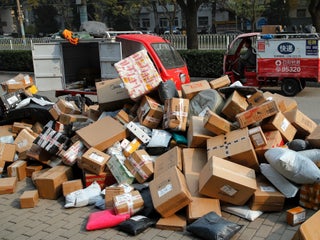 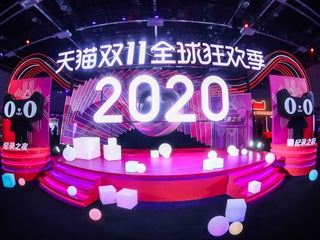 Alibaba executives denied claims made by a user on the Chinese blogging site Weibo that the e-commerce giant inflated sales numbers around Singles Day. Peng Mei – project manager for communications on Singles Day and PR director of Tmall, the retail site owned by Alibaba – responded to the allegations […] As Alibaba reaches the conclusion of Singles Day, its 24-hour shopping extravaganza held each year on November 11, the e-commerce giant has already crushed comparable US shopping events, including Black Friday, Cyber Monday, and Amazon’s Prime Day. Alibaba said that in its first hour, it generated an estimated $US13 billion […] Alibaba’sSingles Day isn’t over yet but it’s already crushing last year’s sales results. As of Monday evening Beijing time, the online shopping giant had pulled in more than $US35.8 billion in sales and counting. Last year, customers spent $US30.8 billion in total over Singles Day. Alibaba’s annual shopping extravaganza is […] Taylor Swift is headlining Amazon’sPrime Day concert on July 10, joined by SZA, Becky G, and Dua Lipa. New for this year, the concert event will stream live on Amazon Prime. It’s designed to draw attention to one of Amazon’s biggest shopping days of the year. With an Ariana Grande […] Singles Awareness Day is officially celebrated on February 15. It’s a day dedicated to recognising singles either by gift giving or small get-togethers. In my opinion, it doesn’t seem like a necessary or a happy holiday. I didn’t know there was such a thing as Singles Awareness Day. I thought […] Alibaba broke e-commerce records yet again on Singles Day 2018, with customers spending $US30.8 billion over the course of the company’s 24-hour shopping bonanza. However, growth slowed compared to years past, revealing the pressure Alibaba is under to continue to post skyrocketing Singles Day sales. Alibaba executives are relying on […] We went to Alibaba’s 24-hour shopping extravaganza that is like nothing in America, featuring a Mariah Carey performance and an online-shopping-themed Cirque du Soleil act. Here’s what it reveals about the future of retail.

Alibaba’sSingles Day is a massive, 24-hour shopping extravaganza unlike anything else in the world. In 2018, the event kicked off with a four-hour gala featuring numerous celebrities, including the model Miranda Kerr and the singer Mariah Carey. The gala is just one way that Alibaba brings drama to online shopping. […] Alibaba made e-commerce history on Sunday, with $US30.8 billion in sales over the last 24 hours as part of the company’s massive Singles’ Day celebration. The $US30.8 billion in generated sales is a significant increase from 2017, when customers spent $US25.3 billion. For comparison, total online sales on Black Friday […]

Alibaba had already generated more sales – $US4.68 billion – just 10 minutes into Singles’ Day 2018 than Amazon is estimated to have reached during its record-setting 2018 Prime Day event. Singles’ Day had topped $US6.5 billion in sales 20 minutes into its 11/11 event, which kicked off at midnight […] Alibaba slides ahead of its Singles Day shopping event

Alibaba will hold its Singles Day shopping event on Sunday. November 11 was originally a Chinese holiday for singles, and Alibaba has turned it into the world’s largest online shopping festival. Alibaba recently reported quarterly results that missed on revenues.The company also slashed its sales guidance in the wake of […] For the love of goods, an ambitious Alibaba plans to double down on Singles’ Day this year

Singles’ Day, China’s once-timid Valentine’s Day repackaged as a 24-hour online retail blitz, is about to get bigger for Alibaba. In just a few days’ time, the world will meet the 10th edition of Alibaba’s “Singles’ Day” shopping extravaganza and the company says it expects to receive more than one […] Alibaba is slipping despite a record-setting Singles Day

Singles Day is celebrated in China as an... Ever since its early days as a student event in...