Sinclair Broadcast Group is to delay airing an interview with conspiracy theorist Judy Mikovits. She claims the scientific establishment manufactured the coronavirus crisis as part of a sinister plot. In the interview, she alleges that Dr Anthony Fauci, the White House coronavirus advisor, created the disease. Critics had claimed that […] 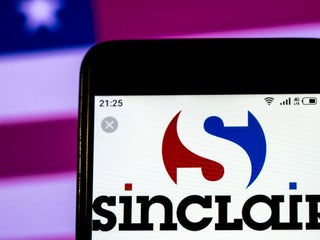 Democratic presidential candidates are spending millions on TV adverts to spread their messages and attack Donald Trump, but they are enriching one of Trump’s most powerful allies in the process. “The amount of fundraising that’s happened through this year has broken all records,” Sinclair Broadcast Group CEO Christopher Ripley said. […] Nancy Pelosi lambasted a reporter for asking if she hated the president, then stormed offstage: ‘Don’t mess with me when it comes to words like that’

House Speaker Nancy Pelosi on Thursday got into an argument with a reporter who asked whether she hated the president. Pelosi was leaving a press conference when James Rosen, from the conservative-leaning Sinclair Broadcast Group, asked the question. “As a Catholic, I resent your using the word ‘hate’ in a […] Sinclair Broadcast Group, a right-leaning broadcasting company, reportedly provided more than 100 of its local TV news stations with a “must run” segment that included a staunch defence of the US’s use of tear gas against migrants at the US-Mexico border on Sunday. President Donald Trump has strongly defended US […] Jim Carrey depicted the Fox News host Sean Hannity and the InfoWars host Alex Jones as WWE wrestlers in a recent drawing. “Performers like Sean Hannity and Alex Jones should join the WWE where their hyperbole will do less damage to the culture,” Carrey said in a tweet with the […] Sinclair Broadcast Group came under scrutiny over the weekend after a clip of news anchors reading a required script about “false news” went viral. Some worried the mandated segment undermined the news organisations, while others – including President Donald Trump – defended Sinclair. Sinclair runs dozens of stations; here is […] Sinclair Broadcast Group on Monday responded to reports that it has been doing President Donald Trump’s bidding by forcing anchors at news stations it owns to read a script on the air criticising bias in the media. In an internal memo obtained by CNN Money, Scott Livingston, a Sinclair senior […] ‘Sinclair is far superior to CNN’: Trump is defending the broadcaster that told stations across the US to read a script criticising the media

President Donald Trump on Monday tweeted a defence of the Sinclair Broadcast Group, which sent out a “must read” script to anchors at hundreds of US stations criticising media bias. Trump said Sinclair was still “superior” to CNN and other cable-news networks, calling them “Fake News Networks.” Sinclair, however, has […] The irony went unnoticed – or at least unstopped – at Sinclair Broadcast Group, which over the last few days has required dozens of new anchors on its roughly 200 local TV stations in the US to read a dark message about “members of the media [who] use their platforms […] Sinclair is buying Tribune Media for $3.9 billion to create a TV behemoth