The US was doomed in Afghanistan and will repeat mistakes if it doesn’t learn from them, top watchdog warns

"Don't believe what you're told by the generals ... or people in the administration saying we're never going to do this again," John Sopko said Thursday. 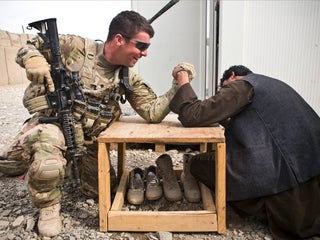 The war on drugs in Afghanistan ‘has just been a total failure,’ the US’s top watchdog there says

October was the 18th anniversary of the start of the US-led war in Afghanistan, and the US is still trying to negotiate its way out of the conflict. The two-decade war has cost the US billions of dollars and thousands of lives, and there appears to be little to show […] As the US moves towards troop withdrawal, the fate of Afghanistan may rest in the hands of these soldiers Trump says it’s ‘insane’ that watchdog reports about Afghanistan are released to the public: ‘The public means the enemy’

President Donald Trump on Wednesday said it was “insane” that reports about the Afghanistan reconstruction effort were released to the public. Doing so allowed the enemy to see the reports, he said. The US has appropriated nearly $US130 billion to that reconstruction effort since 2002. At the White House on […] The latest report card for the war in Afghanistan is out, and the situation does not look good. The Afghan government’s control over territory has dropped to 55.5 per cent, according to quarterly report from the Special Inspector General for Afghan Reconstruction (SIGAR). And casualties among the Afghan security forces […]