Bergeron exited "DWTS" in 2020, a year after openly criticizing the show for casting conservative political figure Sean Spicer as a contestant. 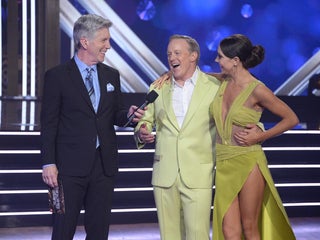 The Biden administration on Wednesday sent letters to 11 Trump-era appointees to military academy advisory boards telling them to resign or be fired. 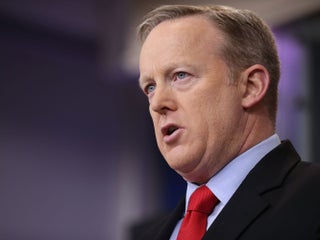 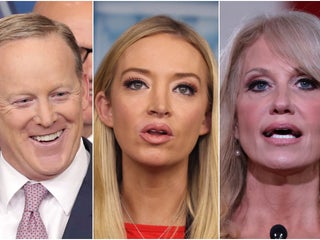 Sean Spicer resurfaced at the White House coronavirus briefing as a ‘reporter,’ and Trump dodged his question

Sean Spicer, the former White House press secretary, reappeared in the White House briefing room on Friday, but this time he was in a reporter’s chair. When the president called on Spicer, he referred to him as the reporter “in the back” and didn’t acknowledge that it was his former […] 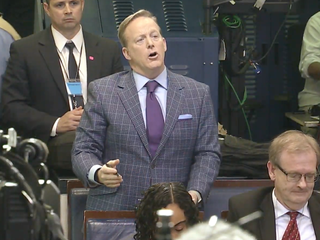 Trump praised Sean Spicer on his ‘Dancing With the Stars’ performance, then deleted his tweet when he got eliminated

Sean Spicer, the former White House press secretary, was voted off “Dancing With the Stars” on Monday night after three months on the show. President Donald Trump tweeted effusive praise for Spicer during Monday’s show and called on his followers to vote for him. But after Spicer was eliminated, Trump […] Former White House Press Secretary Sean Spicer made his dancing debut on ABC’s “Dancing With the Stars” on Monday night. In an ode to his last name, the former Trump official danced a salsa routine to the Spice Girls’ song “Spice Up Your Life.” Spicer said that he “had a […] Former White House Press Secretary Sean Spicer made his debut on ABC’s “Dancing With the Stars” on Monday night. People had mixed reactions to his appearance on the show, but it was his outfit choice that sent Twitter into a frenzy. Visit Business Insider’s homepage for more stories. Former White […] “Queer Eye” star Karamo Brown came under fire earlier this week for his comments regarding former Trump White House press secretary Sean Spicer – and Brown has now deleted his Twitter, seemingly as a result. The Fab Five member called Spicer “a good guy” in an interview earlier this week, […] “Queer Eye” culture expert Karamo Brown is facing a backlash after he called his “Dancing With the Stars” colleague Sean Spicer a “really sweet guy.” The former White House press secretary’s casting on the show has been the subject of much vitriol. “I was most excited to meet him [Spicer] […] Sean Spicer has joined the cast of ‘Dancing with the Stars’, and the host is upset the producers are politicizing the show

Former White House Press Secretary Sean Spicer was announced as a cast member on the upcoming season of “Dancing with the Stars” on Wednesday. Spicer became the butt of a joke at the cast reveal on “Good Morning America,” with host Tom Bergeron saying Spicer would be in charge of […] Reince Priebus, President Donald Trump’s first chief of staff, is officially in the Navy. Vice President Mike Pence on Monday swore Priebus in, and he has been commissioned as an ensign. Priebus, who’s also the former chairman of the Republican National Committee, will work as a human-resources officer, The Hill […] CNN White House correspondent Jim Acosta and President Donald Trump are in another fight. This time, the White House released an allegedly doctored video to spread a fake story that Acosta overly aggressive toward a White House intern managing the microphone during a press briefing Wednesday. The White House then […] ‘I’m going to f—ing send you to Afghanistan’: Jim Mattis reportedly lashed out at Sean Spicer when he kept asking him to go on television

Secretary of Defence Jim Mattis is not a fan of Sunday-morning talk shows. Apparently, that disdain for televised appearances resulted in a threat to a White House press secretary eager to see him on TV. According to the journalist Bob Woodward’s soon-to-be-released book, a partial passage of which was tweeted […] ‘Hey Sean, you’re a real piece of garbage’: Sean Spicer got heckled in New York on his book tour

Former White House press secretary was heckled and called a “piece of garbage” at a reading and signing for his new memoir at a New York City Barnes & Noble book store on Wednesday. “You lied as press secretary. Now you’re lying in your book,” the heckler shouted before being […] BBC host grills Sean Spicer: ‘You have corrupted discourse for the entire world by going along with these lies’ Sean Spicer’s new book details his time with Trump’s campaign and presidency, in an attempt to set the “record straight.” In “The Briefing: Politics, the Press and the President,” the former White House press secretary repeatedly praises Trump and calls him a “unicorn, riding a unicorn over the rainbow.” He […] Sean Spicer is planning a TV talk show, but it looks like nobody wants to be on it

Sean Spicer, President Donald Trump’s first White House press secretary, is planning a new TV show: “Sean Spicer’s Common Ground.” Judging from early reports, however, he is having trouble securing guests. The lawyer Michael Avenatti and the comedian Kathy Griffin already seem to have declined offers to appear on the […]

Former aides and officials from the Trump administration are finding new value stumping for Republican candidates, from the establishment wing to the fringes of the party. Having worked for Trump is a valuable commodity in a political climate where allegiance to the president is becoming a paramount issue for most […] Former White House press secretary Sean Spicer is ready to campaign for a bunch of Republicans this fall. “There are a lot of candidates I can help rally the troops for,” Spicer told Business Insider. Spicer left the White House last year. He has a book that will be released […]