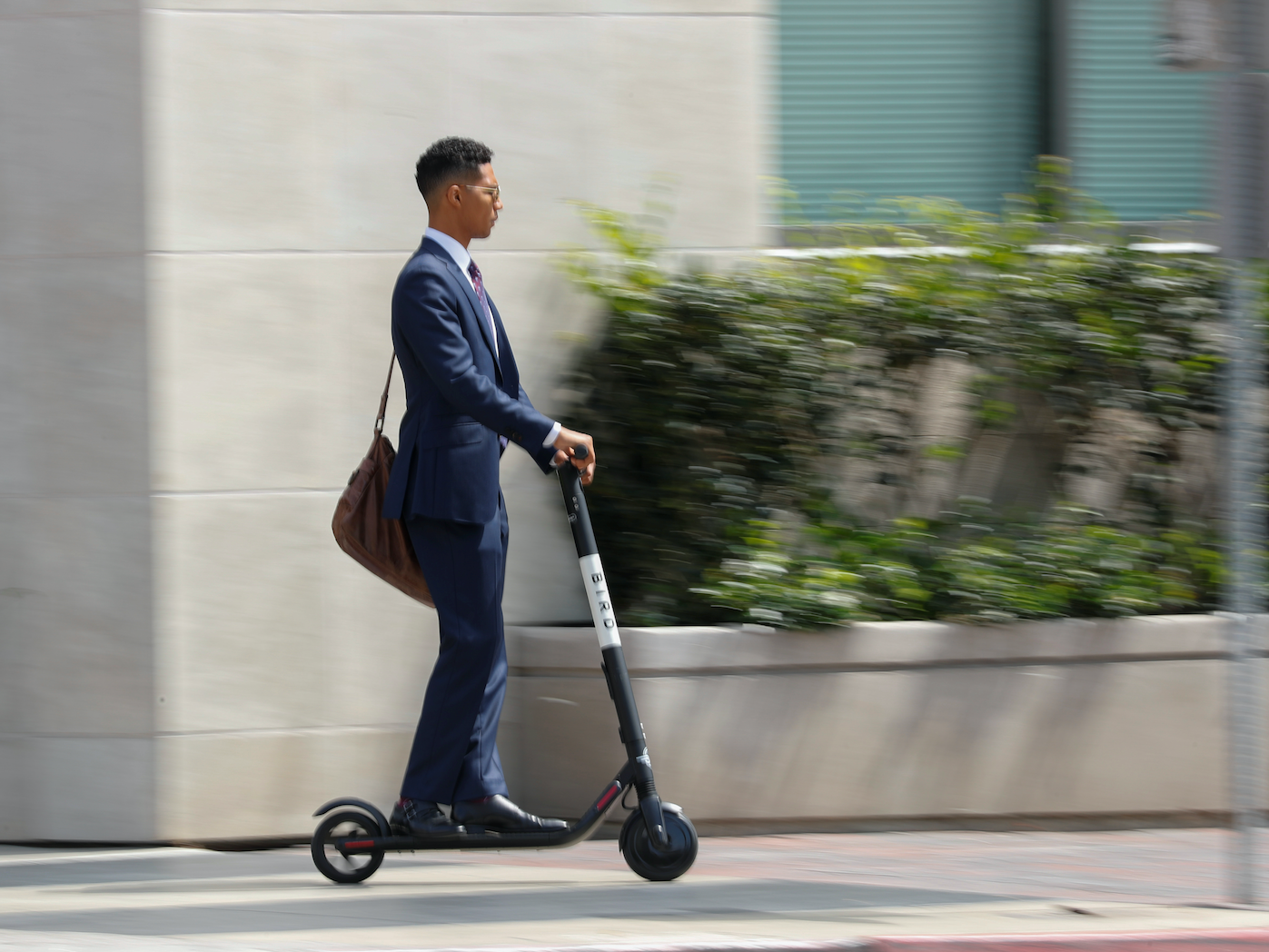 Four electric scooter companies dominate the scene in Los Angeles: Lime,Uber, Lyft, and Bird. On a trip to Los Angeles in December, I rode scooters from all four companies to compare the rider experience of each. Of the scooters I tried, Lyft’s provided by far the best experience. However, I’d […]
Tech Oct. 21, 2019, 12:20 AM

The sixth and final season of HBO’s tech satire “Silicon Valley” premieres on October 27. We attending a screening of the first episode of the season at an event with the show’s creators and several cast members in San Francisco on Wednesday. Mike Judge and Alec Berg, the show’s creators, […]
Tech Sep. 18, 2019, 8:47 PM

Mercedes-Benz will join the ranks of multibillion-dollar startups like Bird and Lime and bring out an electric scooter. The scooter is being developed in partnership with scooter manufacturer Micro. Mercedes-Benz didn’t give much detail about the model but said it would go on sale in “early 2020.” Electric scooters have […]
Tech May. 2, 2019, 12:00 AM

Bond Mobility announced Wednesday it raised $US20 million in Series A funding from DENSO’s New Mobility Group, which includes Toyota and Softbank. Bond Mobility cofounder Kirt McMaster was ousted as CEO of his last startup, Cyanogen, in the wake of reports the company exaggerated its success and misled investors. McMaster […]
Tech Dec. 14, 2018, 4:00 PM

A founder who survived the Chinese bike-sharing bubble is launching a scooter startup, and reckons it’s a $35 billion market

Dott is a new scooter and electric bike startup which has raised €20 million and will launch a trial service in Paris early next year. There are a lot of scooter startups fighting for market share right now, with major players Bird and Lime raising a collective $US870 million in […]
Tech Nov. 13, 2018, 4:09 AM

Lime executive Caen Contee has insisted the scooter startup has “the safest product” despite the firm issuing two product recalls this month. People reported handlebars falling off scooters and the vehicles catching light. Contee said the firm went through several hardware iterations to improve the product and was transparent about […]
Tech Sep. 18, 2018, 10:49 PM

US electric scooter startup Bird has just launched in Brussels. The company is quickly expanding across Europe in a bid to outgun well-funded rivals such as Lime, Uber, and Taxify. Passengers can hire Bird’s dockless electric scooters in cities by using an app, paying a small fee for hire and […]
Tech Sep. 6, 2018, 1:00 PM

Taxify, the European rival to Uber, is expanding into dockless scooters and launching them in Paris under the new Bolt brand. It marks an explosion of the scooter war in the French capital, where US startups Bird and Lime have already started to operate. Scooter startups are currently barred from […]
Tech Aug. 27, 2018, 6:14 PM

The buzziest startup idea in the US right now involves dumping hundreds of dockless scooters in a city and then hiring them out to people who want to make short trips. Scooter rental startups Lime and Bird were only founded last year but have raised million of dollars in funding […]
Tech Oct. 23, 2015, 1:22 AM

San Francisco is considering a measure that would limit the number of electric scooters available to rent in the city to 500 per company. It’s a response to the venture-backed electric scooter startups, which have become a nuisance for commuters, as the vehicles are left blocking footpaths or barring entryways. […]