Sam Nunberg, the adviser who came up with the Mexico wall idea, says he still wants to see it built — and that Trump would ‘kill’ Biden in a debate on border issues

Sam Nunberg, the adviser who devised the idea of Donald Trump’s border wall, has told Business Insider he still wants to see it built. Trump’s first mention of the wall was as a “fence” at a 2014 New Hampshire speech, which went down a storm with the audience. Nunberg has […] 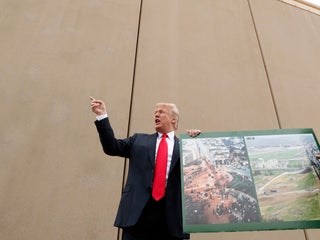 Sam Nunberg, a political advisor on President Donald Trump’s 2016 presidential campaign, told the New York Times that the concept of building a wall on the southern border of the US started as a way to get Trump to talk about immigration. Trump biographer Michael D’Antonio told The Times the […] Sam Nunberg, a former aide on President Donald Trump’s campaign, said Sunday that he does “sympathize” with Trump’s former personal attorney Michael Cohen, but he also hit back at Cohen’s recent moves against Trump. Nunberg defended the president and said recent revelations of a taped conversation between Trump and Cohen […] Sam Nunberg, a former aide on the Trump campaign, did a 180 on Sunday on previous statements about President Donald Trump and a June 2016 Trump Tower meeting between Trump campaign officials and Russians. Nunberg said he believed Trump’s denials of knowing anything about the meeting in advance. In March, […] Roger Stone, a former associate of Donald Trump, told another Trump associate in August 2016 that he had met with WikiLeaks founder Julian Assange. Special counsel Robert Mueller is reportedly looking into this alleged meeting. Stone said the statement was a joke and the meeting did not happen. Stone and […]

Former Trump campaign adviser Sam Nunberg said he will testify before a grand jury in the Russia investigation on Friday. He also said President Donald Trump “never did anything illegal or wrong” around him, but that based on questions investigators asked him, “they may have something” on Trump. Nunberg has […]

Republican strategist and former Trump adviser Roger Stone said Tuesday he was not involved in former campaign aide Sam Nunberg’s freewheeling media blitz before, during, or after the fact. Stone also said that he had no prior knowledge of WikiLeaks’ disclosures during the 2016 presidential election. “There is one trick […] Former Trump campaign aide Sam Nunberg said Tuesday he will cooperate with the special counsel Robert Mueller in the Russia investigation after being subpoenaed last week. Nunberg stunned observers and legal analysts Monday when he melted down during a media blitz. He said he would not cooperate with Mueller’s “witch […] Former Trump aide Sam Nunberg’s media blitz on Monday shocked America for its insight into the Mueller investigation. But it also offered insight into how Trump’s mind works. Nunberg has always been a “Trump whisperer,” and they share the same view on politics as a game. The way Nunberg is […] Former top Trump campaign aide Sam Nunberg said he will not be cooperating with special counsel Robert Mueller’s Russia investigation. Nunberg’s interviews on NBC and CNN on Monday went off the rails at times, as he grappled with a subpoena from Mueller and dished out harsh words for some of […] ‘I think it would be funny if they arrested me’: Former Trump campaign aide melts down on TV amid Mueller subpoena

Former top Trump campaign aide Sam Nunberg said on Monday that he will refuse to cooperate with a subpoena to appear before a federal grand jury investigating Russian interference in the 2016 election. Nunberg called the special counsel’s request “absolutely ridiculous” and said he would not participate with a “witch […] Then-presidential candidate Donald Trump’s main diet on the campaign trail included a lot of McDonald’s, Kentucky Fried Chicken, pizza, and Diet Coke, according to a new tell-all book written by former aides. The aides described detailed efforts to time the delivery of hot fast food with Trump’s departure from his […] President Donald Trump once abandoned a former aide at McDonald’s because his order took too long. The anecdote was a part of a new tell-all campaign book written by former top Trump campaign aides Corey Lewandowski and David Bossie. The former aide who was abandoned at McDonald’s, Sam Nunberg, would […]