A safari park in the UK is launching luxurious lodges this summer that will allow guests to sleep right alongside elephants and cheetahs. West Midland Safari Park‘s lodges will be a first for the UK, with each sleeping up to six guests. The lodges feature terraces and balconies as well […] 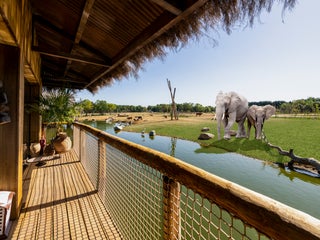 Forget Champagne and infinity pools: High-end travellers today want to make an impact on the places they visit, according to a luxury safari operator

Luxury travellers in 2019 want more than just Champagne and infinity pools, according to the business director of a luxury safari company. Chris Roche, the business development director at Wilderness Holdings, which owns luxury safari company Wilderness Safaris, told Business Insider that big-ticket travellers in 2019 have high expectations of […] There’s a new type of traveller dishing out thousands of dollars for high-end safaris. The business director of a Botswana-based company says it’s all because of the millennial tech boom. I visited the 3,200-mile volcanic crater considered Africa’s ‘eighth wonder of the world’ to see if it actually lives up to the hype

On a recent five-day safari in Tanzania, I visited the volcanic crater of Ngorongoro, a 100-square-mile basin called the “Eden of Africa” for its population of more than 25,000 large animals. While I was only able to visit the crater for five hours, it was a highlight of my safari […] I stayed in 3 very different lodges during my 5-day safari. Here’s what each place was like, from glamping in the savannah to a farmhouse on a coffee plantation

On a recent five-day safari in Tanzania, I visited the Serengeti, Ngorongoro, and Tarangire. With so much travelling, I ended up staying at three luxury lodges, each with a different flavour. In one, I stayed in private huts overlooking a salt lake; another had luxury tents on the edge of […] I went on safari in the Serengeti and the most unforgettable sight of the whole trip had nothing to do with lions, cheetahs, or leopards

Tanzania, in East Africa, is home to some of the greatest conservation areas and parks in the world. On a recent five-day safari, I visited three areas: the Serengeti, Ngorongoro, and Tarangire. The most breathtaking sight of the whole trip was the Great Wildebeest Migration, when 1.5 million wildebeest and […] On a recent five-day safari in Tanzania, I visited the Serengeti, 12,000 miles of grasslands teeming with wildlife, and witnessed the Great Wildebeest Migration. Animals on a safari are much further away than you might expect. I nearly ruined my trip by forgetting to bring binoculars and a telephoto lens […] I took 2,000 photos during a 5-day safari in Tanzania, and 1 of those photos is an important reality check for anyone thinking about going on a safari

Africa’s best-known safari destination is the Serengeti, 12,000 miles of grasslands, forests, swamps, and woodlands teeming with wildlife. Eighty per cent of tourists to Tanzania visit the Northern Circuit, where the Serengeti is located. During peak season the parks are flooded with safari jeeps. That meant that any time there […] A local guide in Tanzania gave me a tip for going on safari, and it’s the opposite of anything you’ve ever been told

Tanzania, and Africa’s, best-known safari destination is the Serengeti, 12,000 miles of grasslands, forests, swamps, and woodlands teeming with wildlife. On a recent trip to Tanzania, I was told by my guide that many repeat safari tourists end up preferring Tanzania’s far larger, Southern Circuit, which includes the 21,000-square mile […] Safaris may look like remote wilderness adventures in photos, but they can be full of tourists. Sometimes, animals get a little too close for comfort, while others may be less exotic than expected. Going on a safari is about embracing the unknown and appreciating the beauty of wildlife. Even when […]

In the middle of the Serengeti ... Most safari guides go for years without seeing a fight as intense as the one in the video below. I Saw Wildebeests Escape A Lion, But The Zebra Wasn’t So Lucky [credit provider=”Courtesy of Beho Beho”] The Selous Game Reserve in southern Tanzania is nearly four times the size of Serengeti National Park, but is relatively unknown on the safari circuit, especially to tourists visiting from the U.S. who tend to hit the more popular game-viewing parks in the north.It’s a […] [credit provider=”Courtesy of andBeyond” url=”www.andBeyond.com”] Sometimes called the “eighth wonder of the world,” Ngorongoro Crater is a must-see on Tanzania’s safari circuit.On a recent press trip to Tanzania, I had the opportunity to visit the crater — actually a massive caldera, formed nearly three million years ago following a volcanic collapse […] [credit provider=”Africa Adventure Company”] The perfect safari should involve plenty of up-close-and-personal encounters—ideally involving wild animals and not the strangers in the tent next door.Many high-end safari companies are responding to the yearning for even more exclusivity in what is already one of the world’s most elite travel experiences, offering […] [credit provider=”Urban Combing (Ultrastar175g) [flickr] ” url=”http://www.flickr.com/photos/paradisecircus/2853140260/”]It’s a classic case of foot-in-mouth disease.A Swedish politician used his Facebook page to call for an “underclass safari”, even soliciting suggestions and listing his own requirements for it, The Local reports. [credit provider=”flickr/ hector melo” url=”http://www.flickr.com/photos/chile-suecia/2981779469/”] Tourists visiting Sweden now have something new to add to their ‘must-do’ list.Allt åt Alla (“Everything for Everyone”) is now organising sightseeing tours through “lower class” central Stockholm (Fisksätra) to the weathier suburbs of Stockholm (Saltsjöbaden), in an attempt to debunk the myth of a classless Swedish society, […] OUT OF AFRICA: 10 Things NOT To Do While travelling On Safari

[credit provider=”exfordy via Flickr” url=”http://www.flickr.com/photos/exfordy/155936563/”] An African safari conjures images of Teddy Roosevelt in full khaki dress with a rifle, a herd of wild game, or more recently, the opportunity for a luxury vacation.travellers from all around the world go on safaris to experience the rich natural habitats that the […]