US Bureau of Land Management is returning to Washington, DC, reversing a Trump administration decision

The bureau, which oversees nearly one-fifth of public lands in the US and has more than 7,000 employees, is recalibrating after the loss of nearly 300 employees. 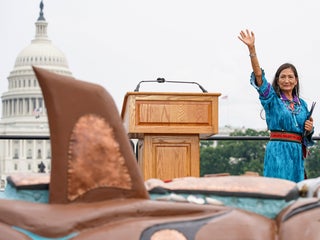 Former Secretary of the Interior Ryan Zinke, who just left his post, is now being investigated for potentially lying to his agency’s inspector general. Zinke, who resigned in December and left on Wednesday, was facing two inspector general inquiries when he left – one looking into his real estate dealings […] Secretary of the Department of the Interior Ryan Zinke will resign following a series of ethics investigations. Pete Davidson posted a note on Instagram that worried friends and fans. HQ Trivia founder Colin Kroll was found dead at age 34. It’s the end of the year, and the days are […] Trump’s Interior Department head Ryan Zinke is out. Here are the ethics probes that plagued the controversial secretary.

Interior Secretary Ryan Zinke is stepping down, President Donald Trump announced Saturday. Trump said Zinke would be leaving at the end of the year and his replacement would be announced next week. Zinke is at the center of several ethics probes, including misuse of taxpayer money, promoting projects to further […] Interior Secretary Ryan Zinke is stepping down, President Donald Trump announced Saturday. Trump said Zinke would be leaving at the end of the year and his replacement would be announced next week. Zinke is at the center of sharp scrutiny for a number of incidents that have sparked ethics probes, […] Top Trump official launches extraordinary personal attack on the Democrat set to be in charge of investigating him: ‘It’s hard for him to think straight from the bottom of the bottle’

Secretary of the Interior Ryan Zinke slammed Democratic Rep. Raúl Grijalva as a drunk after the congressman threatened to probe his department when Democrats take the House majority in January. Grijalva is the likely incoming chairman of the House Natural Resources Committee and called for Zinke’s resignation in an op-ed. […] Interior Department secretary Ryan Zinke reportedly plans to resign by the end of 2018, and is said to have eyes on a job at Fox News

Interior Secretary Ryan Zinke is exploring a job opportunity with Fox News as a contributor, sources familiar with the situation told Politico. One source told Politico that Fox News was unlikely to hire Zinke unless President Donald Trump asks Rupert Murdoch, the CEO of Fox’s holding company. An Interior Department […] The Arctic is open for business: the Trump administration will allow drilling in federal waters off the coast of Alaska

The US just proposed opening federal waters off Alaska’s coast for drilling. If the deal goes through, Hilcorp Energy would build a gravel drilling island less than 30 miles from the coast of the Arctic National Wildlife Refuge. No one knows exactly how much oil Alaska really has. It’s a […] President Donald Trump’s administration wants to roll back critical protections for endangered species. Interior Department Secretary Ryan Zinke proposed a set of changes last week to the 45-year-old Endangered Species Act (ESA), which could undermine the basis of the law and put a number of endangered species at risk of […] Interior Secretary Ryan Zinke and Democratic Rep. Ruben Gallego of Arizona appeared to have a friendly dig at each other’s military service. Zinke served in the US Navy and Gallego in the US Marine Corps. The GOP appeared to take the verbal exchange seriously on social media. Republicans posted a […] $1 million in private flights and a $31,000 table — here are the 6 Trump Cabinet members under scrutiny for their lavish spending of taxpayer money

Scrutiny over how some members of President Donald Trump’s cabinet have spent taxpayer money isn’t dying down. The latest official to come under the microscope is Treasury Secretary Steve Mnuchin, who was found to have cost taxpayers more than $US1 million in combined airfare after taking eight separate government trips […] Trump inexplicably exempted Florida from the massive offshore drilling overhaul, and some of his fiercest allies are pushing back

Ryan Zinke, Trump’s interior secretary, announced Tuesday that Florida would be exempt from a new plan to expand offshore drilling in US waters after he spoke to Republican Gov. Rick Scott. The new plan, and Florida’s exemption, was blasted by lawmakers of both parties in coastal states. On Tuesday, Interior […] GOP congressman: Trump may have exempted Florida from offshore drilling because of Mar-a-Lago

The Trump administration decided to exempt Florida from new plans to open up the US to more offshore drilling. GOP Rep. Mark Sanford of South Carolina suggested that the change was politically-motivated. Sanford also told CNN the move may be “self-serving” since Trump has properties, such as Mar-A-Lago, along the […] Last week, the Trump Administration announced a plan to potentially open 98% of US waters to offshore drilling. Florida Governor Rick Scott quickly voiced his opposition, as did many other coastal governors. Interior Secretary Ryan Zinke now says Florida’s Gulf and Atlantic coasts will be off-limits to drilling because the […] Interior Secretary Ryan Zinke reportedly spent $6,250 on a government helicopter ride so he could go horseback riding with Mike Pence

Secretary of the Interior Ryan Zinke spent thousands of taxpayer dollars on government helicopter rides, Politico reported. During one trip, the report says, Zinke ordered a helicopter to get back to Washington in time to ride horses with Vice President Mike Pence. Zinke was already under investigation by the Department […] President Donald Trump announced the reduction of two national monuments in Utah in December. Bears Ears was reduced by 85% in the months that followed, in the largest acreage reduction of a national monument to date. Trump also cut Grand Staircase-Escalante National Monument in half, following a push led by […] President Donald Trump’s administration has dramatically reduced the size of Bears Ears National Monument and Grand Staircase-Escalante National Monument – the largest reduction of protected land to date. Some presidents have made conserving land a priority, while others have opted not to use their power to do so. Here are […]