The biggest moment of ‘The Walking Dead’ finale was shockingly brief. The showrunner and star know fans may be a bit frustrated.

Warning: There are major spoilers ahead for “The Walking Dead” season 10 finale, “A Certain Doom.” Beta met his end on Sunday’s episode when he was killed by Daryl. Some fans may be frustrated that the scene between Negan, Daryl, and Beta – three fan favourites – was over before […] 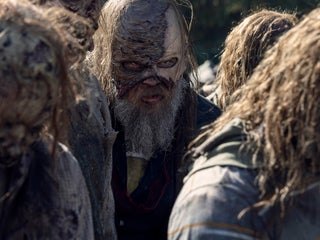 Warning: There are major spoilers ahead for “TWD” season 10 finale, “A Certain Doom.” Ryan Hurst’s villainous character Beta was finally killed off AMC’s zombie drama. Hurst teased to Insider we may see him again in “TWD” universe. He said he’d “absolutely” return to that world again if given the […]

Warning: There are spoilers ahead for “The Walking Dead.” Beta (Ryan Hurst) and Negan (Jeffrey Dean Morgan) will share screen time on “TWD” this season. Hurst told Insider the first episode where they meet will be “one of the funniest episodes” of the show because of the differences between the […] INSIDER spoke with Ryan Hurst, who plays a threatening-looking Whisperer named Beta, on “The Walking Dead.” Hurst shared how he helped have input on bringing the character’s look to life from the comics. Though the comic character is about seven-feet tall, Hurst says nothing was used to manipulate his height […]

Ryan Hurst joined “The Walking Dead” to play Beta, one of the major new villains on the show. A longtime fan of the show, Hurst told INSIDER he asked his manager about a year ago to cold call the producers to tell them he wanted to be on the AMC […]