The Trump DOJ filed for the journalists' records on December 22, 2020 - William Barr, who had been a loyal Trump ally, left office the next day. 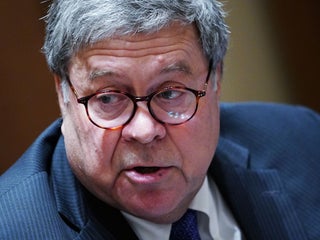 Americans have less freedom now because of Trump and Russian election interference, a new report warns

The United States now has less freedom because of the Trump Administration and Russian interference in the 2016 presidential election, according to a democracy rights group. Overall, the US’s freedom rating dropped from 89 to 86 because its political rights dropped from 36 to 33, according to an annual Freedom […] The data Cambridge Analytica harvested from Facebook was accessed in Russia, the UK’s Information Commissioner’s Office has confirmed. British lawmaker Damian Collins told CNN that investigators now need to establish who accessed the Facebook profiles, how they used them, and whether it played a role in the US election. Aleksandr […] Facebook CEO Mark Zuckerberg had previously called the idea that Facebook had inadvertently influenced the 2016 election “crazy.” But it turns out Facebook had touted its influence in other elections as “success stories,” until the tab displaying them was taken down. Facebook and the ads Russia bought on the site […] Sign up for the latest Russia investigation updates here. Secretary of State Rex Tillerson reportedly didn’t use $US60 million that Congress authorised for transfer from the Pentagon to the State Department in order to fight Russian influence. In sum, the State Department spent a whole year trying to decide how […] President Donald Trump and others have frequently blamed former President Barack Obama for a weak response to Russian election meddling in 2016 under his watch. Obama’s former chief of staff is now blaming Sen. Mitch McConnell for failing to sign on to a tough statement rebuking Russia, saying he was […] Twitter found more than 50,000 Russia-linked accounts that actively shared election-related material — and Trump interacted with them hundreds of times

Twitter says it found more Russia-linked accounts that shared US election-related material during the 2016 race for the White House. The social-media platform published the analysis on its blog Friday. In addition to other findings, Twitter said it discovered 13,512 accounts engaged in what it believed to be “automated, election-related […] President Donald Trump’s daily briefing is reportedly structured to avoid the issue of Russian meddling in the 2016 US election in order to keep the president from derailing the meetings. Sometimes intelligence on Russian interference is included in the written briefing but not in the oral briefing the president receives. […] There are likely "a lot more" fake...