On Tuesday night’s episode of “Roseanne,” Roseanne thinks that her neighbours of Muslim descent are building a bomb. The episode has multiple racially insensitive jokes that a Muslim American writer on Twitter called “dangerous.” Roseanne Barr quickly came to the episode’s defence, saying that her show tells “real stories” about […] Roseanne Barr defends her vocal Trump support in Jimmy Fallon interview: ‘I don’t give a f—‘

Roseanne Barr told Jimmy Fallon on Monday’s “Tonight Show” that she “doesn’t give a f—” about negative perceptions of her vocal support for President Trump. “This is America, it’s a free country, and when you weigh it all together, I just felt like we needed a whole new thing,” Barr […] Roseanne Barr scoffs at New Yorker criticism, saying writer of controversial ‘Roseanne’ joke has been ‘sent to the gulag’

The New Yorker television critic Emily Nussbaum criticised the “Roseanne” reboot for the joke it made about ABC’s minority-led comedies “Black-ish” and “Fresh Off the Boat.” Roseanne Barr replied to a tweet about the article, and said the writer of the joke had been “sent to the gulag.” Nussbaum said […] ‘Roseanne’ showrunner responds to criticism of Roseanne Barr’s political views: ‘Nobody is making anybody watch the show’

“Roseanne” co-showrunner Bruce Helford downplayed the significance of Roseanne Barr‘s controversial political views in relation to the ABC sitcom’s viewership, in a new interview with The Hollywood Reporter. Barr has sparked controversy for her online promotion of far-right conspiracy theories and her vocal support of President Trump, while “Roseanne” premiered […] ABC executives told The New York Times that the “Roseanne” reboot was a direct result of President Trump’s election. Executives met the morning after Trump’s victory to discuss the future of the network. The reboot’s premiere scored big ratings on Tuesday with over 18 million viewers. ABC executives say the […] Roseanne Barr is under fire for appearing to promote a far-right conspiracy theory about the Parkland school shooting activist David Hogg. In a since-deleted tweet, Barr wrote the words “NAZI SALUTE” in response to a conspiracy theorist’s post that tagged Hogg. Barr’s tweet seemed to reference a debunked conspiracy that […] Roseanne Barr has a history of supporting President Donald Trump, as well as promoting popular online right-wing conspiracy theories. Barr received a congratulatory call from Trump on Wednesday for the ratings success of the premiere of “Roseanne,” the revival of her ABC sitcom, in which she plays a Trump supporter. […] “Roseanne” is returning to the airwaves later this month with the original cast. To promote the show’s return, NASCAR has renamed Saturday’s Xfinity race the “Roseanne 300.” The naming creates the odd situation of Fox airing and promoting a race that is promoting a TV show that airs on a […] 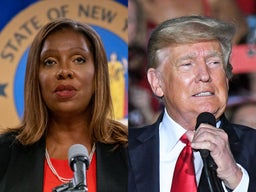