Romney was one of 9 Republicans who voted to convict Trump in his second impeachment trial following the January 6 Capitol Riot. 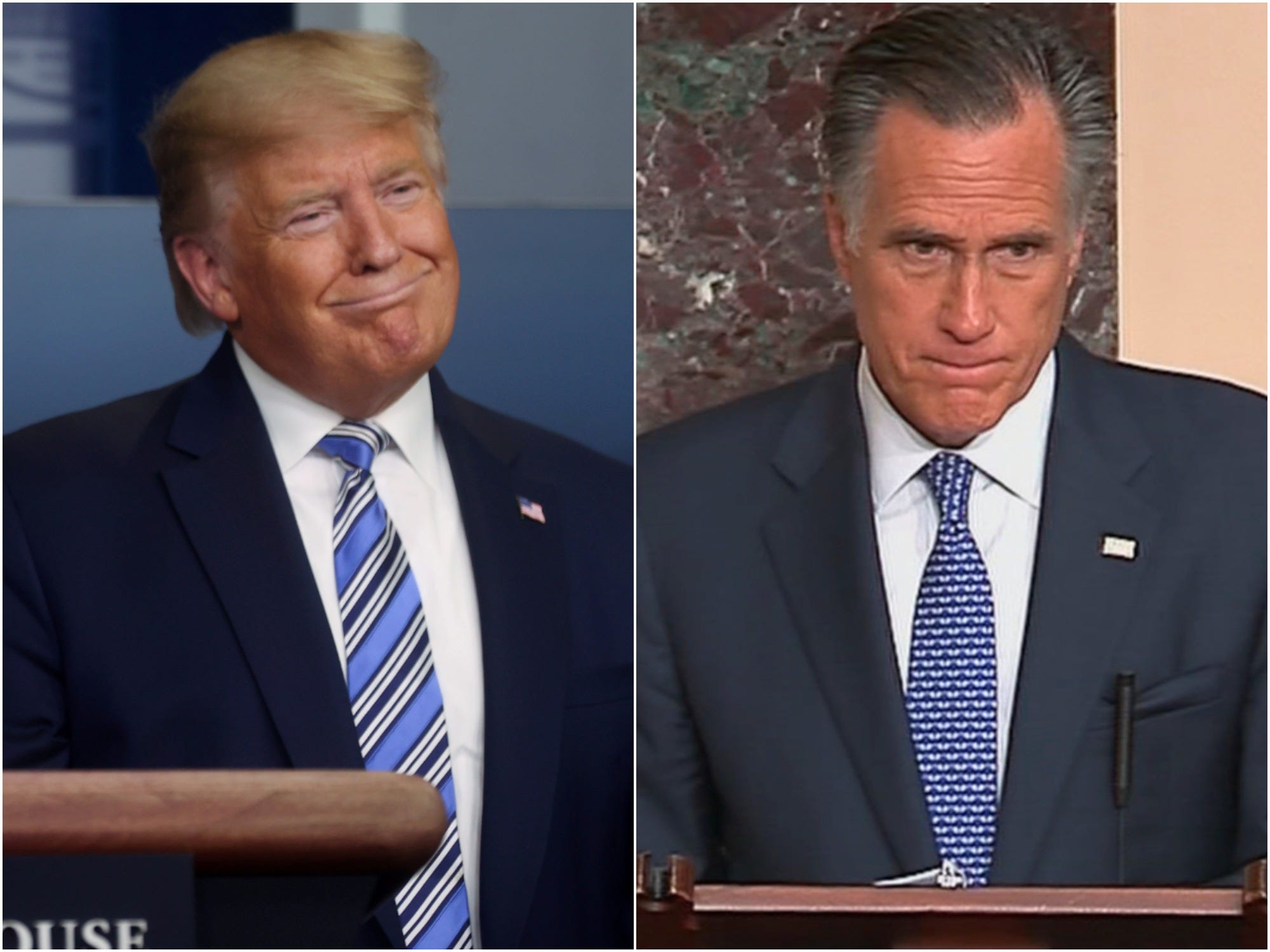 The former president made a dig at the Utah senator in a statement, calling Romney a RINO (or Republican-in-name-only) again. 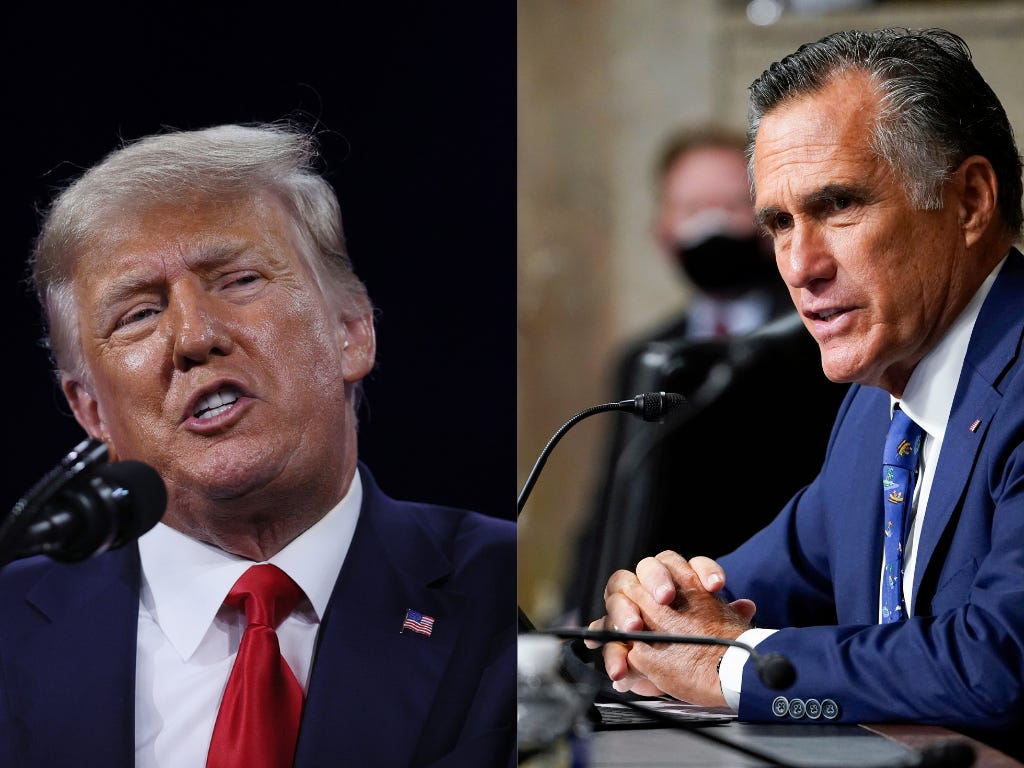 The benefits of Biden’s child allowance could be worth 8 times its cost, new report finds 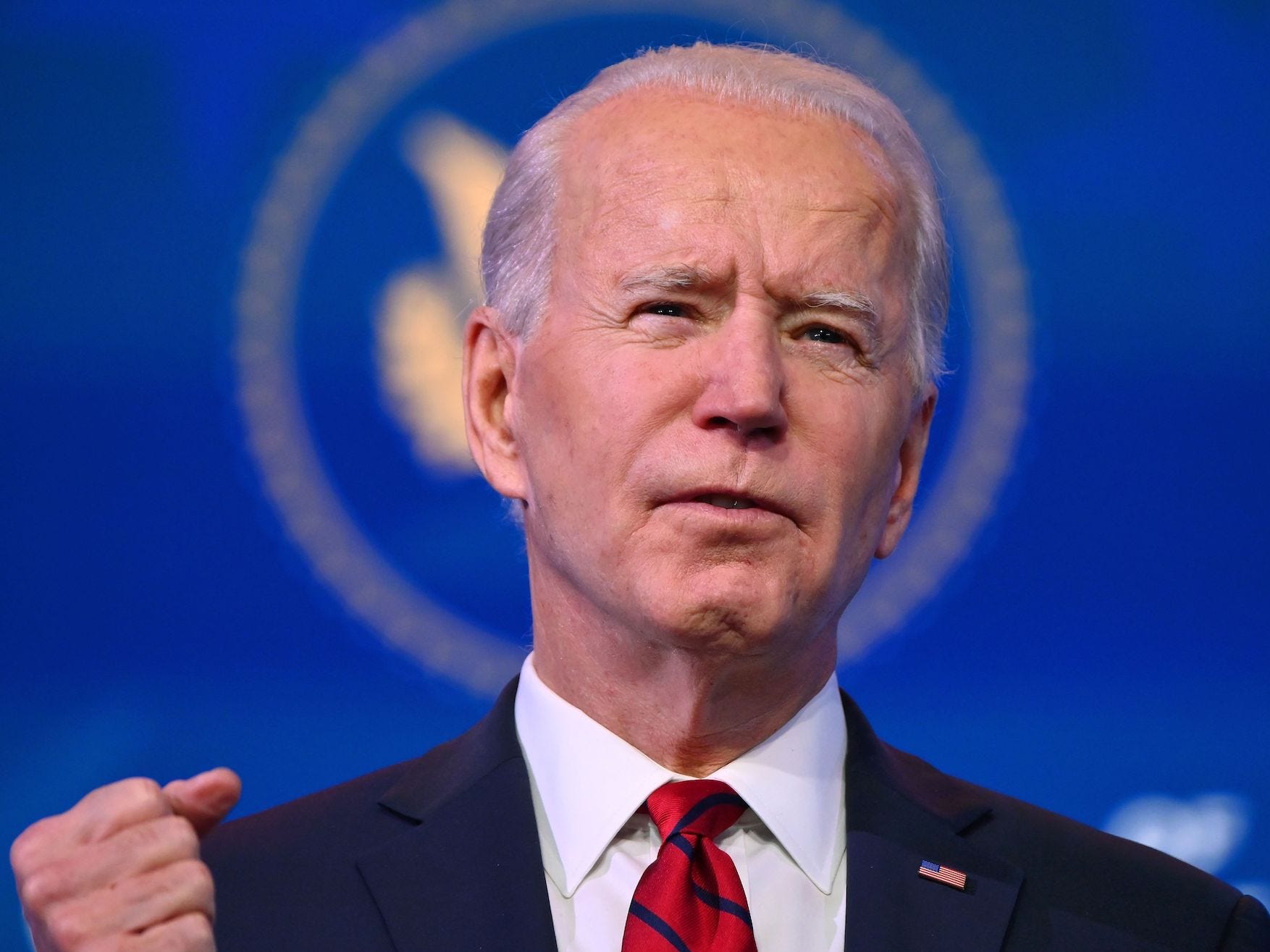 Mitt Romney scolds Republicans as pro-Trump rioters breach the Capitol building, disrupting the election certification: ‘This is what you’ve gotten’

Sen. Mitt Romney yelled “this is what you’ve gotten” at Republicans as pro-Trump rioters stormed the Capitol building Wednesday, Vanity Fair reported. A handful of Republican politicians have supported Trump’s conspiracy theory that President-elect Joe Biden’s electoral victory is fraudulent. The Capitol erupted into chaos when rioters breached the doors, […] 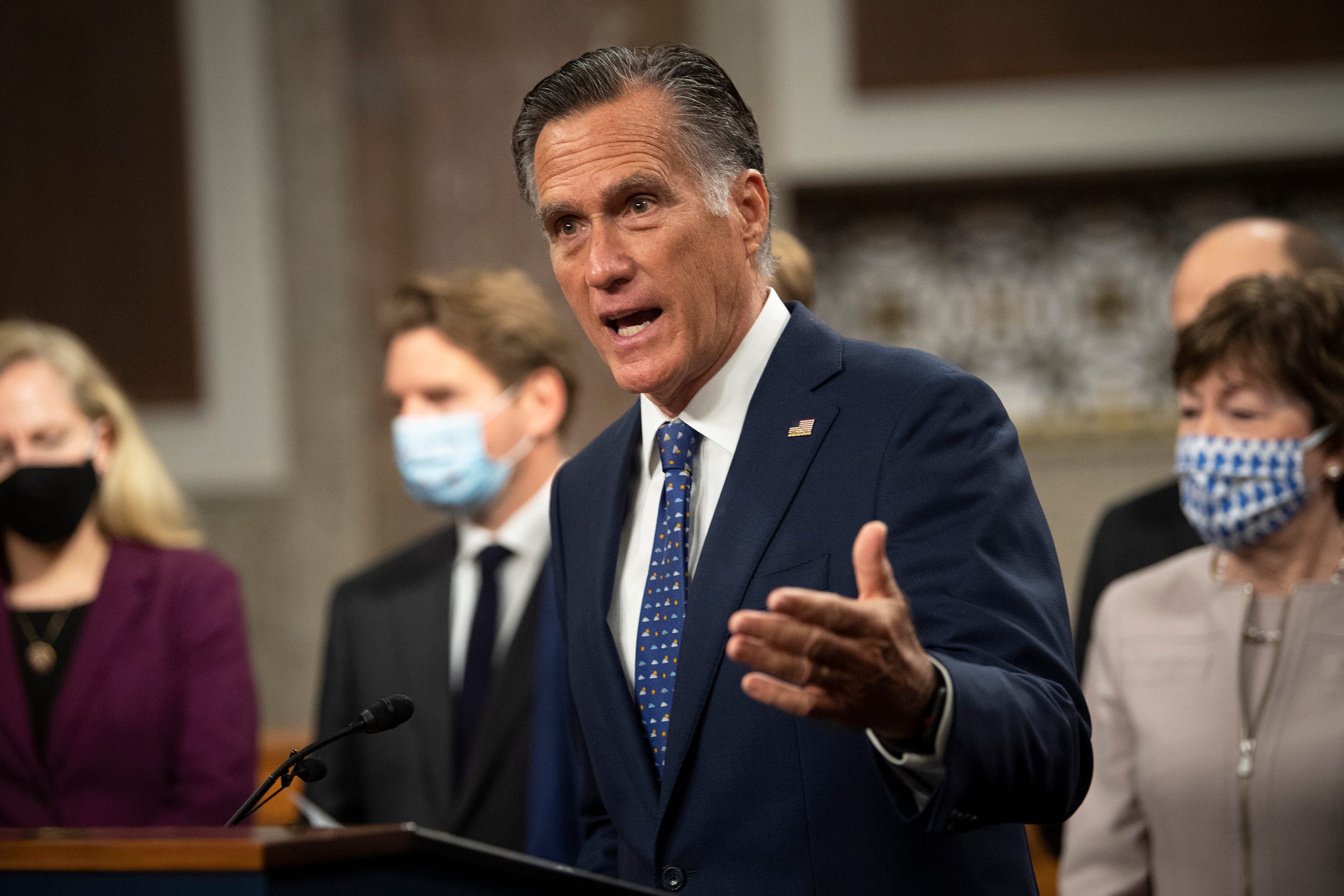 Sen. Mitt Romney of Utah said it would be “madness” for Republicans to protest the Electoral College vote set to certify President-elect Joe Biden’s win. “Trying to get electors not to do what the people voted to do is madness,” Romney said, according to NBC News. Since the election, President […] 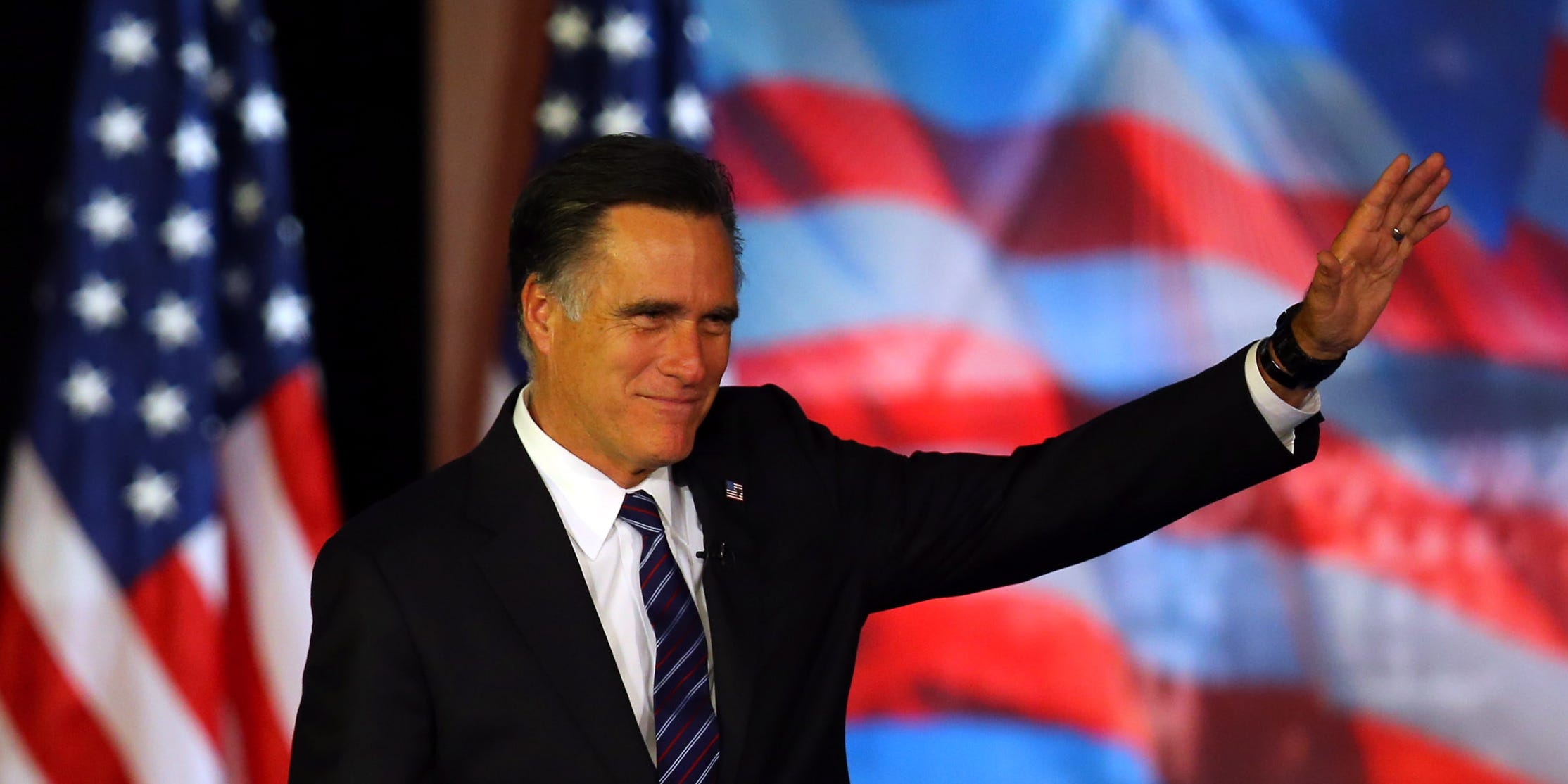 On the website PredictIt, people can place bets – with real US dollars – on big political events. Users on the site place “yes” or “no” bets on popular political predictions, like President Trump’s impeachment trial. People are betting that there’s a 10% chance the Senate will convict him in […] Republican Mitt Romney is the first Republican to condemn Trump’s Ukraine call over Biden, saying ‘it would be troubling in the extreme’

A scandal has been building over President Donald Trump’s July 25 call with Ukraine’s new president. Trump is believed to have pressured Ukraine’s Volodymyr Zelensky to investigate the Democratic presidential candidate Joe Biden’s son. Sen. Mitt Romney of Utah just weighed in, becoming the first major Republican politician to do […] [credit provider=”Justin Sullivan/Getty Images”] Later today, Americans will finally get to meet the cater-waiter who recored and then leaked the video revealing Mitt Romney’s now infamous “47 per cent” comments.The man, whose identity is being withheld until he appears on MSNBC’s “The Ed Show” on Wednesday night, was a bartender who was working […] REPORT: Another Romney Is Considering A Bid For John Kerry’s Senate Seat 15 Gifts For The Political Junkie In Your Life

Do you have a politically obsessive person on your list this year? [credit provider=”Getty Images”] Ahead of the election, Mitt Romney scored well on economic issues – with many polls saying Romney was viewed as better for the economy than Barack Obama. It appears Democrats in the Senate and House are heeding those results. A plan presented by Romney and embraced by […] The Pew Forum on Religion in Public Life came out with their report on how the country’s different religious groups voted in the presidential election, and there’s statistic in there that is pretty surprising. Here’s The Bloomberg Businessweek Cover If Romney Had Won

Everyone is talking about the disturbing Bloomberg Businessweek cover showing an aged and very grey President Obama with the headline “The Next Four Years.” After Mitt Romney lost the presidential election to Barack Obama last night, video streaming company Roku decided to rub salt in his wounds by releasing an online ad platform that calls out the loser. [credit provider=”AP”] Dennis Gartman, the publisher of the widely-read “Gartman Letter,” writes in today’s newsletter that he was wrong by predicting that Romney would win the election “quite handily.” However, this is where Gartman thinks Romney failed (emphasis ours):