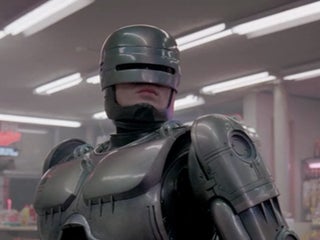 A US police force has deployed an egg-shaped robot to patrol a park, and Elon Musk is sceptical

California’s Huntington Park police department has launched on an egg-shaped robot named Robocop. The robot is equipped with 360-degree camera vision, which it can live-feed back to the department or record. Elon Musk tweeted a gif of the Terminator in response to a story about the robot. Visit Business Insider’s […] No one wanted to go out and see Colin Farrell’s Valentine’s Day flick “Winter’s Tale.” The Warner Bros.’ picture flopped over President’s Day weekend bringing in $US8.1 million. The film was estimated to cost $US60 million to produce. In comparison, both of Kevin Hart’s releases — “Ride Along” and “About […] It’s been 27 years since the original “RoboCop” hit theatres. Paul Verhoeven’s 1987 R-rated classic gave us exaggerated gore, a vision of a crumbling Detroit, and one of the corniest — yet catchiest — taglines in “I’d buy that for a dollar.” With the remake in theatres this week, we’re […] It’s going to be a close weekend at the box office this weekend — at least for second and third place. While “The LEGO Movie” is expected to reel in audiences for the second week in a row, there’s a three way battle for the romantic film to see. Here […] “RoboCop” returns to theatres this week in a big reboot from Sony. The first reviews for José Padilha’s take on the 1987 film are out and it’s not sounding like a must see. The movie, starring Joel Kinnaman (“The Killing”), Gary Oldman, Michael Keaton, and Samuel L. Jackson, has received […] New ‘RoboCop’ Trailer Makes Us Really Excited About The Reboot

The new RoboCop trailer is here and it looks pretty good! MGM and Sony Pictures are releasing the reboot starring Joel Kinnaman (“The Killing”) as Detective Alex Murphy. Gary Oldman, Michael Keaton, and Samuel L. Jackson also star. The remake of the 1987 film is being directed by José Padilha […] Gotham has Batman, New York City has Spider-Man, and Detroit has RoboCop. A 10-foot tall bronze statue of cyborg crime fighter Alex Murphy is coming to Detroit next summer thanks to a bunch of devoted fans and a Kickstarter fundraising campaign. The project came about after someone tweeted to Mayor […] The First Full Trailer For The ‘RoboCop’ Reboot The first photos of the “RoboCop” reboot suit hit the Web and it looks nothing like the suit of the 1987 action film.