Prostitution charges against Patriots owner Robert Kraft in a Florida massage parlor scandal were quickly dropped, but sex workers in the case were forced to pay thousands of dollars in fines

Charges were brought against the New England Patriots owner Robert Kraft, 24 other men, and employees at Orchids of Asia Day Spa and Massage in Jupiter, Florida, last year. At the time, Florida state prosecutors said the men paid for the employees to perform sex acts on them. Charges against […] 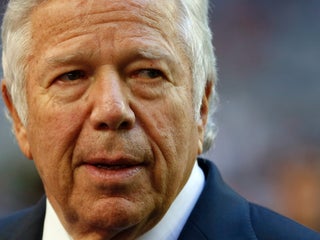 A Florida judge said that Robert Kraft’s massage parlor surveillance videos will not be released, despite various media outlets seeking the footage

A Florida judge granted an order on Monday to prevent the release of New England Patriot owner Robert Kraft’s massage parlor surveillance videos. Kraft was charged in February with soliciting prostitution as part of a larger sex trafficking ring spanning at least 10 spa and massage parlors across the state. […] A judge temporarily halted the release of the police surveillance videos of Robert Kraft in a Florida massage parlor, after prosecutors said that they planned to release that footage. Kraft was charged in February with soliciting prostitution as part of a larger sex trafficking ring spanning at least 10 spa […]

New England Patriots owner Robert Kraft was charged Friday with two counts of prostitution in relation to an alleged sex-trafficking ring run through spa and massage parlors in Florida. These types of parlors are openly discussed in online forums like RubMaps, which police used to track the Florida locations. On […]

Robert Kraft was reportedly seen leaving television executive Barry Diller’s pre-Oscars lunch on Saturday. It was the first time that the New England Patriots owner was seen since Jupiter, Florida police on Friday named him as one of the suspects in a major prostitution and sex trafficking bust. The 77-year-old […]

An illicit massage website, rubmaps.com, helped Florida police break up a multi-agency sex trafficking and prostitution ring. The investigation led police to arrest New England Patriots owner Robert Kraft and charge him with two counts of solicited prostitution. He was allegedly a customer at Orchids of Asia Day Spa, which […]