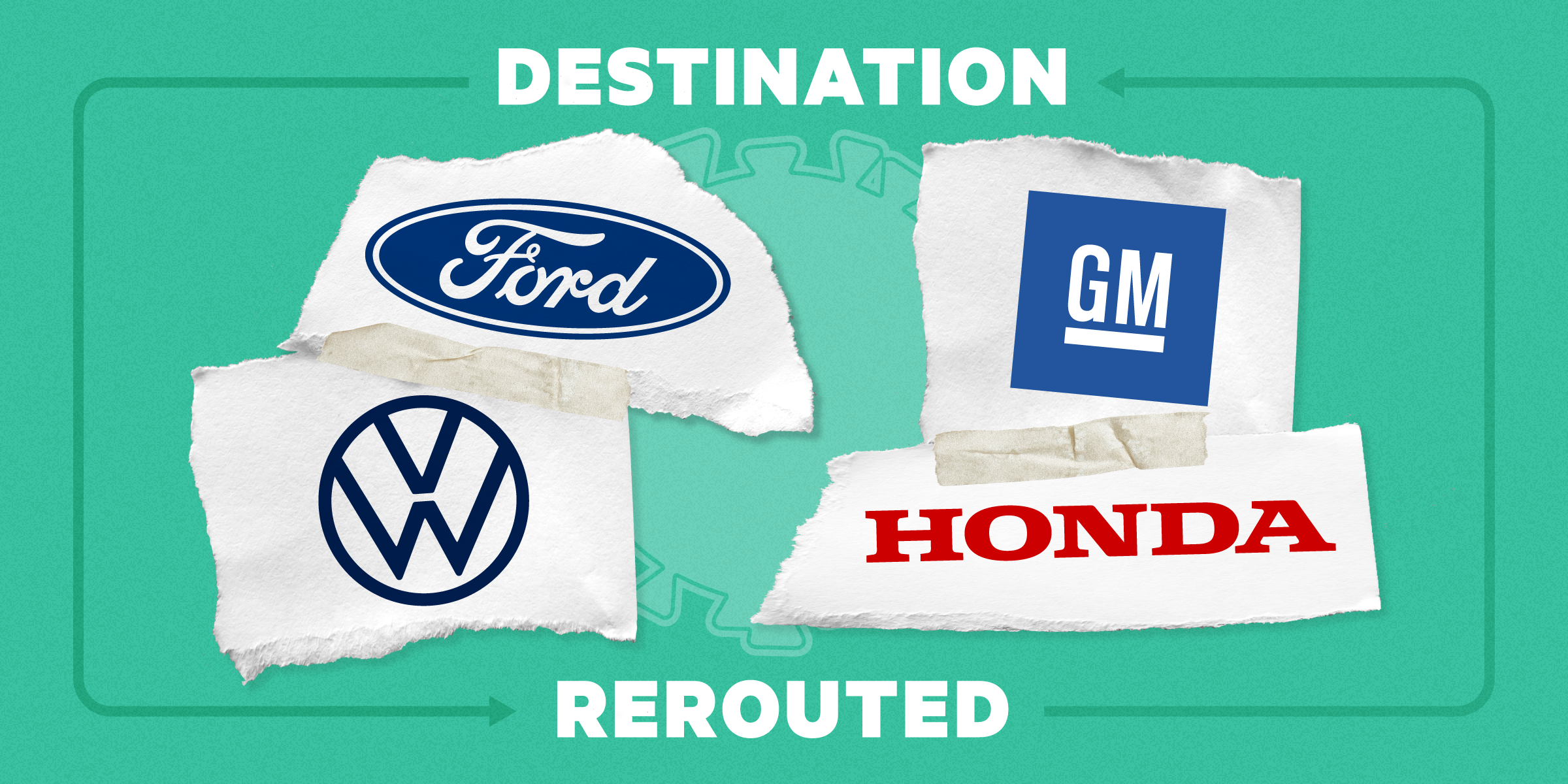 High-level Nissan executives have intensified the process of making contingency plans for a potential dissolution of the automaker’s alliance with Renault, the Financial Times‘ Peter Campbell, Leo Lewis, and Kana Inagaki reported. The process has reportedly become more urgent since Carlos Ghosn, the former head of the Renault-Nissan alliance, fled […]
News Jan. 9, 2020, 5:27 AM

The Japanese justice minister Mori Masako published a statement responding to a press conference Carlos Ghosn delivered on Wednesday, during which he railed against Nissan and Japan’s justice system. The statement urges Ghosn to “engage in all possible efforts to make his case within Japan’s fair criminal justice proceedings,” and […]
News Jan. 9, 2020, 1:19 AM

Carlos Ghosn, the fugitive former Nissan executive facing charges of financial malfeasance in Japan, painted a picture of a corporate plot between his former employer and Japanese prosecutors in his first public comments on the case on Wednesday. In a long press conference in front of international news outlets, Ghosn […]
News Jan. 4, 2020, 6:06 AM

A security expert reveals the possible thinking behind Carlos Ghosn’s wild escape from Japan, which involved 2 planes and a mad dash between Turkey and Lebanon

Carlos Ghosn, the former head of the Renault-Nissan-Mitsubishi alliance, fled Japan for Lebanon on Sunday. Whoever planned Ghosn’s escape was likely skilled, Tulane University professor and security expert Robert Allen said, but this probably wasn’t the work of a reputable security company, which would not want to risk the reputational […]
News Jan. 3, 2020, 10:15 AM

The allegations that Carlos Ghosn, the former head of the Renault-Nissan-Mitsubishi alliance, underreported his income at Nissan and used company money for personal gain are not surprising, former General Motors vice chairman Bob Lutz told CNBC on Thursday. Over time, Ghosn’s ego has inflated, Lutz said, and Ghosn has developed […]
News Jan. 3, 2020, 4:26 AM

Carlos Ghosn‘s family did not help him escape from Japan to Lebanon, the former head of the Renault-Nissan-Mitsubishi alliance said through a representative. The Wall Street Journal, citing sources familiar with the matter, reported on Thursday that his wife had been involved in the operation. Ghosn had been awaiting trial […]
News Jan. 1, 2020, 3:15 AM

Former Renault-Nissan-Mitsubishi Chairman Carlos Ghosn has fled Japan, where he had been awaiting trial after a 2018 arrest on allegations of financial malfeasance. In a statement, Ghosn confirmed that he was in Lebanon, where he is a citizen. Lebanon doesn’t permit its citizens to be extradited to Japan, so Ghosn’s […]
News Sep. 24, 2019, 1:30 AM

The SEC announced a settlement in an investigation into a $US140 million compensation-fraud scheme involving former Nissan chairman Carlos Ghosn, Nissan director Greg Kelly, and the company itself. All parties under investigation paid fines and agreed to SEC conditions without admitting or denying the allegations. Ghosn was ousted as chairman […]
News Jun. 20, 2019, 4:00 PM

Waymo, Renault, and Nissan announced a plan to explore mobility services in France and Japan. Waymo has already joined with Fiat Chrysler Automobiles and Jaguar Land Rover. “This is an ideal opportunity for Waymo to bring our autonomous technology to a global stage, with an innovative partner,” Waymo CEO John […]
News Jun. 7, 2019, 12:44 AM

On Wednesday, a merger between Fiat Chrysler Automobiles and Renault collapsed – and collapsed swiftly. Both companies issued terse explanations, but FCA explicitly blamed French politics. The major challenge with the proposed deal was always going to be with the French government, which controls 15% of Renault and, with populism […]
News May. 29, 2019, 12:02 AM

The proposed Fiat Chrysler-Renault merger pits the declining logic of globalism against surging worldwide populism. Immediately after the merger plan was revealed, the French and Italian governments moved to secure jobs. But the only way this merger works is for the combined companies to streamline costs, and that has to […]
News May. 28, 2019, 3:10 AM

FCA and Renault announced plans to execute a 50/50 merger that would create the world’s 3rd-largest automaker. Renault is in a longtime alliance with Nissan and Mitsubishi; that alliance could be ending, as its engineer, Carlos Ghosn, awaits trial in Japan. On its face, the proposed merger looks like a […]
Markets Jan. 8, 2019, 1:00 PM

Carlos Ghosn, the ousted Nissan chairman, who is facing multiple allegations of financial misconduct, spoke publicly for the first time since he was arrested in Japan on November 19. “I have acted honorably, legally, and with the knowledge and approval of the appropriate executives inside the company,” Ghosn said Tuesday […]
News Jan. 8, 2019, 7:46 AM

Former Nissan and Mitsubishi Motors chairman Carlos Ghosn will reportedly speak in front of a Japanese court for the first time on Tuesday. Ghosn remains the chairman and CEO of Renault. Ghosn will speak for 10 minutes and is expected to declare his innocence, Bloomberg reported. These will be the […]

The former Nissan chairman Carlos Ghosn is expected to spend New Year’s Day in a Tokyo jail, after a court chose to extend his stay until January 11, in the wake of new allegations of financial misconduct, The Asian Nikkei Review reports. Ghosn has been behind bars since November and […]
News Dec. 22, 2018, 3:04 AM

Even if deposed Nissan chairman Carlos Ghosn did everything he’s accused of, he shouldn’t still be in a Japanese jail

Former Nissan chairman Carlos Ghosn was arrested in Japan last month on allegations of financial misconduct. He’s been re-arrested several times and remains in a Japanese jail. Nissan has deposed him as chairman, but the Renault side of the Renault-Nissan-Mitsubishi alliance has stood by him. Last month, Carlos Ghosn was […]
News Dec. 18, 2018, 7:43 AM

Carlos Ghosn flew around the world using a series of Nissan-owned Gulfstreamprivate jets, reporting from the Wall Street Journal and records with the Federal Aviation Administration show. All of the Gulfstream jets Nissan acquired for Ghosn and other executives are known to have used the custom registration number N155AN. The […]
News Dec. 14, 2018, 3:04 AM

Carlos Ghosn, head of one of the world’s largest automaker alliances, was arrested in Japan last month on suspicion of financial crimes. Renault’s board of directors said Thursday he will remain chairman and CEO until a further review is completed. Carlos Ghosn will remain CEO of the Renault for the […]
News Nov. 26, 2018, 6:03 AM

Carlos Ghosn, the architect of the Renault-Nissan-Mitsubishi alliance, was arrested in Japan last week. Nissan alleged that he had engaged in years of financial misconduct. He has yet to be charged. Ghosn is an auto-industry legend, and if he falls, it would the most spectacular demise in the history of […]
Next Page »