Micarah Tewers is a seamstress who re-creates celebrity gowns and Disney princess dresses – and many cost her less than $US20 to make. Tewers shares dressmaking tutorials on her YouTube channel, and her videos have gotten millions of views on the platform. She makes each dress from scratch using thrift-store […] 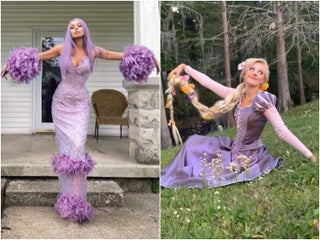 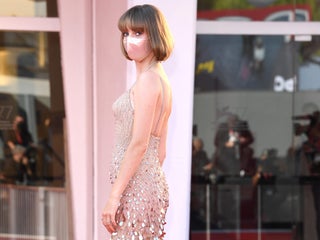 Few Met Gala looks are as iconic as the 55-pound couture cape dress that Rihanna wore in 2015 to the museum’s “China: Through the Looking Glass” event. But this week Rihanna revealed that she was so scared to walk the red carpet in her custom Guo Pei gown that she […] 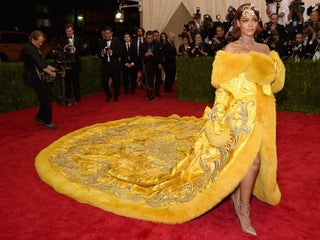 Camila Morrone and Leonardo DiCaprio attended the Oscars together on Sunday night. The 22-year-old wore a Carolina Herrera wedding dress that had been dyed pink to the event. The dropped-waist gown featured a corset bodice and a full skirt. DiCaprio and Morrone have reportedly been dating since 2017. Visit Insider’s […] The 2020 Oscars after-parties saw some of the most daring looks of the awards season. Barbara Palvin and Dylan Sprouse attended the Vanity Fair Oscars after-party in Beverly Hills, California, on Sunday. Palvin wore a see-through Versace gown with Swarovski crystal detailing and a thigh-high slit. Sprouse coordinated in a […] Many stars showed up to the British Academy of Film and Television Arts Awards, or BAFTAs, on Sunday wearing over-the-top outfits. Lily-Rose Depp attended the awards show as a presenter, and had one of the most memorable looks of the night. Depp wore a black, transparent catsuit designed by Chanel […] The 73rd British Academy Film Awards took place at London’s Royal Albert Hall on Sunday, February 2. The biggest names in the film industry, including Scarlett Johansson, Florence Pugh, and Rebel Wilson, walked the BAFTAs red carpet, and their outfits didn’t disappoint. Guests were instructed that for the 2020 awards […] The 2020 Grammys saw some political red-carpet outfits on Sunday. Singer Joy Villa, who wore a “Build the Wall” gown at the 2019 Grammys, arrived at this year’s red carpet in a gown emblazoned with “Trump 2020.” Actress Megan Pormer wore a dress showcasing her opinion on relations between the […] Ariana Grande changed into a second grey outfit at the 2020 Grammys red carpet shortly after arriving in a tulle ball gown. Her second look appears to be a two-piece outfit with a voluminous skirt and form-fitting, grey tank top with a bedazzled neckline. Grande’s stylist, Law Roach, told E! […] Lizzo wore a Versace gown with hand-embroidered Swarovski crystals on the red carpet at the 2020 Grammy Awards. Her dress took two months to make and was still being hand-beaded in Italy on Wednesday, stylist Marko Monroe told E! News. Monroe added that her dress paid homage to pop icons […] The 28 best-dressed celebrities at the 2020 Golden Globes

The 77th annual Golden Globes were held at the Beverly Hilton Hotel in Beverly Hills, California, on Sunday night. Celebrities arrived at the first major awards show of the season wearing head-turning gowns and classic suits. Some trends that were evident on the red carpet included wearing pink, lots of […]

The 25 best-dressed celebrity couples at the 2020 Golden Globes

There was no shortage of fashionable celebrity couples at the 2020 Golden Globes, which were held at the Beverly Hilton Hotel in Beverly Hills, California, on Sunday night. Many couples wore coordinating outfits, including Greta Gerwig and Noah Baumbach who matched in black-and-white looks. Other duos, like Rachel Bilson and […] All the looks celebrities wore to the 2020 Golden Globes

Awards show season kicked off with the 2020 Golden Globes,held at the Beverly Hilton Hotel in Beverly Hills, California, on Sunday night. Nominees and attendees arrived wearing some of the first major red-carpet looks of the year. Nominees such as Billy Porter, Ana de Armas, and Taylor Swift’s outfits were […] Reese Witherspoon and her daughter, Ava Phillippe, walked the red carpet together for the second season premiere of “Big Little Lies” on Wednesday. Witherspoon wore a sleeveless design by Elie Saab, while Phillippe was at her side in a chic black minidress. Witherspoon said “I never say never” when ET […] Several celebrities wore daring looks at this year’s Cannes Film Festival. Stars like Bella Hadid and Amber Heard made dramatic thigh-high slits one of the biggest trends on the red carpet. Other celebrities like Romee Strijd put unique spins on the sheer dress trend. Visit INSIDER’s homepage for more stories. […] Naomi Scott wore an eye-catching Brandon Maxwell dress to the Los Angeles premiere of “Aladdin” on Tuesday. The actress plays Princess Jasmine in the live-action remake of “Aladdin,” which opens on Friday. Mena Massoud, the actor who plays Aladdin, stepped in to make sure Scott’s dress looked picture-perfect. Visit INSIDER’s […] Billy Porter wore one of his boldest looks yet for the Peabody Awards in New York City on Saturday. He wore a flowing berry-coloured gown by Celestino Couture that featured pink embroidery and layers of ruffled tulle. Porter has become known for his head-turning red carpet looks, such as his […]