The Bridgewater Associates founder is summarizing his guide to better decision-making on Twitter. 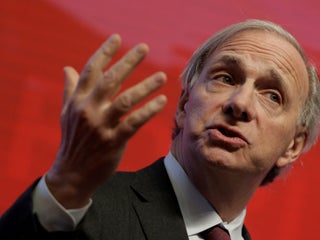 The hedge-fund founder Ray Dalio hosted a candid Reddit AMA on May 7, during which Redditors could ask him questions about anything, from his company’s work culture to the future of climate change. Users also asked him for life advice and book recommendations. The one thing Dalio wishes he had […] Billionaire Bridgewater founder Ray Dalio once received a memo from his employees saying he ‘belittled’ and ‘humiliated’ them, and it turned out to be great for everyone

Ray Dalio’s employees once sent him a memo stating that his behaviour made employees feel “belittled, oppressed, or otherwise bad.” Dalio was shocked about the impact of his leadership style, so he decided to be more open with his employees. The conflict helped perfect Dalio’s philosophy of radical truthfulness, inspire […] We scrolled through Ray Dalio’s new app — and it’s a whimsical look inside the mind of the successful, self-made billionaire

Ray Dalio, the founder of the hedge fund Bridgewater Associates, has launched a free app based on his best-selling 2017 book, “Principles.” The app is part career adviser, part life guru – with a dash of Bridgewater cheerleading. Besides having a copy of the book, the app comes with extra […] Ray Dalio is the founder of Bridgewater Associates, the largest hedge fund. In an interview with “60 Minutes,” he called for more deep-ocean exploration while voyaging in his personal submarine. Dalio likened the ocean’s dying coral to the American Dream, which he says is “lost.” Visit Business Insider’s homepage for […] Ray Dalio – founder of Bridgewater Associates, the world’s largest hedge fund – has released a 30-minute animated version of his bestseller “Principles,” in eight parts. The lessons are focused on recognising and adapting to challenges and positively using “radical transparency.” Dalio said he specifically wants new college graduates to […]