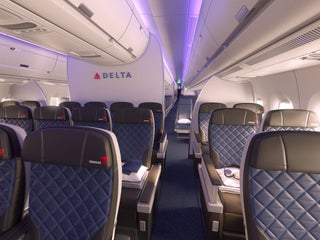 I compared economy and premium economy on British Airways one week apart, and for less than $200, I’d upgrade every time

On a recent trip from London to Toronto, I flew in both economy and premium economy on British Airways to see whether the upgrade was worth it. Ultimately, £125 ($US163) felt like a small price to pay for a second checked bag, a wider, more comfortable seat, extra leg room, […] These are the free amenities that Delta gives you on its long-haul flights in first class, business class, premium economy, and main cabin Singapore Airlines recently relaunched its nonstop service between New York and Singapore. The 10,000-mile flight can last as long as 19 hours; it’s the longest in the world. Singapore Airlines is using a fleet of brand-new Airbus A350-900ULR airliners to make the flight. The new fleet has 161 seats in […] Premium Economy is like flying used to be before the seats got smaller, or we got bigger, or both. It is also reminiscent of old-style Business class seats, when they were more armchair than tech pod, before the airlines applied engineering and design magic to make the front of the […]

What it’s like to travel in premium economy on Primera Air, the budget airline that flies from New York to London for $69

Booking with a budget airline is always a risk, but with a number of out-of-country weddings to attend this summer, when Nordic airline Primera Air announced its £99 transatlantic flight sale in March, the deal was too good for me to resist. The airline introduced transatlantic flights from London to […] REVIEW: Qantas premium economy is as good as business class on some other airlines

Here’s a look at the new Qantas premium economy seats

Qantas today unveiled its new premium economy seats on its Boeing Dreamliner 787 aircraft. CEO Alan Joyce say he’s proud of every cabin on the aircraft but believes the new Premium Economy is a quantum leap. “It’s a design that no other airline has access to,” he told a media […]