Apple’s Beats brand just unveiled a new pair of wireless headphones called Powerbeats, which serve as a less expensive alternative to the truly wireless Powerbeats Pro. The new headphones cost $US150 and will be available starting Wednesday. They should offer 15 hours of battery life and run on the same […] 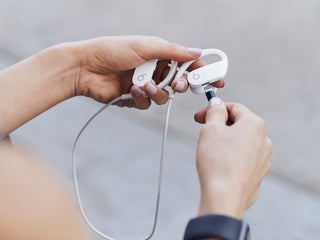 Every year, Oprah releases a list of her favourite things, including tech gadgets. This year’s list includes the Apple Watch Series 5 and Powerbeats Pro, plus some under-the-radar items. Here are the 10 tech gadgets Oprah recommends for 2019. Visit Business Insider’s homepage for more stories. It’s November, which means […] Apple’s AirPods Pro and Power Beats Pro both offer quality audio, a comfortable fit, and easy pairing with iOS devices for similar prices. But there are some differences to be aware of. The Powerbeats Pro, for example, offer longer battery life than Apple’s new AirPods, but don’t offer active noise […] I tried the new $250 wireless earbuds from Beats, and they’re officially the best AirPods alternative for iPhone users

Apple-owned Beats introduced the Powerbeats Pro wireless earbuds back in April. They’re Beats’ first truly wireless earbuds, and they have a revamped design and better battery life than past Powerbeats headphones. They do have some downsides: namely, a clunky charging case and a lack of long-term comfort. But I’ve been […] 24 hours with the new Powerbeats Pro: These may be the perfect wireless headphones The Powerbeats Pro wireless headphones are launching on May 10, with preorders starting on May 3. Beats unveiled the new headphones earlier this month. They run on the same H1 chip as Apple’s second-generation AirPods, meaning they share some of the same features. Visit Business Insider’s homepage for more stories. […] Apple just launched another pair of truly wireless earbuds. Here’s how they compare to the new AirPods.

Beats just unveiled the Powerbeats Pro, which are truly wireless headphones just like Apple’s AirPods. The debut comes after Apple released a new pair of AirPods in March that offer the option for wireless charging and “Hey Siri” support. Here’s a look at how the two new headphones compare. Coming […] Apple-owned Beats has introduced its first new product in two years: fully wireless earbuds called Powerbeats Pro. The buds are an update to Beats’ popular Powerbeats headphones, and have the same internal technology as AirPods 2. Powerbeats Pro cost $350 and will be available in May. Beats on Wednesday unveiled […]