A Wisconsin man kept his end of a pact made 28 years ago and split his $US22 million Powerball jackpot winnings with his friend. Thomas Cook and Joseph Feeney shook hands in 1992 promising to split winnings regardless of who won. Both men took home about 5.7 million each after […] 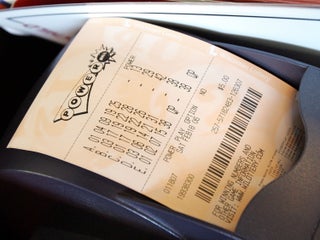 Thursday night’s Powerball jackpot could see one Australian instantly made $150 million richer. With plenty of stories abounding about how lottery winners quickly went on to lose it all, we spoke to a couple of financial planners about what you should actually do with that kind of money. From keeping […]

The $768.4 million Powerball jackpot has a single winner, who bought the ticket in Wisconsin

A winning ticket for the $US768.4 million Powerball jackpot has been bought in Wisconsin. Powerball said the ticket matched all six numbers and the Powerball. The white balls were 16, 20, 37, 44, 62, and the Powerball was 12. It’s the third-largest win in US history – after the $US1.6 […] Google released its annual “Year in Search” lists on Wednesday. One of the lists measured 2018’s most trending topics that started with the words “How to,” reflecting things Americans needed help with this year. Two of the most popular topics of the year involved how to vote in the midterm […] A Manhattan man won an October Powerball jackpot after playing the same numbers every week for 25 years, according to The New York Times. However, the rules of probability and the way lotteries like Powerball are set up mean that it doesn’t matter if you use the same numbers in […] The $US750 million Powerball jackpot is the fourth largest prize in US history. After no winners were declared on Saturday, a second drawing will be held Wednesday. Players are more likely to get killed by fireworks than win the prize, but that hasn’t stopped people from purchasing tickets. Business Insider […] Lottery players everywhere dream of snagging the winning lottery ticket for a multimillion-dollar jackpot. The current Powerball jackpot, for example, sits at a whopping $US625 million. But there’s a dark side to coming into a windfall of sudden wealth if you’re not careful. Here’s what it’s really like to win […] How to win the lottery, according to a Romanian-born mathematician who hacked the system, won 14 times, and retired on a remote tropical island

You might want to know how to win the lottery – especially as the Powerball jackpot jumps to a $US625 million payout. Stefan Mandel, a Romanian-Australian economist, developed a formula that’s allowed him to win the lottery 14 times. It’s a six-step process designed to hack the system. You’re four […] Publishers Clearing House became a household name thanks to its signature TV commercials featuring regular Americans receiving massive sweepstakes checks for millions of dollars from the company’s Prize Patrol. Founded in 1953, the company blazed a trail in the direct mail business, and after more than 60 years of existence, […] The winner of a $560 million lottery ticket can remain anonymous, scoring a big win for privacy

A New Hampshire woman who won the Powerball jackpot of $US560 million in January can remain anonymous, a judge ruled. The New Hampshire Lottery Commission wanted to dismiss her request to remain anonymous because of the state’s Right to Know Law. Jane Doe was worried that had her identity been […] The Mega Millions lottery reached its fourth-largest jackpot in history last week at $US450 million. The sole winner is 20-year-old Shane Missler, who announced his win on Facebook with three words: “Oh. My. God.” Missler is a Florida resident and is taking the lump sum of nearly $US282 million. A […] The Mega Millions jackpot has reached a record high of $US848 million. That’s life-changing cash. Just for fun, check out some of the over-the-top luxuries a winner, or winners, could afford. Life could change for one – or even a few – lucky people in a matter of moments. As […] The jackpot for Wednesday’s Powerball drawing is up to $US460 million. Though that’s a pretty big prize, working through the maths of how lotteries work suggests that buying a ticket is not a great investment. The low probability of winning and the risk of splitting the prize in a big, […] The Powerball and Mega Millions lottery jackpots are worth over $US1 billion combined. If you’re lucky enough to have the winning numbers, fight the urge to immediately tell everyone you know. It’s wise to consult a trusted financial planner and lawyer before claiming the prize. Over $US1 billion is up […] The Mega Millions and Powerball jackpots for this weekend’s drawings are both over $US300 million. If the historical relationship between prize sizes and ticket sales holds, there’s a pretty good chance no one will win the jackpot this weekend, but someone could get lucky. This is an interesting week for […] The color blue is the latest victim of the supply chain...