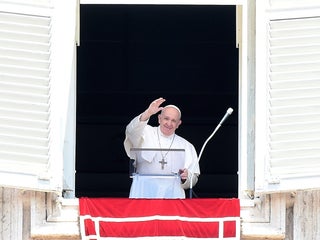 On Monday, El Paso, Texas, Bishop Mark J. Seitz became the first Catholic bishop to publicly take the knee in symbolic recognition of racial injustice and police brutality in America. Bishop Seitz led a gathering in silent prayer for 8 minutes and 46 seconds, the length of time that Minneapolis […] 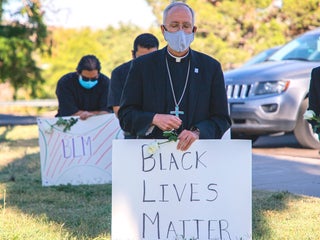 Pope Francis apologised in a New Year’s Day address for losing patience and smacking the hand of a woman who grabbed him. “I apologise for yesterday’s bad example,” he said. Videos of the incident showed the pope navigating a crowd when a woman reached out and grabbed his hand, yanking […]

Pope Francis compared anti-gay comments made by politicians to speeches made by Adolf Hitler. He made the comment while speaking to an international penal law association on Friday, the Associated Press reported. He said: “These are actions that are typical of Nazism, that with its persecution of Jews, gypsies, people […] Pope Francis told 230 hairdressers, hairstylists and beauticians on a pilgrimage to Rome on Monday to stop gossiping. He told the group to practice their profession “in a Christian style” and said gossip is “easily associated” with their field of work. He told them to think of their patron saint, […]

Pope Francis donated $500,000 to help migrants in Mexico headed for the US border

Pope Francis donated $US500,000 to support migrants in Mexico headed to the US border, according to an announcement from the Vatican. The announcement said the Pope made the donation to counter the worsening conditions migrants face when trying to enter the US, and hopes to help Mexican congregations who support […]

Pope Francis tweeted Saturday that the Virgin Mary was the first “influencer.” Twitter users immediately began poking fun at him, using their own memes and internet references. The tweet came shortly after Francis spoke at an evening vigil service in Panama City, in which he explained that being an “influencer” […]