On Saturday morning, Proud Boys chairman Enrique Tarrio posted photos taken at the White House on the social media platform Parler, saying that he accepted a “last minute invite to an undisclosed location.” The posts raised questions of whether the leader of the male-only, right-leaning organisation had a personal meeting […] 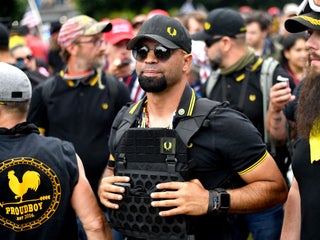 The 16 Countries With The Biggest Risk Of Violence And Unrest EL-ERIAN: ‘Populist Anger Could Return With A Vengeance’ To The US

[credit provider=”Bloomberg TV” url=”http://www.businessinsider.com.au/el-erian-pours-cold-water-on-todays-jobs-report-2012-2″] It’s no secret that Mohamed El-Erian, the CEO of PIMCO–the world’s biggest bond fund–is pretty down on the current crop of global leaders and the way they’ve handled financial and economic crises over the past several years.With attention focused on the upcoming presidential election in the […] Americans have grown a bit more critical over the past month of the methods used by Occupy Wall Street protesters; however, their overall view of the movement and position on its goals have not changed. The majority of Americans, 53%, say they neither support nor oppose the movement, while supporters […] This Is Why Occupy Wall Street’s Vision Is Unobtainable

Occupy Wall Street’s demands may be hazy but its organizational mantra is crystal clear. Time and again its members use the terms “decentralized” and “non-hierarchical” to describe their vision. Welcome To The Era Of Leaderlessness

[credit provider=”Yepoka Yeebo / Business Insider”] The tea party and the “Occupy Wall Street” movements evolved on different planets, even if members of both groups sport red-white-and-blue face paint, funny hats, and placards proclaiming their anger. Tea partyers tend to be older, antitax, and more Midwestern or Southern in origin. […] A Theoretical Look At Why Societies Become Extremely Unequal

[credit provider=”_PaulS_,Flickr” url=”http://www.flickr.com/photos/kapkap/6189131120/sizes/m/in/photostream/”] We are seeing the specter of instability in the growing protests of income inequality, economic distress of the middle class, and economic and political power of the very wealthy.There is Occupy Wall Street in the U.S., and similar protests ranging across the globe. In parts of Europe […] Ever had a desire to loose your teeth? Say the wrong thing to the wrong person at a European soccer match and you might get your wish. VIDEO: Pro-Gay Activist Dumps A Box Of Glitter All Over Newt Gingrich

Because of Newt Gingrich’s support for the banning of gay marriage, political activist Robert Erickson, AKA Nick Espinoza, approached the Gingrichs at a book signing, pulled out a cracker box full of glittery confetti, dumped it all over them and said: “Feel the rainbow! Stop the hate!”