According to a recent poll, 56% of white Republicans said they were either unsure or would not take a COVID-19 vaccine if it were available to them. 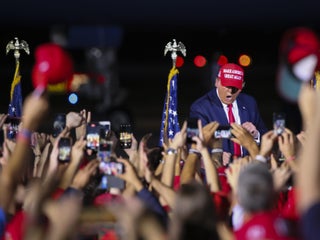 ‘I am not starting a new party’: In CPAC speech, Trump says he is committed to the GOP

"We're not starting new parties," Trump said on Sunday. "You know, they kept saying, 'He's going to start a brand new party.' That was fake news." 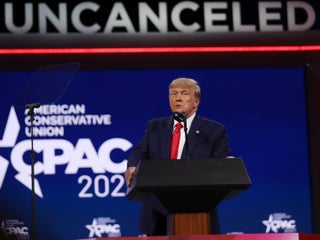 He's gone from tech to politics. How David Frum Went From Loyal Conservative To Excommunicated Dissident

"Dissent too much from party orthodoxy, and you find yourself outside the party altogether." Sonia Sotomayor: How Do You Know I’m Not A Conservative?

[credit provider=”via The Colbert Report” url=”http://www.colbertnation.com/the-colbert-report-videos/423505/february-04-2013/sonia-sotomayor”] A lot of Americans think the U.S. Supreme Court’s justices make their decisions based on their own political leanings.However, Justice Antonin Scalia flipped out in September at the notion that the court pays homage to political parties when handing down rulings. Italy Could Soon Be Governed By The ‘Bunga Bunga’ Movement

[credit provider=”AP”] When Italians start voting on 24–25 February 2013, they will have no less than 169 parties to choose from, perhaps a few more! One of the parties in the running is the Bunga Bunga Movement.Yesterday, the party logos, actually logos for electoral lists, numbering a grand total of 219, were […] Statistically, People Are Not Very Good At Making Voting Decisions

[credit provider=”statigr.am/kimbo_ks13″ url=”http://statigr.am/p/342773198670355943_21184438″] A study by three scientists in the American Political Science Review finds that voters are not competent at accurately evaluating incumbent performance and are easily swayed by rhetoric, unrelated circumstances and recent events.Gregory Huber, Seth Hill, and Gabriel Lenz constructed a 32-round game where players received payments […] [credit provider=”flickr/jurvetson” url=”http://www.flickr.com/photos/jurvetson/2816735522/”] Party platforms are worthless mounds of drivel that have no impact on what U.S. leaders of either party actually do.Here’s what we wrote on the occasion of the GOP’s platform being the hot topic of discussion among our media elites: CHARTS: Here’s The Real Reason Washington Can’t Get Anything Done

The biggest area of polarization in America right now is not race, class, or gender — it’s politics, according to a new monster report from the Pew Research centre. INFOGRAPHIC: How Politics Drive Our Spending

States may be divvied up by political leaning – Red vs. Blue – but online bill-pay site Billeo decided to see whether our differences in the polls extend to our shopping habits as well. In An Unusual Move, Political Operatives Are Giving Tours Of Their ‘War Rooms’

[credit provider=”FinancialTimesVideos | YouTube” url=”http://www.youtube.com/watch?v=n74y3etmxmU”] Today seems to be the day for “process” stories demonstrating how political parties are willing to fight hard.Over at ABC News, Jake Tapper posts a video of his “exclusive look inside the GOP war room.” The dogged campaign struggle between President Obama and Mitt Romney has descended to actual dog-based political attacks by both camps. A Short History Of The Pirate Party, Who Just Clobbered Merkel’s Allies In German Elections

[credit provider=”AP”] The Pirate Parties of Europe may still form a very small part of the political spectrum, but they are an extremely vocal section.Slowly but surely, they seem to be becoming the party to watch in European politics. The German party recently won 7.4 per cent of the votes in […] The GOP Has It Wrong: The Real Threat To American Morality Is What’s Happening In Corporate Board Rooms

Republicans have morality upside down. Santorum, Gingrich, and even Romney are barnstorming across the land condemning gay marriage, abortion, out-of-wedlock births, access to contraception, and the wall separating church and state. The EU Is Planning To Give Europe’s Far-Right Parties $382,000 In Subsidies

[credit provider=”Alina Zienowicz, Wikimedia Commons” url=”http://commons.wikimedia.org/wiki/File:2007_07_16_parlament_europejski_bruksela_26.JPG”] The European Parliament leadership has for the first time agreed to award subsidies to a pan-European coalition of 13 far-right parties, The New Statesman reports.The European Alliance of National Movements (EANM) will receive a subsidy of €289,266 ($382,375), drawn from EU-taxpayer money, from the […] This year, 2012, is the anniversary of the start of the infamous Mani Pulite corruption scandals and investigations.