‘Pokémon Sword and Shield’ are getting their first big expansion later this month, bringing new Pokémon and a brand-new area to explore

The first major expansion for “Pokémon Sword and “Shield” will be arriving on June 17. The expansion will be released in two parts, the first of which is called “The Isle of Armour.” The expansion will bring a new area to the Galar region as well as new trainers to […] 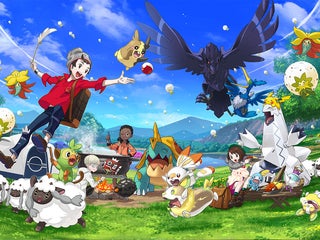 “Pokémon Sword” and “Pokémon Shield,” the latest Pokémon games on the Nintendo Switch, will receive a major expansion later this year. The “Pokémon Sword and Shield” Expansion Pass will add two explorable areas and more than 200 new and returning Pokémon to the games. The expansion pass is available for […] Here are the most bizarre and hilarious new Pokémon we spotted in ‘Pokémon Sword and Shield,’ the new games that bring the total number of characters to nearly 1,000

The recently released “Pokémon Sword” and “Pokémon Shield” have introduced more than 80 new collectible monsters to the video game series, bringing the total number of Pokémon to nearly 1,000. Pokémon take the place of animals in their world, but their designs are inspired by everything from plants and food […] Dozens of people who were playing “Pokémon Sword” and “Pokémon Shield” over the weekend took to social media to report that their Roku devices weren’t working correctly. Both Pokémon games are played on the Nintendo Switch, so it wasn’t immediately clear how the video game console could be causing issues […] “Pokémon Sword” and “Pokémon Shield,” the new Pokémon games for the Nintendo Switch, won’t have every Pokémon in the series so far. Pokémon producer Junichi Masuda said the decision was not easy, but the resources needed to bring roughly 1,000 Pokémon to the Switch were too demanding. Instead, the games […] Every new Pokémon in the newly released ‘Pokémon Sword and Shield’ that we already know about, from Alcremie to Mr. Rime

“Pokémon Sword” and “Pokémon Shield” were released on the Nintendo Switch on November 15. The games introduced dozens of new Pokémon from the Galar region, a new area in the Pokémon world. “Sword” and “Shield” will bring the total number of Pokémon in the series to more than 1,000 when […] Pokémon fans are accusing the developers of being ‘lazy’ for not including all 1,000-plus Pokémon in the new Nintendo Switch games

“Pokémon Sword and Shield” are the newest Pokémon games, and they’re coming to the Nintendo Switch on November 15th. “Sword and Shield” will introduce hundreds of new Pokémon, bringing the total number of Pokémon in the franchise to more than 1,000. However, players won’t be able to catch every single […] The new Pokémon games on the Nintendo Switch won’t let you ‘catch ’em all,’ and it’s left some fans heartbroken

“Pokémon Sword and Shield,” the next generation of Pokémon games coming to the Nintendo Switch, won’t have every Pokémon in the franchise so far. This is a first for the main Pokémon series. Prior games let players trade and transfer Pokémon between versions to maintain a full collection. Pokémon producer […] The Pokémon Company just announced a bunch of upcoming games and apps, including a new game called ‘Pokémon Sleep.’ Here’s everything else Pokémon fans have to look forward to.

The Pokémon Company held its annual press conference in Tokyo on May 29, announcing two new games and a pair of apps to help players further immerse themselves in the world of Pokémon. A sequel to “Detective Pikachu,” the 2016 game that inspired the movie, is coming to the Nintendo […] Everything we know about ‘Pokémon Sword and Shield,’ the newly released Pokémon games for Nintendo Switch Nintendo just debuted its new pair of Pokémon games coming to the Switch later this year: “Pokémon Sword” and “Pokémon Shield.” It also provided a preview of the grass, water, and fire-type Pokémon that players will be able to choose from: Grookey, Scorbunny, and Sobble. Nintendo on Wednesday unveiled its […]