Podcasts like Australian celebrity Pete Evans' are an increasingly important part of the misinformation and conspiracy theory media ecosystem. 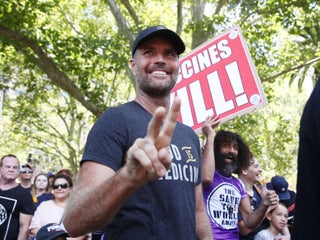 Facebook has removed the Facebook Page of one of Australia’s foremost theorists Pete Evans for sharing COVID-19 misinformation. Evans has repeatedly posted health misinformation and conspiracy theories, leading many companies to sever ties with the former celebrity chef. Evans’ Instagram account remains active, and he also has smaller presences on […]

Pete Evans has faced backlash for posting a neo-Nazi symbol on social media. Here are all the companies which have dumped him since.

Celebrity chef and high-profile conspiracy theorist Pete Evans has faced an enormous backlash after posting a cartoon on social media featuring a neo-Nazi symbol. Since then, a string of companies have either ended their relationships with him or signalled their intentions to do so. After first claiming he knew what […]

After publishing 15 books by Pete Evans, Pan Macmillan put out a statement distancing itself from the conspiracy theorist and celebrity chef after he published a cartoon featuring a neo-Nazi symbol on Sunday evening In it, the publisher claims that it is ‘finalising’ its relationships with Evans and ruled out […]

Pete Evans’ publisher has defended its decision to publish his latest cookbook, as the controversial celebrity chef continues to promote conspiracy theories

More than 7,000 people have signed a petition addressed to Pan Macmillan, calling on the publisher to stop publishing Pete Evans because of his promotion of conspiracy and anti-public health views. The publisher has confirmed their plans to publish Evans’ latest cookbook, saying the author has helped “hundreds of thousands” […]

An Australia mask-maker has withdrawn a offer to advertise with “Married At First Sight” star Natasha Spencer because she shared a COVID-19 conspiracy post from celebrity chef Pete Evans. Spencer took to Instagram to criticise the company’s founder for using obscenities when he called Evans “a chef, not a fucking […]

Not always recommended for children.

A blow to the wellness industry.