Most personality tests (like Myers-Briggs) are junk science and can make you cling to a label — instead, focus on making meaningful change 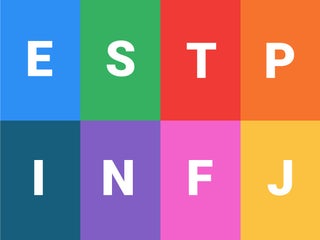 Extroverts have 4 consistent advantages over everyone else at work

An extrovert has a leg up over introverts at work, according to a new study. For example, extroverts are more skilled at schmoozing with coworkers. They also tend to experience positive emotions more often, which can protect against burnout. Other research suggests introverts and “ambiverts” can be just as successful […] The best job for you, according to your personality type

The Myers-Briggs test isn’t perfect, but your personality type could help guide you to a great career. If you’re an ESFP, you may make a good bartender. ISFJs may make great kindergarten teachers. Visit Business Insider’s homepage for more stories. When thinking about your career, it’s important to take your […] Narcissists have thicker, denser, more distinct eyebrows, according to a new study

Narcissists generally have a lack of empathy, a grandiose view of themselves, and a need for admiration. But they can be tricky to spot, as they are very charming if they want something from you. According to a new study, you might be able to pick them out by looking […] Some people have very high levels of empathy. But if they take on everyone else’s baggage all the time, it can lead to an “empathy burnout.” This is essentially like running out of fuel to care. To stop this, they need to learn to be discerning and build strong boundaries. […] A study in 2010 found that small talk was associated with lower life satisfaction. But a follow up study has found this actually isn’t the case. Small talk isn’t as important as deep, meaningful conversations – but it isn’t bad either. Lead researcher Matthias Mehl said it is more like […] Everyone has dark triad personality traits – those associated with narcissism, Machiavellianism, and psychopathy. But not everyone is a full blown narcissist or psychopath. In everyday life, we can use our dark triad characteristics to our advantage. In fact, it’s probably to your detriment if you don’t. Some people struggle […] Introverts and extroverts have different brain chemistry ways of functioning. Introverts often need to take time out in an “introvert hangover.” This is where they spend time alone and recharge after a lot of social stimulation. But this isn’t a negative experience. In fact, introverts spend this time being creative […] Some people have preconceptions about what it’s like to ADHD. You may imagine someone who is very loud and annoying. In reality, having ADHD is just a different way of functioning, and it can be a real asset. For example, people with ADHD are highly creative and can learn a […] Some people think introverts avoid social situations. This isn’t actually true; they just need more time to recharge after a lot of social stimulation. It’s because they have a low threshold for dopamine, so they are easily overwhelmed. In contrast, extroverts have a very high threshold so can keep going […] Narcissistic personality disorder is one diagnosis, but there are three distinct types of narcissists. People with the disorder are categorized based on how they act and treat others. Some experts say that identifying a person’s type of narcissism can make relationships with them possible, but others say it’s best to […] Robin Dreeke is an FBI agent and the co-author... VIDEO: A study has discovered a link between certain personality types and the frequency and quality of their sex lives. Here’s the difference between dog and cat owners

VIDEO: Scientific American collected these common traits that dog owners have in common. VIDEO: A new study has discovered a link between certain personality types and the frequency and quality of their sex lives.

The way you write l, t, i, and y reveals a lot about your personality

VIDEO: According to graphologist Kathi McKnight, your handwriting can communicate more than you may think. VIDEO: A study has discovered a link between certain personality types and the frequency and quality of their sex lives.

Bridgewater Associates, with $150 billion in... Here’s what your handwriting reveals about you

VIDEO: "Just from analysing your handwriting, experts can find over 5,000 personality traits," says master graphologist Kathi McKnight. Here's a brief overview of what some handwriting quirks can mean about you. Bosses with this personality type often manage the most people