The social media company is tapping into subscriber-only content for up to $9.99 a month as Super Follows launches for a test group in the US. 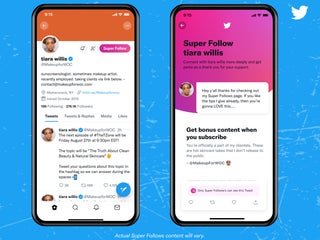 Media companies are embracing voice assistants, but worry they’re giving up too much control to Amazon and Google

Dear Readers, After a short hiatus, we’re back! Welcome to the first edition of BI’s new Advertising and Media Insider newsletter. We’ve replaced our daily digest with a weekly version that publishes every Wednesday and will go deeper into the big stories we’ve been following. We’ll play around with the […] As Medium melts down, another big tech hope for... The Sun says it has added 300,000 daily visitors since it took down its paywall The startup that calls itself the "iTunes of... From all the announcements from Apple's big developers' conference, to Amazon Dash. Blendle, the Dutch startup that allows users to...

It's all about micropayments -- and refunds. News UK: Our Paywalls Are Working. Here Are The Numbers To Prove It That number might seem low, but the tabloid's total paid-for sales are now up to more than 2.2 million. CHART OF THE DAY: The New York Times Paywall Subscription Growth Slows Down

Online media is a tough sell. [credit provider=””>Daniel Goodman / Business Insider”] In the two years since the New York Times slapped a paywall between casual readers and its coveted content, finding weak links in its armour has become something of a sport for webgoers. Unfortunately, one of the most popular workarounds is no longer, NYMag’s Joe […] [credit provider=”Associated Press”] Google agreed on Thursday to help boost online revenues for a group of Belgian newspaper publishers and authors, settling a six-year dispute over copyright which it hopes will be a model for resolving similar clashes around the world.Publishers have been trying to get Google to pay them […] Why USA Today Is Not ‘Comfortable’ Charging For Digital Access

In a time when prestigious brands like the New York Times are having trouble creating a paid subscription model that is sustainable, USA Today publisher and MarketWatch founder Larry Kramer, says his paper is not ready to charge its readers for online access. The New York Times announced today that it’s reducing the number of articles you can read for free before you hit its paywall. [credit provider=”Luigi Rosa via Flickr” url=”http://www.flickr.com/photos/lrosa/3385842874/”] BRATISLAVA, Slovakia (AP) — Slovenia is following Slovakia in a project for media to earn revenue by charging a single fee for access to their online sites.In May, all major Slovak newspapers and others went behind one common pay wall and offered unlimited access […] [credit provider=”AP”] The grey Lady may be in luck. Two reports out this morning from Citibank and UBS show an improving print advertising picture for newspapers, as retailers drive ad lineage growth.Channel checks by UBS’s John Janedis show December advertisements in The New York Times up some 10% as department […]