Bobby Ryan returned to home ice with the Ottawa Senators on Thursday night for the first time in 104 days. Ryan had left the team in November, taking a leave of absence to enter the NHL’s player assistance program to seek treatment for problems he had had with alcohol. In […] 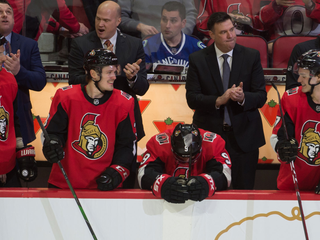 Seven Ottawa Senators players were secretly recorded in an Uber criticising the team’s penalty-killing and assistant coach Martin Raymond. The video, which was uploaded to the internet and eventually taken down, showed the players questioning the team’s defensive philosophies, practices, and Raymond’s coaching. The players released a statement apologizing for […] Kyle Turris gave the Ottawa Senators an early 1-0 lead over the Minnesota Wild with a shorthanded goal. But it was the pass from Clarke MacArthur that has hockey fans buzzing. With MacArthur leading a 2-on-1 with two other defenders chasing, he put the puck between his legs and flipped […] Kaspars Daugavins made a strange attempt during the Ottawa Senators’ shootout loss to the Boston Bruins. And if it wasn’t for a great save by Tuukka Rask it would have worked. The Ottawa Senators evened their series with the NY Rangers 2-2 last night with an overtime win at home. UPDATE: It looks like an outcry from NHL fans on Twitter prompted The Tennessean to change its headline.  It now reads: “Predators acquire Mike Fisher, Carrie Underwood’s husband.” With the Philadelphia Flyers already leading the Ottawa Senators 5-2 in the third period of last night’s game, Philly winger Claude Giroux took a run at Jesse Winchester and sparked a fight-filled third period.  First Jeff Carter and Winchester squared off, then Nick Foligno fought Giroux, and finally the entire […] These NHL Players Need To Be Traded Before The Deadline

[credit provider=”AP” url=”AP”] The New Jersey Devils have all but been eliminated from playoff contention and took the first step towards a fire-sale by trading captain Jamie Langenbrunner Friday morning. The Devils aren’t the only team that might be close to throwing in the towel on the 2010-2011 NHL season; the […] [credit provider=”New York Times” url=”http://www.nytimes.com/2010/12/10/sports/hockey/10islanders.html?_r=2&src=tptw”] A group of 1,100 Quebec hockey fans will make the trip across the United States border tonight to attend tomorrow evening’s New York Islanders game.They aren’t hoping to steal the Islanders. Rather, they want this to be a demonstration to Commissioner Gary Bettman about the […] Did An Ottawa Senators Player Flick His Own Blood At Opponents? [credit provider=”Ottawa Sun” url=”http://eedition.ottawasun.com/epaper/viewer.aspx”] A famous basketball player may be getting all the attention in the United States today, but there will be another controversial player returning to his former team tonight when Dany Heatley’s Sharks take on the Ottawa Senators.Heatley essentially forced his way out of Ottawa last summer, […]