Why pearls, black opal, and chocolate diamonds are so expensive

Pearls, black opal, and chocolate diamonds are highly sought after gems. Many factors determine their value, including colors and sizes. 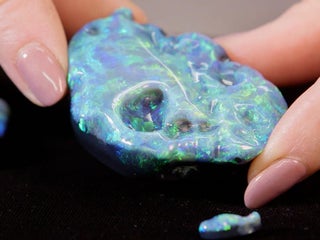 You can now sign up for a digital Opal card in NSW, adding another contactless payment method to the mix

You can now trial a digital Opal card in New South Wales, which lets you pay for trips on the Opal network using your smartphone or watch. Transport for New South Wales has opened up the trial to up to 10,000 adults. With the digital card, you get access to […]

Late on Sunday, the Commonwealth Bank announced a nice bonus: anyone using their credit card, debit card or mobile phone to pay for trains, ferries or the light rail around Sydney would get the same weekly travel rewards, travel caps and transfer discounts as Opal card users. In short, if […]

You’ll soon be able to use Samsung Pay on your phone to pay for public transport across New South Wales. Samsung announced Wednesday that commuters will simply tap their phone on any Opal terminal, which already accepts credit card payments, to board a train or ferry. You won’t even need […]

Public transport users in New South Wales have four weeks left to use any outstanding paper tickets, with transport minister Andrew Constance announcing today that the system will move to Opal cards only from August 1. Minister for Transport and Infrastructure Andrew Constance said Opal is now being used for […]

Have you ever tapped off your Opal card and had a sneaking feeling that the fare was too high? If you regularly travel in Sydney’s CBD, your suspicions could be well-founded. An investigation by Opal calculator app developer Kenneth Tsang has unearthed a so-called “CBD Increment” surcharge which sees commuters […]

Here’s how much Opal fares are going up by

Public transport in NSW is about to get a whole lot more expensive thanks to sweeping changes proposed by the Independent Pricing and Regulatory Tribunal (IPART). From July 1, there will likely be no more free weekly travel after eight journeys. In addition, fares will be going up 4.% each […]

The New South Wales government will trial credit and debit cards to tap on and off buses, trains and ferries in Sydney in early 2017. The trial will be based on London’s Oyster system, like the Opal card, which transport minister Andrew Constance announced yesterday can now be topped up […]

What happens when it's late, and you're in the suburbs?