As OU's Taylon Snow slid head-first into third base to beat a tag, her hand caught the bag, which forced one of her fingers out of its socket. 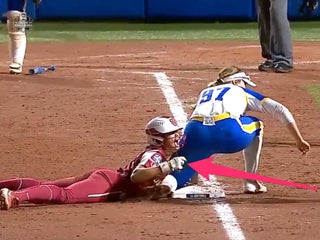 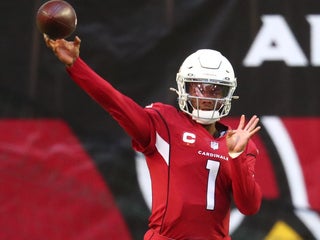 Joe Burrow and the LSU Tigers rolled over Oklahoma in the first half of the College Football Playoff semifinal on Saturday. In the first 30 minutes, Burrow threw for 403 yards and a whopping seven touchdowns, breaking several records en route to all but securing the Tigers’ spot in the […] The officials in the LSU-Oklahoma College Football Playoff matchup are under fire for a missed pass interference call late in the first quarter. Tigers cornerback Derek Stingley grabbed Sooners wide receiver Jadon Haselwood’s right shoulder and dragged him to the turf as he cut downfield for a Jalen Hurts pass. […] LSU got off to a dominant start against Oklahoma in the Peach Bowl on Saturday, jumping out to a quick 28-7 lead. In need of a spark, Oklahoma tried to jump-start their offence with a trick play, an altered flea-flicker from quarterback Jalen Hurts. The LSU defence didn’t bite on […] The College Football Playoff selection committee chose the LSU Tigers, Ohio State Buckeyes, Clemson Tigers, and Oklahoma Sooners to compete for a spot in this year’s national championship game. No. 1 LSU will take on No. 4 Oklahoma in the Chick-fil-A Peach Bowl at 4 p.m. on December 28. Four […] The College Football Playoff bracket is set and Oklahoma is in This season, Oklahoma quarterback Kyler Murray stunned the college football world with Heisman Trophy-calibre play that led the Sooners to the fourth spot in the College Football Playoff. Before he became a national sensation, however, Murray was drafted in the first round of the 2018 MLB Draft to play centerfield […] Less than a week removed from head coach Hue Jackson’s departure from the team, the Cleveland Browns took down Matt Ryan and the Atlanta Falcons, 28-16. Rookie quarterback Baker Mayfield threw for 216 yards and three touchdowns with no interceptions in Sunday’s win. Mayfield told reporters he “woke up feeling […] Trae Young will star in the second of Young Hollywood original docu-series “Rookie On The Rise,” the show that followed Utah Jazz sensation Donovan Mitchell through his first season in the NBA last year. In the trailer and throughout the series, Young lays out his ambitions to continue achieving unprecedented […] With their loss in the Big 12 Tournament to Oklahoma State, the Oklahoma Sooners are a bubble team heading into Selection Sunday. While the Sooners dropped off after a hot start to the season, they still have Trae Young on their roster – one of the most dynamic and compelling […]

College football’s final four is set as Clemson, Alabama, Oklahoma, and Georgia will compete for the championship. With just three games to go that truly matter, Alabama is a slight favourite to win it all, according to Nate Silver’s model at FiveThirtyEight.com, with a 30% chance to win it all. […] The one big mystery left in the playoff was answered as Alabama has been selected over Ohio State. Ohio State’s win in the Big Ten championship game was not enough to overcome their second loss, a 31-point debacle against Iowa. Clemson is the 1-seed and will play Alabama in the […] There were no surprises in the last College Football Playoff ranking before the playoff teams are announced. Alabama is the biggest loser as they are the only team in the top seven that does not still control its own destiny. Alabama needs Oklahoma or Wisconsin to lose to get in. […] Chaos is here as both No. 1 Alabama and No. 2 Miami lost with one week to go. There are at least six teams that still control their own destiny depending on who wins the conference championship games. Alabama does not appear to be one of the teams and now […] It’s Rivalry Week! The one week of the season where no matter the talent gap between teams, a dose of good ol’ fashioned hate can make a game competitive. Last week our college bets fell back down to Earth a bit, going 3-4 against the spread. But after a 12-2 […] Baker Mayfield will not start for the Sooners on Saturday after making obscene gestures at an opposing bench last week. Mayfield made the gesture after players from Kansas spurned his handshake before kickoff. Oklahoma head coach Lincoln Riley was emotional while announcing the punishment of the likely Heisman winner. Oklahoma […]