PHOTOS: Step into a sci-fi skyscraper with ultraviolet lasers and cleansing torpedoes

To get workers back into the office, companies will have to reassure them their workplace is safe. One employer is going full sci-fi. 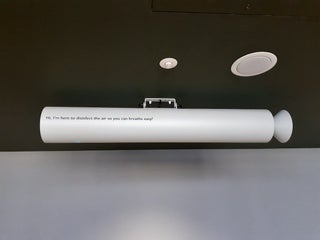 Google’s Mountain View, California headquarters opened a more than 31,000-square-foot area inspired by the area’s history of salt mining in 2019. The floor is a place for Googlers to hang out, eat, or workout. Google is known for its quirky offices, often inspired by the locations where they’re built. Visit […] 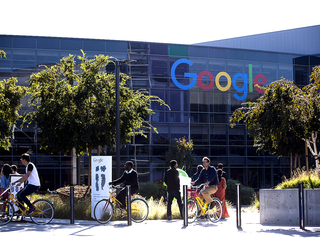 Shortform video app TikTok – which has grown 400 employees in the US – announced on Wednesday it has opened a new LA office. TikTok is owned by Chinese company ByteDance, which is currently seeking a new head for US operations. TikTok also revealed that it will open its own […] Inside Slack’s wild San Francisco headquarters, where each floor is designed to look like nature — from rocky deserts to soothing waterfalls

Slack’s San Francisco headquarters has a unique, nature-themed office. Each floor is inspired by a different natural landscape of the Pacific Crest Trail, along the west coast. Design firm Studio O+A embraced the theme, while also making the office functional. Slack employees in San Francisco can go from the desert, […] As Big Tech doubles down on Austin, startups are moving to its cooler neighbour. Take a look at how one startup is bringing Silicon Valley style to East Austin.

The Zebra, an insurance startup backed by Silicon Valley venture capital firm Accel, moved to trendy East Austin in October when it outgrew its downtown office space. High rents for office space in downtown Austin have pushed startups like The Zebra to look for larger spaces in up and coming […] 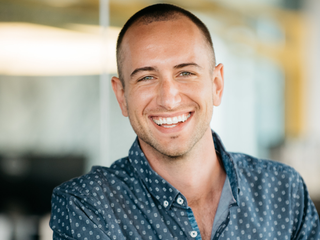 Take a look at an NYC office that calls itself the ‘future of law,’ where sharks hang from ceilings and meetings are held on repurposed bleachers

Axiom, an alternative legal services provider that calls itself the “future of law” for its innovative approach, is headquartered in New York City. The office has bright orange furniture, open floor plans, glass walls, and playful “shark” decorations to add to its inclusive company culture. Here’s Business Insider’s exclusive look […] Take a look inside the headquarters of Procore, the $3 billion tech startup in Southern California that has the Pacific Ocean right in its backyard

Carpinteria, California – a coastal town just 10 miles south of Santa Barbara – has brought in tourists for years, especially thanks to its claim as “the world’s safest beach.” But lately, Carpinteria (or as some of the locals call it, Carp) has been attracting people for a different reason: […] Take a look inside a real estate giant’s stunning Chicago headquarters, with a 16,000 square foot gym and panoramic views of the city

One of Chicago’s biggest office buildings recently added a ton of amenities, like a 16,000 square foot gym and meeting space, with panoramic views of the city. The Aon Center building now boasts the city’s largest amenity space, with a café, games, work space, and more, run by real estate […] FreshDirect beat Amazon to the grocery-delivery business by years. Take a look inside its sprawling warehouse.

FreshDirect, the online grocery service, operates a massive “food hive” in the South Bronx of New York City. This base incorporates both the company’s corporate headquarters and a bustling distribution center. I toured the facility, which features an intricate sorting system and highly sensitive temperature controls to keep the produce […] Twitch invited Business Insider for a first look at its new headquarters in San Francisco, California. The nine-floor office is a gamer’s paradise, with two six-person competitive gaming rooms, two live-streaming rooms, and a full arcade. “What we really wanted to do was bring Twitch to life,” Twitch’s Chief Marketing […] A look inside The Boston Consulting Group’s stunning New York office, which has an in-house cafe and workout rooms

When the New York-based staff of The Boston... INSIDE ATLASSIAN: We got an exclusive look at the tech company’s new Sydney office

The Atlassian story has been one success after another. In just the last year, the Australian-based tech business launched a global data centre in Europe, bought Trello — a productivity app with over 14 million users — to take on global giant Microsoft Office, hired a new CMO and a […]

Inside Verizon’s newly renovated New Jersey campus, which features an indoor taco truck, an exclusive hotel, and a mile-long track

Verizon has a large, seven-building campus in Basking Ridge, New Jersey. The space can accommodate a total of 6,000 employees. Business Insider swung by One Verizon Way and took a tour of its facilities. Verizon’s corporate headquarters may be based in New York City, but the telecom giant has another […] Inside Flatiron Health’s swanky, new NYC headquarters, where the cold brew coffee flows and the conference rooms give off a serious living room vibe

It’s been a big year for Flatiron Health. The New York-based cancer technology company in February got acquired by Roche in a $US1.9 billion deal. A few months later, the company moved into its new 108,000 square-foot office space at One Soho Square, a space that’s almost twice the size […] Inside Gusto’s brand-new San Francisco headquarters, where employees work on living room furniture and take off their shoes at the door

Gusto’s founding is a classic Silicon Valley tale. In 2011, Joshua Reeves and a few techie friends launched the company out of a house in Palo Alto, where the founders had access to top coding talent and proximity to the most powerful VC firms in America. That’s where the startup […] Inside Instagram’s brand-new NYC headquarters, which has a gelato station, a stocked bar, and backdrops for capturing the perfect Instagram photo

Stepping inside Instagram’s brand-new New York City headquarters is like walking into a perfectly curated Instagram feed. There’s the pastel-coloured juice and gelato bar where you can get a fruity beverage served in a coconut, complete with an umbrella. There’s a living wall that stretches up to the second story […] A look inside the New York office of Yelp, a billion-dollar company that offers its 4,000 employees around the world some incredible perks Salesforce moved into a new $1 billion skyscraper in San Francisco, and the offices are unlike anything we’ve seen

There’s no place like home. That is, unless you work in the newly opened Salesforce Tower in San Francisco, where employees at Salesforce’s new global headquarters may never want to leave. The building, the tallest office tower west of the Mississippi River, opened with a ribbon-cutting ceremony attended by the […] Inside GIPHY’s New York office, where lunch is catered every day, employees play arcade games, and the walls are alive with GIFs

GIPHY’s office in New York represents the company’s brand with colour and character. Employees enjoy catered lunch every day, a hanging garden, a coffee bar, and an arcade with virtual reality at GIPHY’s office. The conference rooms are named after popular GIF search terms – such as cats, dogs, mind […] Small business lender fintech Prospa has grown incredibly quickly in the 5 years since it begun. It started with $60 million funding in 2015, had round after round of capital raises, and had the eighth biggest capital raise of last year at $25 million, according to Right Click Capital. Prospa […]