A powerful snowstorm hit the Northeast and parts of the Mid-Atlantic Monday. Several areas in New York and New Jersey received more than a foot of snow. Flights have been cancelled at multiple airports across the region. Visit Insider’s homepage for more stories. The first snowstorm of 2021 hit the […] 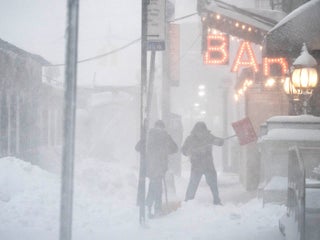 More than 4,500 canceled flights are causing chaos at airports

By Wednesday morning, the latest nor’easter had resulted in more than 4,500 canceled flights through Thursday. Airports in New York, New Jersey, and Philadelphia have been the hardest hit. American,Republic,JetBlue, and Southwest Airlines have canceled more than 400 flights each. One day after the official start of spring, the fourth […] ‘Pretty much every one on the plane threw up’: Pilot reports horrifying descent during nor’easter storm

Powerful storms throughout the Northeast on Friday have led to thousands of delayed and canceled flights. A report from a pilot who landed at Washington Dulles International Airport near Washington, DC, on Friday morning described a horrifying descent that led numerous passengers to vomit. “Very bumpy on descent,” the pilot […] The nor’easter storm known as Riley is undergoing a rapid intensification process called”bombogenesis.” This describes the process in which a storm quickly gets stronger if its central surface pressure drops by at least 24 millibars in 24 hours and qualifies it as a bomb cyclone. “Bomb cyclone” is a real […] Winter Storm Riley is hammering the East Coast with rain, sleet, and intense winds on Friday. The nor’easter is undergoing the rapid intensification process known as “bombogenesis,” a term meteorologists use to describe storms that become so-called bomb cyclones. This isn’t uncommon for nor’easters, but this one is expected to […] On Friday morning, a powerful nor’easter began barreling through the United States East Coast. The National Weather Service has warned that the storm is a “life and death situation” for those living on the coast. Winds are expected to reach speeds up to 50 mph. The storm – which may […] An intense nor’easter storm is expected to form Thursday night into Friday. Heavy winds and coastal flooding are expected in New York and Massachusetts, with potentially record-setting flooding possible in Boston and Nantucket. Some coastal regions have already issued evacuation orders. It may feel like spring in much of the […] Yet another nor’easter is hitting Boston, New York, and New England on Tuesday. Winter Storm Skylar is a blizzard, bringing a lot of snow and powerful wind gusts to Massachusetts. This is the third nor’easter in less than two weeks. Winter doesn’t officially end until March 21 – and the […] Early Thursday morning, a powerful winter storm hit New York City, bringing heavy snow and fast winds. The Nor’easter is expected to threaten the area with close-to-zero temperatures until Sunday, when it will make its way to the Canadian Maritimes, sitting over Nova Scotia and New Brunswick. Meteorologists say that […] Bomb cyclone, explosive bombogenesis, and polar vortex are real meteorological terms. But the weather phenomena they describe aren’t as uncommon as the words might suggest – there are probably 40-50 storms in the northern hemisphere that qualify as bombs every year. The cold air brought by the polar vortex is […] Snowfall rates were picking up for the storm hitting the Northeast on Wednesday. The National Weather Service said there may be “thundersnow,” a rare meteorological phenomenon in which a storm involving thunder and lightning also drops snow. Not long after noon ET, it happened. That’s rare because the storms that […] Wet, heavy snow is in the forecast for the entire Northeast on Wednesday. Areas of nine states, from Pennsylvania to Maine, are under a winter storm warning. In New York, forecasters are predicting as much as a foot of snow in some spots. Another big winter storm is coming to […]

It's not looking like the first day of spring... VIDEO: A nor'easter is likely to bring snow to the Northeast on March 20-21 as Spring officially begins. A blizzard is bearing down on the Northeast, and getting around town is about to get a lot trickier. Highways are being closed, flights cancelled, mass transit delayed. Here’s what’s happening in the air and on the ground: New York In New York City, express service on subway lines has […] A Nor’Easter Could Foil Your Thanksgiving Travel Plans

A nor’easter is swirling together and it could hit the east coast just in time for Thanksgiving, Quartz reports. The storm looks like it will stretch from New England down to the Carolinas, bringing snow, wind, cold and rain along with it. Quartz’s report, which cites the National Weather Service, […] [credit provider=”REUTERS/Brian Snyder” url=”http://www.reuters.com/news/pictures/slideshow?articleId=USRTR3DIIP#a=5″] The photo above of a pedestrian in Boston battling wind and snow from the major winter storm that rolled through the northeast last Friday was taken by Thomas Reuters’ senior photographer Brian Snyder.