Nick Kyrgios continued his trolling of Novak Djokovic by mocking his trademark celebration, then lost in straight sets

Nick Kyrgios mocked Novak Djokovic’s trademark celebration on Sunday before saying he doesn’t like the Serb “at all.” After winning a match, Djokovic throws his arms to the crowd while they cheer. “We’re just having some fun,” Kyrgios said. “I don’t like him at all, so it’s fun.” Visit Insider’s […] 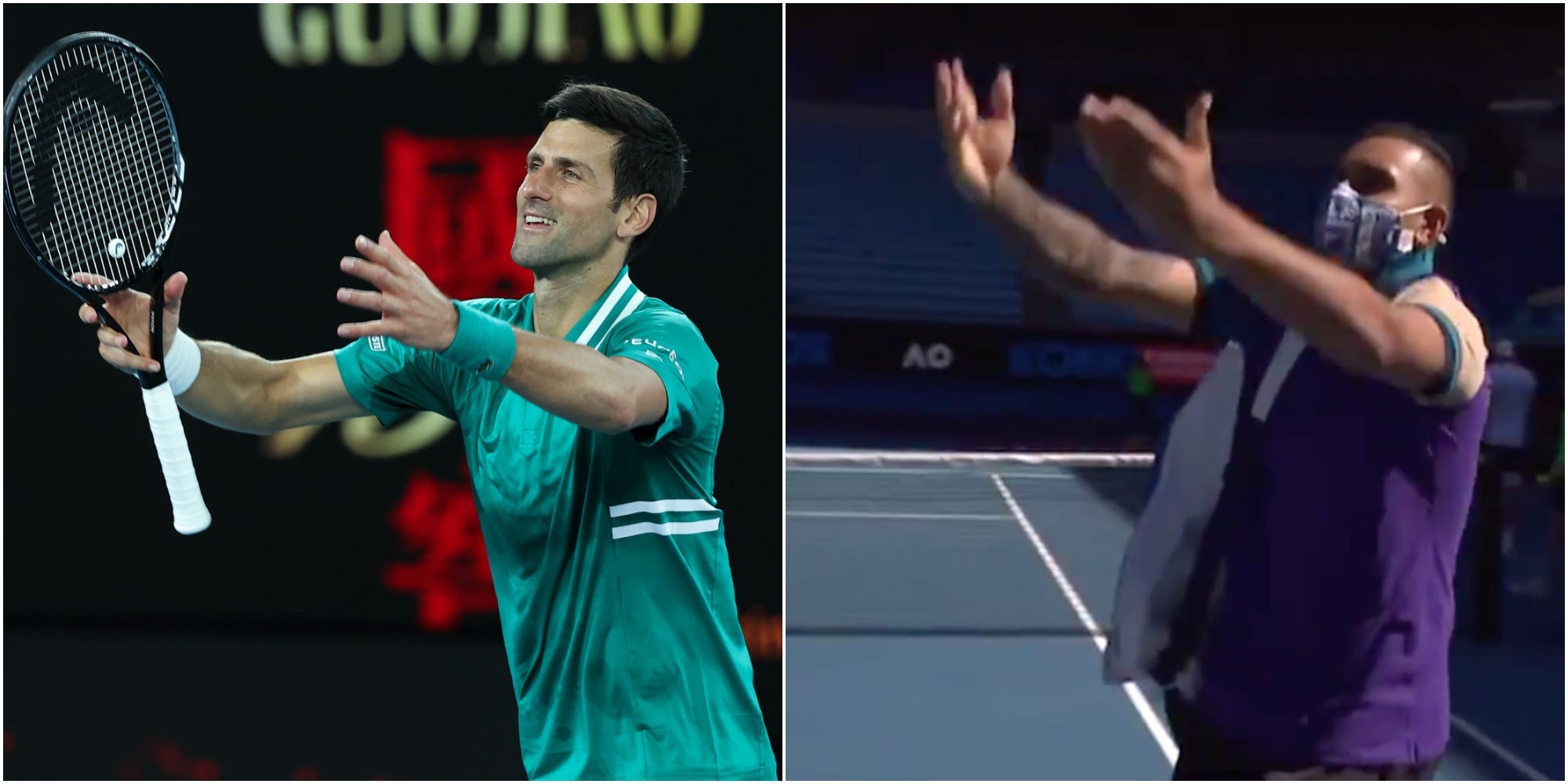 Nick Kyrgios cost himself a shot at Australian Open glory with a silly trick shot. Winning two sets to one against Dominic Thiem, Kyrgios attempted a through-the-legs shot which failed. It gave Thiem a chance to break Kyrgios’ serve, and Thiem went on to win the fourth and fifth sets. […] 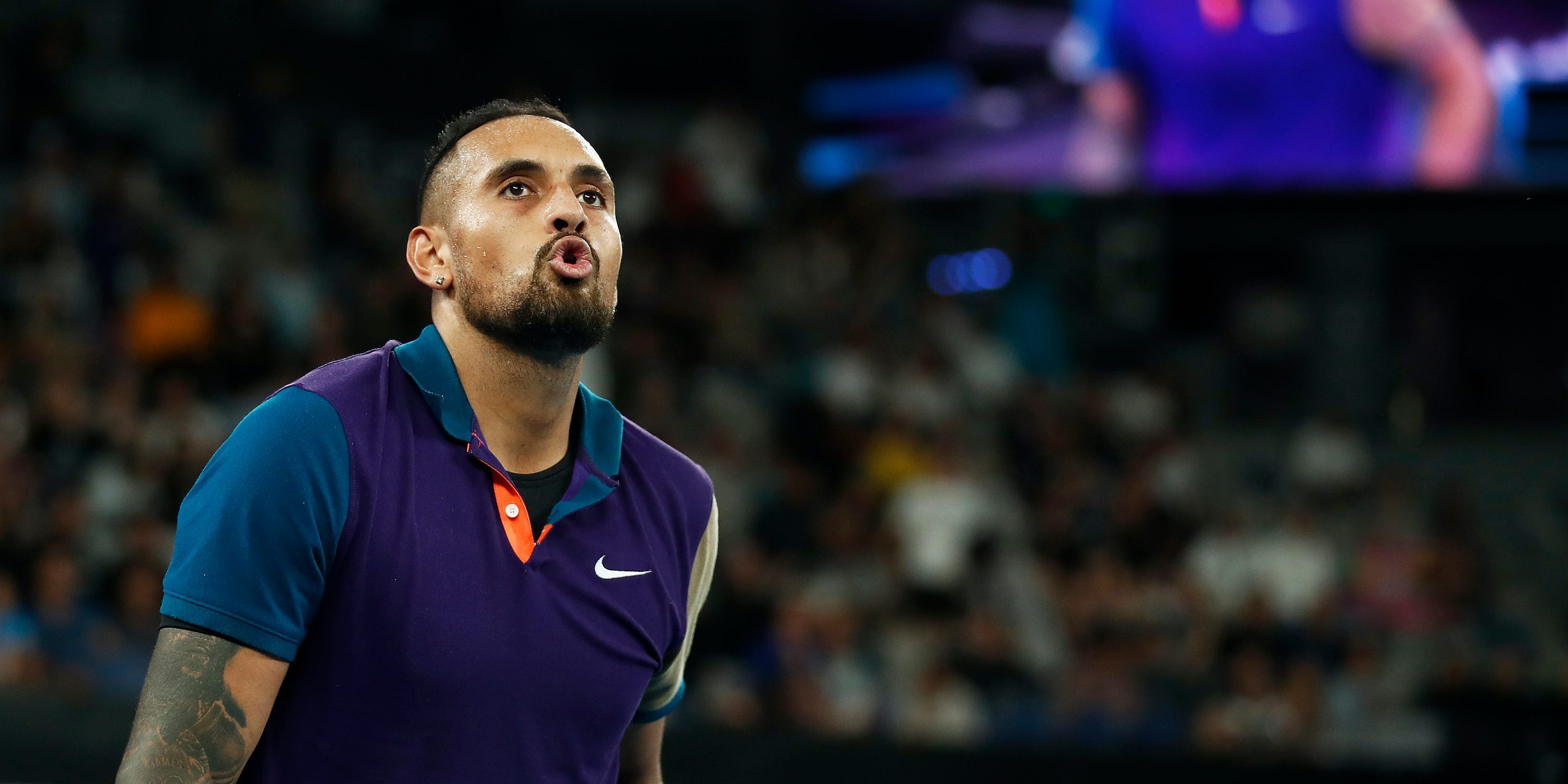 Nick Kyrgios hit out at Novak Djokovic after his victory in the first round of the Australian Open, calling him “strange.” He also criticised the Serb’s behaviour during the pandemic and said he isn’t “even close” to Roger Federer in terms of talent. Last week, Djokovic told reporters that he […] 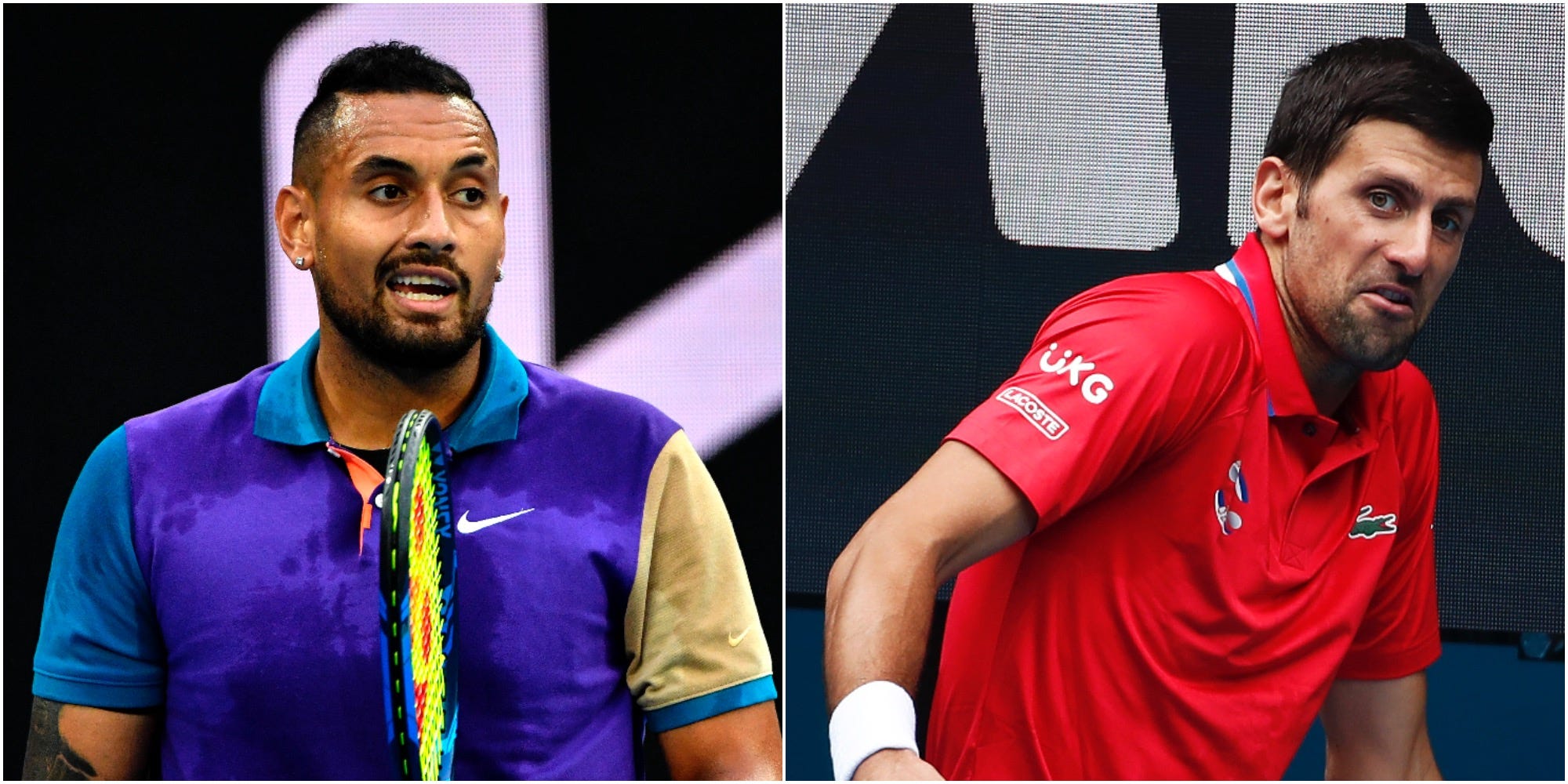 Nick Kyrgios smashed his racket and threw it into the stands as he crashed out of an Australian Open warm-up event on Friday. The Australian was also warned for bad language by the umpire as he was beaten in straight sets by Borna Coric. “There’s a massive question mark for […] 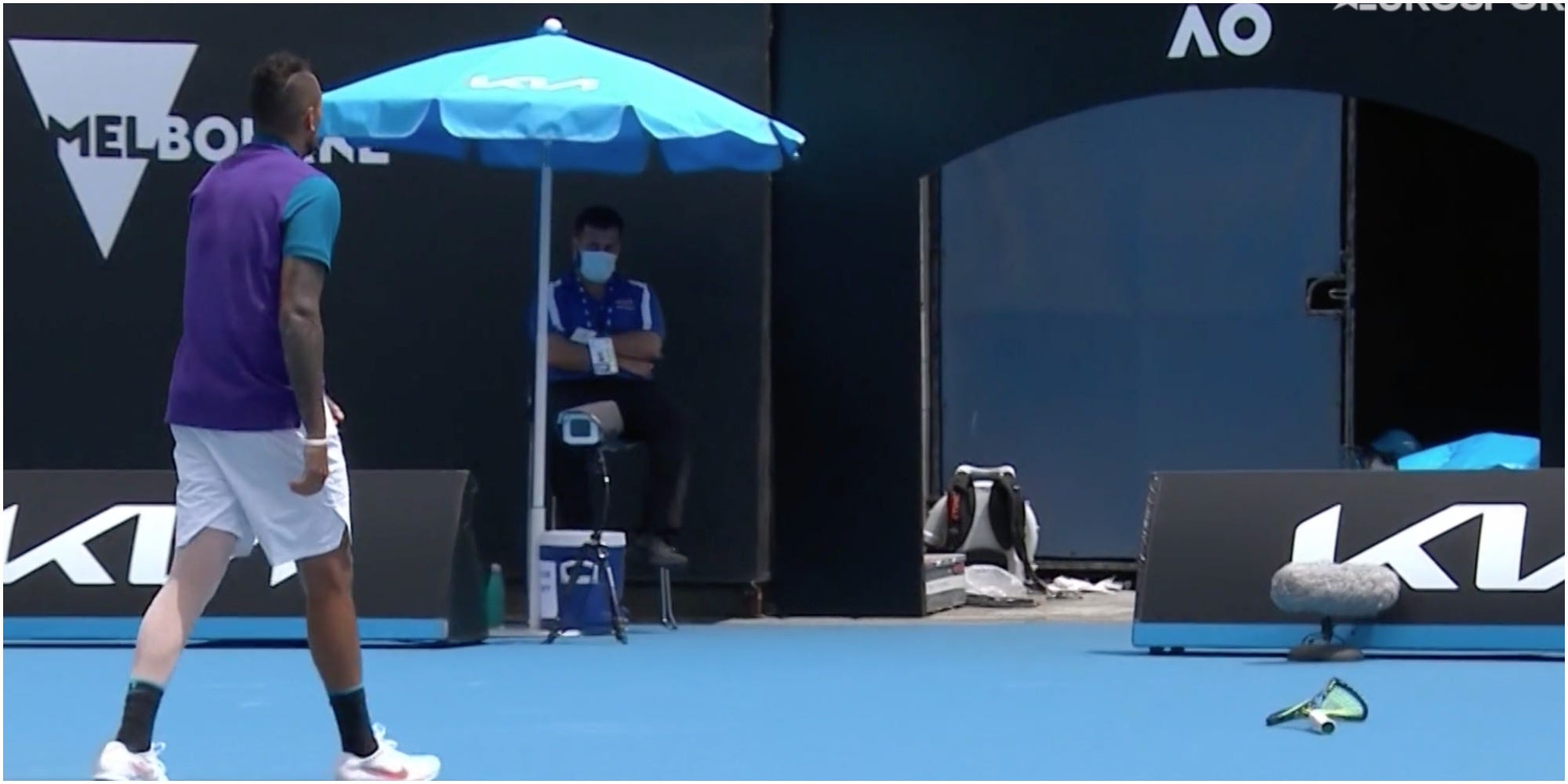 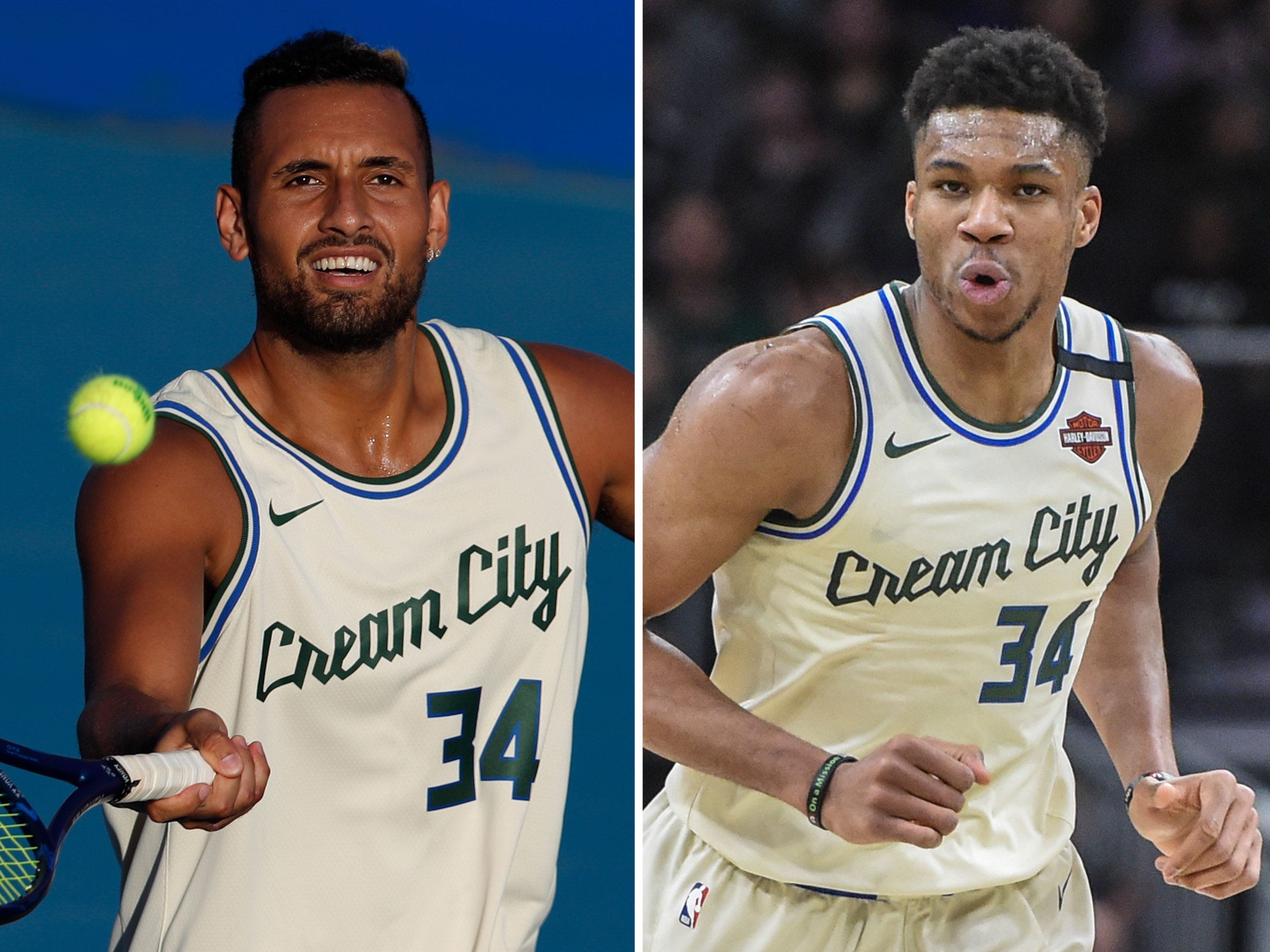 Nick Kyrgios walked off court and refused to keep playing, then called the umpire a ‘peanut’ and a ‘smart-arse,’ in his first match in almost a year

Nick Kyrgios left the court and halted play for a few minutes in his first tennis match in months. He also called the umpire a “peanut” and a “smart-arse.” The Australian was unhappy with being called for a time violation on his serve in the second set. Visit Insider’s homepage […] 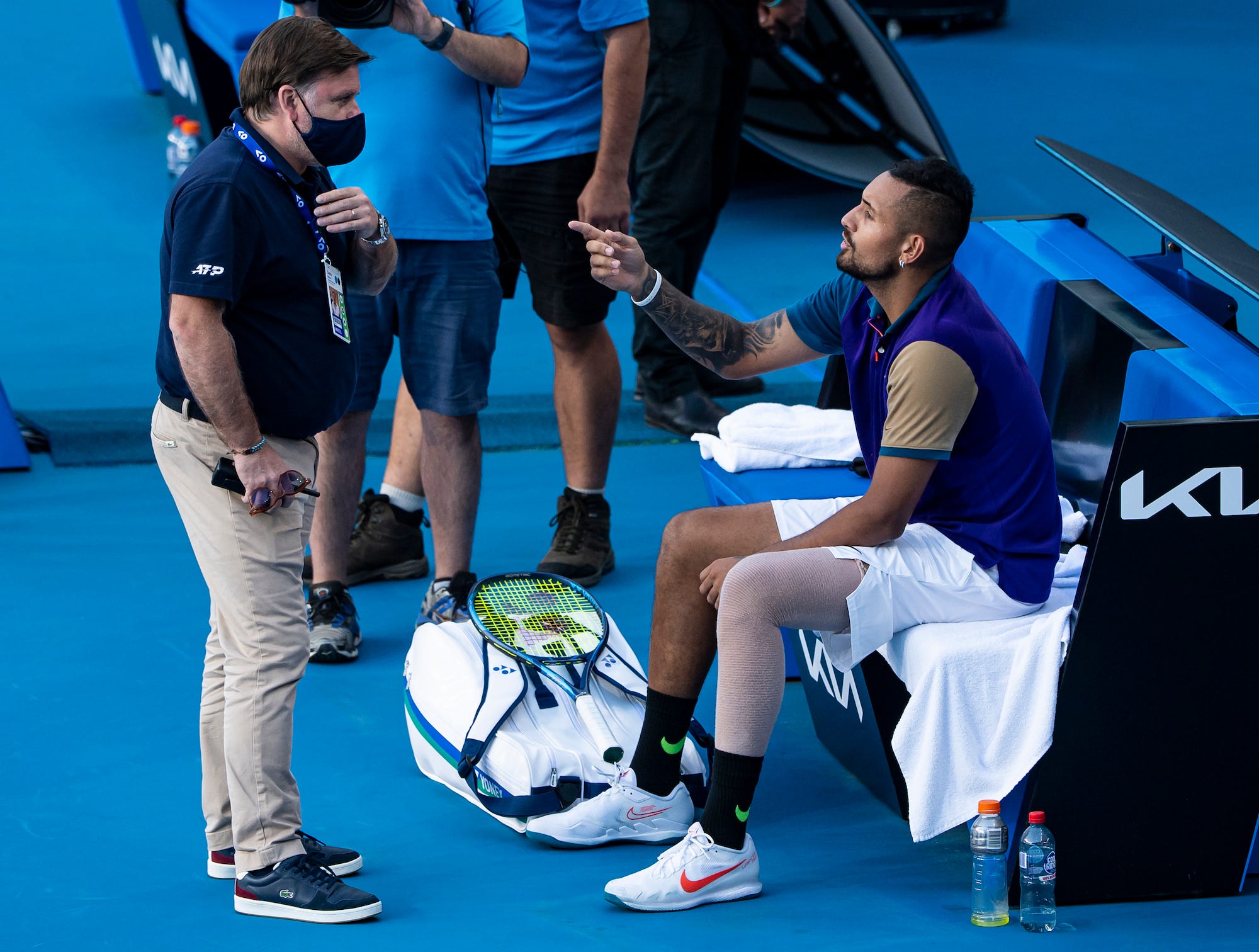 Nick Kyrgios says he didn’t miss tennis all that much during his year-long absence from the sport. Kyrgios took a break during the coronavirus pandemic but is set to resume action this month. He told Sky Sports he was able to funnel his competitiveness into video games. Visit Insider’s homepage […] 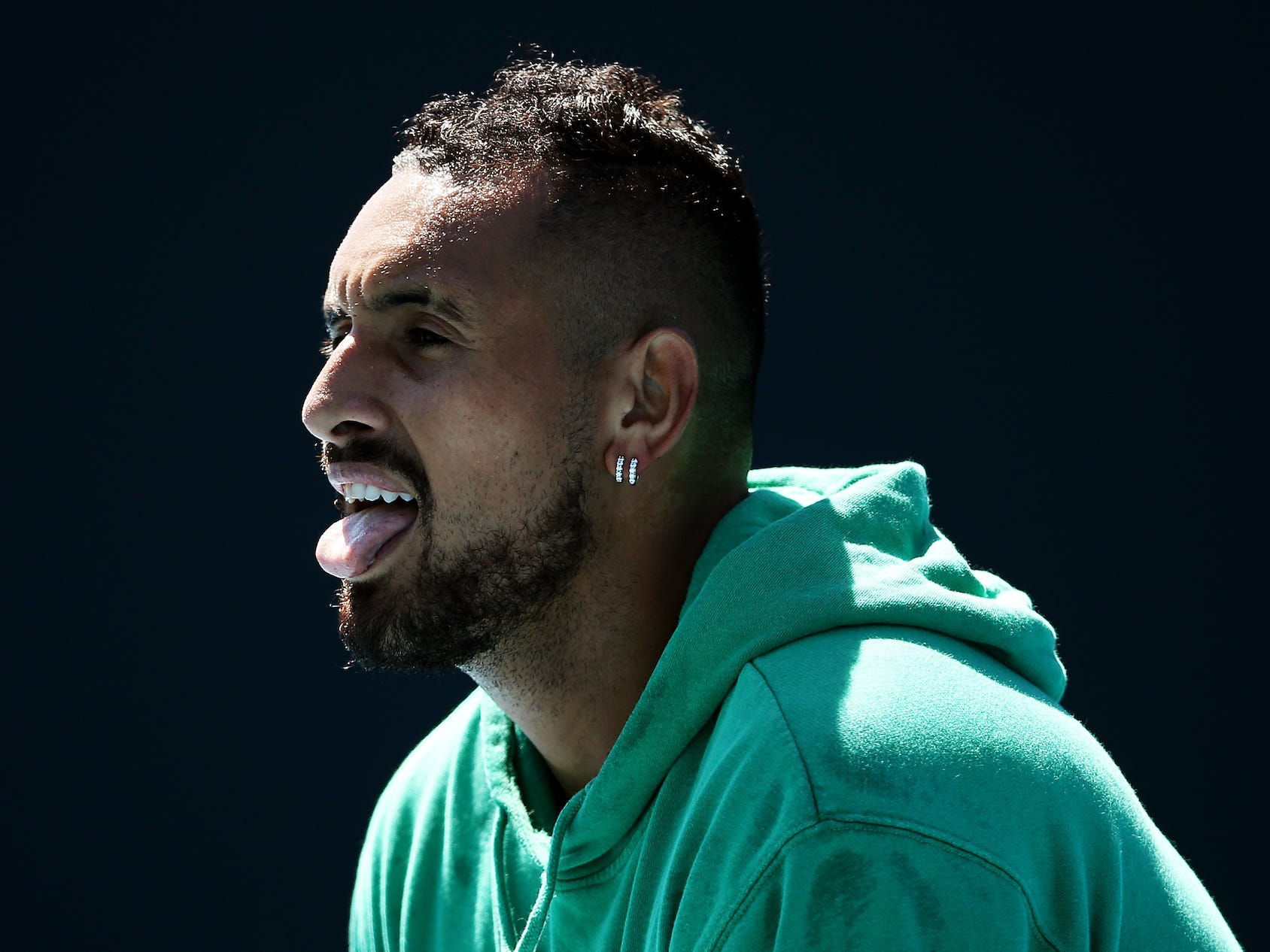 Novak Djokovic tested positive for the novel coronavirus after hosting a tennis exhibition tournament and partying in Belgrade. On Twitter, Australian tennis pro Nick Kyrgios said he’s never done anything as “irresponsible” or “stupid” as Djokovic’s actions. Kyrgios and many in the tennis world were critical of the tournament going […] 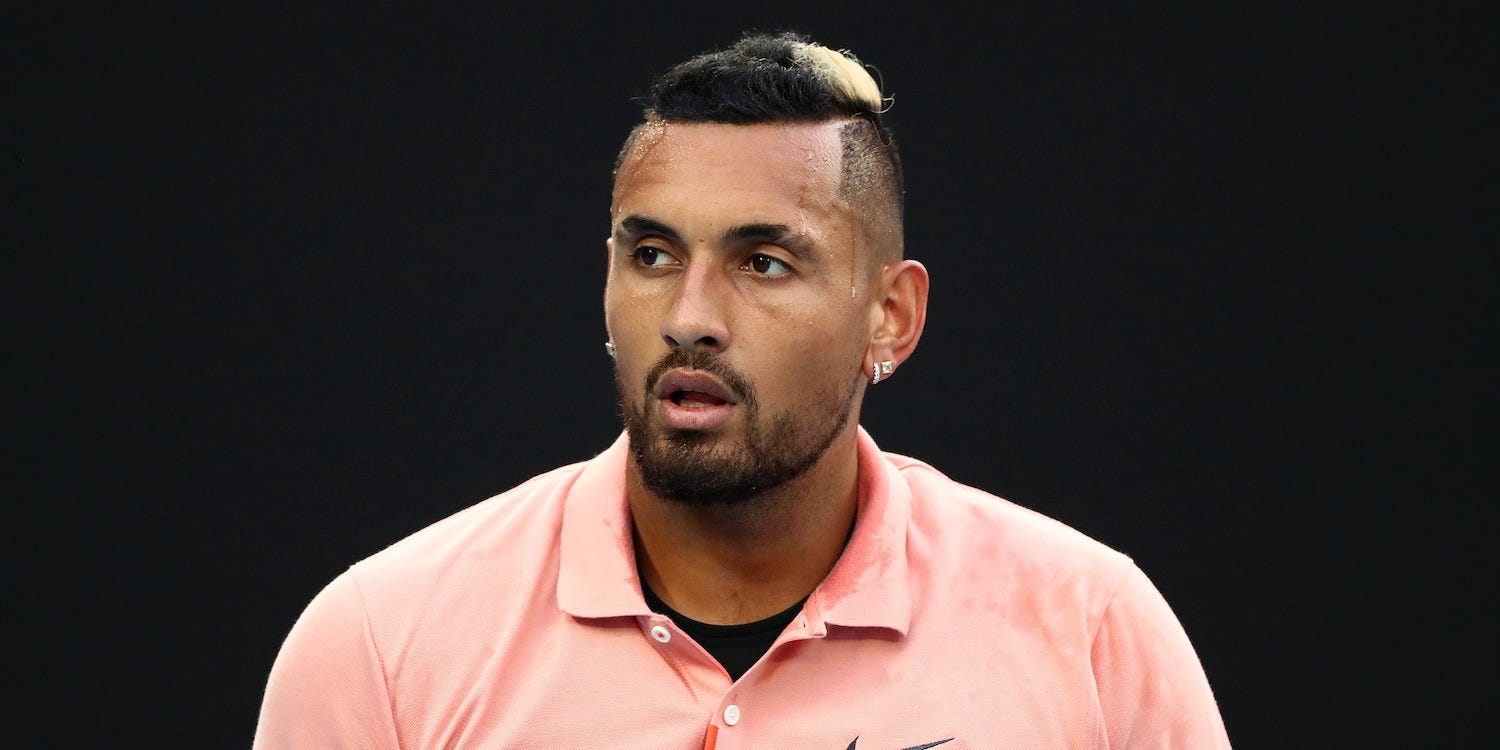 Nick Kyrgios has called out Rafael Nadal to air their beef on Instagram live. The two have been engaged in verbal warfare since their match at the 2019 Mexican Open, after which Kyrgios called Nadal “super salty” in defeat. “Rafa lets do Instagram live together. I am down with it,” […] 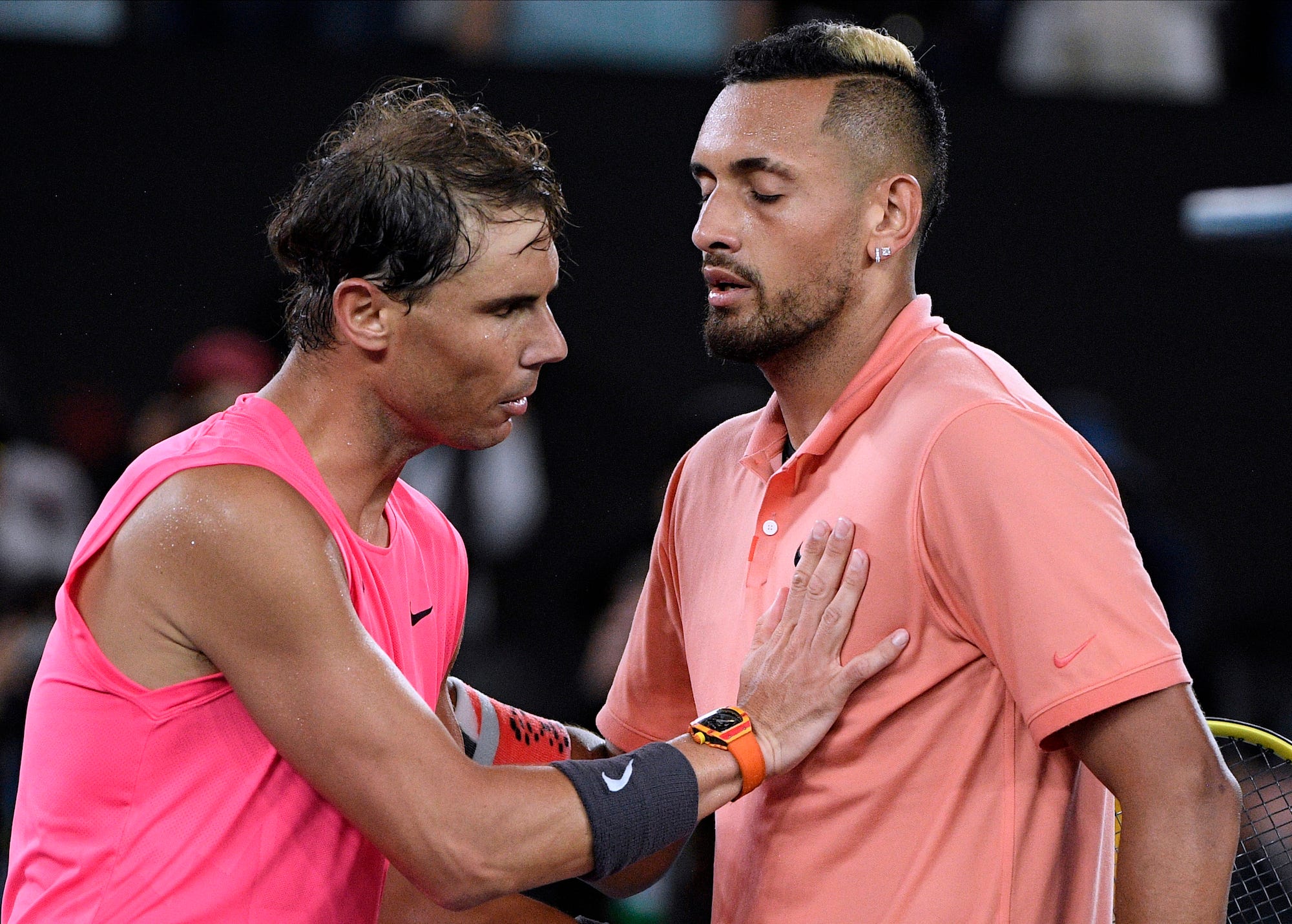 Nick Kyrgios has slammed Dominic Thiem for saying lower ranked tennis players don’t deserve financial help because of their “unprofessional” attitudes. Tennis’ major governing bodies outlined plans earlier this month to set up a fund to help lower ranked players who have been financially damaged by the coronavirus pandemic, according […] 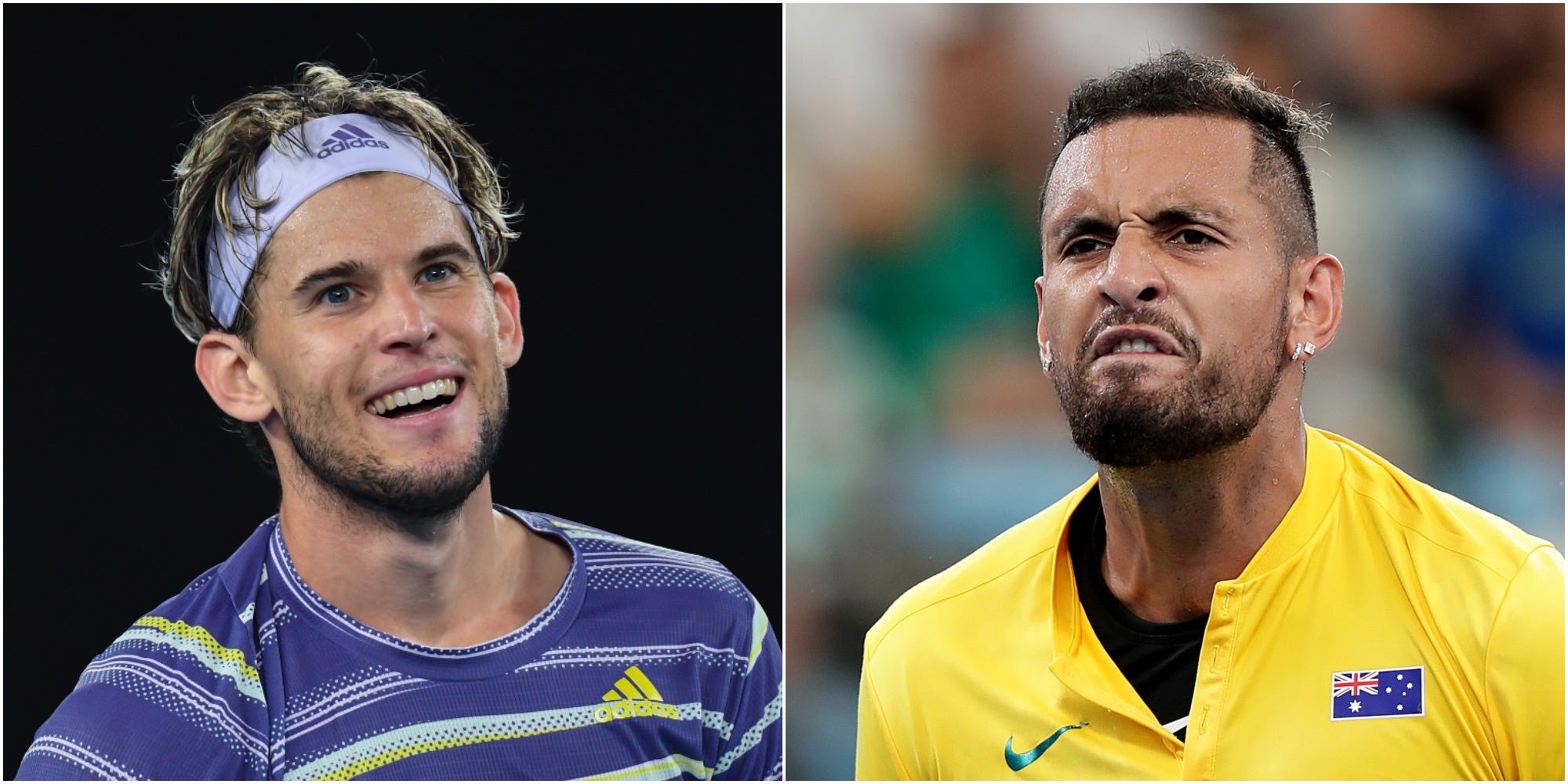 Nick Kyrgios won the longest match of his career, then said he was thinking about ‘getting some food or something’

Nick Kyrgios and Gilles Simon both mocked Rafael Nadal’s service routine after each received time violations during their encounter at the Australian Open. Kyrgios pretended to sweep back his hair and pick at his shorts after being penalised, prompting the crowd, and chair umpire Jaume Campistol, to laugh. Simon followed […]
News Jan. 22, 2020, 2:49 AM

On Tuesday, Nick Kyrgios produced an outrageous between-the-legs lob in his Australian Open first-round victory over Lorenzo Sonego. He then took to Twitter to mock Alexander Zverev, continuing their off-court spat. Zverev told reporters, as per Reuters, earlier in the tournament that Kyrgios won’t win The Open because there are […]
News Jan. 9, 2020, 11:25 PM

Nick Kyrgios says he’ll drink red wine after knocking Britain out of the ATP Cup, and it’s not the first time he’s gone boozing during a tournament

Nick Kyrgios says he will definitely be drinking red wine after helping Australia through a “stressful” tie against Great Britain in the ATP Cup quarterfinals. Kyrgios and Alex De Minaur beat Jamie Murray and Joe Salisbury by way of a thrilling 18-16 third set tie-break victory in Sydney. “That was […]
News Jan. 3, 2020, 3:46 AM

Tennis star Nick Kyrgios says he will donate “$US200 (US$140) per ace” this summer to help the victims of Australia’s bush fire crisis. The southeast of Australia has been engulfed in flames since October, leaving at least eight people dead and destroying hundreds of homes. “I’m kicking off the support […]
News Oct. 12, 2019, 8:00 PM

Tennis bad boy Nick Kyrgios is always in the headlines – whether for the right reasons or not. Since turning pro in 2012, the Australian has provided tennis fans with some of the sports most exciting and controversial moments of recent years. Business Insider has listed the best, and the […]
News Sep. 24, 2019, 1:21 AM

Nick Kyrgios lost to Roger Federer at the Laver Cup over the weekend and said he was distracted by a “hot chick” in the crowd. Cameras caught Kyrgios telling his team he would “marry her right now.” Kyrgios, 24, eventually exited the tournament with an injury, continuing his roller-coaster ride […]
News Aug. 28, 2019, 8:43 PM

Stefanos Tsitsipas called the umpire a ‘weirdo’ in humiliating US Open loss, one month after Nick Kyrgios said he was a bad influence on the young player

Stefanos Tsitsipas called the chair umpire a “weirdo” during his humiliating US Open first round loss Tuesday. Tsitsipas was beaten three sets to one by the unseeded Russian player Andrey Rublev. The abuse of the umpire and the opening round exit arrives one month after he partnered Nick Kyrgios in […]
News Aug. 15, 2019, 9:51 PM

Nick Kyrgios described umpire Fergus Murphy as “the worst in the game” and smashed two rackets during his second-round exit at the Cincinnati Masters. The Australian also took aim at Rafael Nadal after being called for time violation, calling out the Spaniard for his notoriously slow service routine. Kyrgios has […]
Next Page »