Tom Brady blew the game for the Tampa Bay Buccaneers on Thursday, losing to Nick Foles and the Chicago Bears 20-19 in dramatic fashion. After the game, Brady jogged off of the field before shaking Foles’ hand. It was the second time in his career he had snubbed Foles on […] 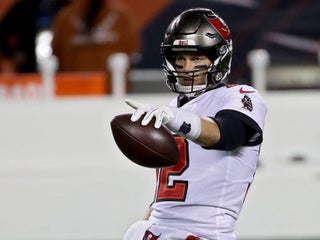 ‘That’s a cheap shot’: Tom Brady wasn’t happy after being trolled by Peyton Manning saying he’d bring out Nick Foles to be his caddy ahead of ‘The Match’

Tom Brady and Peyton Manning paired up with Tiger Woods and Phil Mickelson on Sunday to play in a charity golf game. As the players waited out the rain to start their round, Manning trolled Brady, joking that he’d almost brought out Nick Foles to caddie for him through the […] 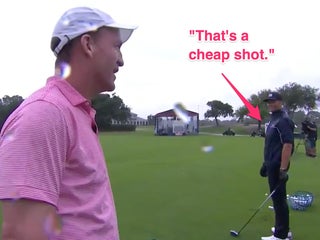 A slew of quarterback injuries has changed the landscape of the NFL just two weeks into the season. The Saints, Steelers, Jets, and Jaguars are all attempting to weather the storm without their starter, relying on backups to hold the fort. Below we break down the outlook of each team […] Week 1 of the NFL season features a full slate of games this Sunday. For daily fantasy players, the difference between winning and losing the day comes down to finding the best value plays at every position. This week, we like Nick Foles, Matt Breida, DeSean Jackson, and more to […] Nick Foles is leaving the Philadelphia Eagles to become the starting quarterback for the Jacksonville Jaguars. In Philadelphia, Foles served as backup for Carson Wentz, stepping in after his injury in 2017 to lead the Eagles to their first Super Bowl win in franchise history. While Foles’ talent is that […] The 2019 NFL offseason started with some big moves. The Raiders brought in wide receiver Antonio Brown and appeared ready to add even more talent. The Steelers have watched as two of the most talented players in the league left for greener pastures. The 2019 NFL offseason is well under […] NFL free agency has begun and several big signings have already been made. The top NFL free agents this year are overwhelmingly defensive players, with only a few big-name offensive players. Only six players were given the franchise tag by their teams, meaning several talented players will hit the open […] The Philadelphia Eagles once again find themselves in the midst of a miraculous playoff run thanks to backup quarterback Nick Foles. Foles’ winning ways leave the Eagles with a difficult decision in the coming offseason, depending on how badly they want to keep him with the franchise. While it looks […] Philadelphia Eagles backup quarterback Nick Foles headed to the locker room early Sunday afternoon after sustaining a chest injury during the Eagles’ first drive of the fourth quarter. With a playoff game against the Chicago Bears looming and starting quarterback Carson Wentz likely out for the remainder of the season […] Nick Foles once again took over for the Philadelphia Eagles and led them to an impressive, 30-27, win over the Los Angeles Rams. The Eagles won despite coming into the game as 13.5-point underdogs, making it their biggest upset victory since 1985. The win kept the Eagles playoff hopes alive […]

Nick Foles is likely to start for the Philadelphia Eagles after it was revealed that Carson Wentz has a stress fracture in his back. Foles’ contract has numerous incentives based on statistical accomplishments, playing time, and wins. While it’s too late for Foles to hit some of the incentives, he […]

In Super Bowl LII, the Philadelphia Eagles pulled off a brilliant trick play called the “Philly Special” that would immediately go down in Philadelphia sports history. With the Eagles offence struggling in the first game of the 2018 season, head coach Doug Pederson called on a strikingly similar play again […] Philadelphia Eagles quarterback Nick Foles gave a touching speech after being named the MVP of last year’s Super Bowl. Foles, who took over as a backup for the injured Eagles quarterback Carson Wentz, reminded the audience that failure was a part of life. Daily struggles are opportunities for character growth, […] The incredible life and career of Eagles quarterback and Super Bowl MVP Nick Foles, who broke Drew Brees’ high school passing record and plans to become a pastor after the NFL

The Eagles won the Super Bowl, and quarterback Nick Foles has become a hero for Philadelphia. Foles is originally from Austin, Texas, and has had a winding football career filled with ups and downs. He saw his now-wife on his first day at Arizona State, and their daughter, Lily James, […] The Philadelphia Eagles beat the New England Patriots 41-33 on Sunday night to win their first Super Bowl in franchise history. The game was won due in large part to the effort of quarterback Nick Foles, who was named Super Bowl MVP after the game. While speaking after the game, […]

Philadelphia Eagles quarterback Nick Foles played a pivotal role in defeating Tom Brady and the New England Patriots in Super Bowl LII on Sunday. After he threw for 373 yards and three touchdowns, he was named the Superbowl’s MVP. Foles has had an up-and-down career – after getting benched in […]