Sunday was a brutal day of NFL injuries. Saquon Barkley, Christian McCaffrey, Nick Bosa, and more NFL superstars were forced out of action due to injuries. According to ESPN’s Adam Schefter, the Giants fear Barkley may have torn his ACL, with more tests coming on Monday to determine the extent […] 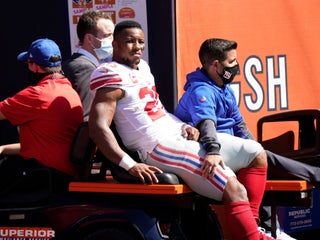 Baltimore Ravens tight end Mark Andrews pulled off a touchdown celebration weeks in the making on Sunday against the San Francisco 49ers. After scoring the Ravens’ first touchdown of the day, Andrews planted a flag in the end zone alongside his teammates. The move was a callback to a celebration […] Nick Bosa trolled Baker Mayfield while tearing through the Cleveland Browns offensive line on Monday night. After taking down Mayfield in the backfield, Bosa celebrated by pretending to wave a flag through the air and planting it in the ground. The move was a bit of revenge on Mayfield for […] Nick Bosa was drafted by the San Francisco 49ers with the second pick in the NFL draft. His social-media use and political beliefs have drawn criticism in the buildup to the draft, as he has tweeted support for President Donald Trump and liked right-wing social-media posts. Bosa said he deleted […] The 2019 NFL draft is set for April 25. Until then, teams will prepare to make their picks, and sportswriters will make their predictions through mock drafts. We analysed nine mock drafts to get a sense of how the first round might play out. The 32 NFL teams are surely […] Ohio State University has announced that star defensive end Nick Bosa plans to withdraw from the school to concentrate on rehabbing his injury and preparing for the NFL Draft. Bosa suffered an abdominal injury in September and was expected to miss most or all of the regular season. Bosa is […]