KFC announced on July 16 it would test chicken nuggets made with 3D bioprinting technology in Russia this fall. The chain partnered with 3D Bioprinting Solutions to create a chicken nugget that will mimic the taste and appearance of its original nuggets at a fraction of the environmental cost. The […] 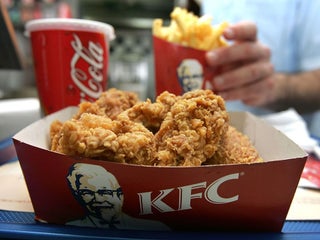 Silicon Valley startups backed by celebrities like Bill Gates are experimenting with the gene-editing technology Crispr to make lab-grown chicken, pork, and beef. Lab-grown meat, also called cultured or clean meat, is real meat brewed up using animal cells. So far, only prototypes exist. The idea is to move away […] Silicon Valley startup New Age Meats made history in September by letting journalists taste the first cell-based pork sausage made in a lab. Making meat without slaughter has been the primary objective of several companies since Dutch scientist Mark Post made the first “lab-grown” hamburger in 2013. This week, the […] Silicon Valley startup New Age Meats made history on Monday by letting journalists taste the first cultured pork sausage made in a lab. Making meat without slaughter has been the primary objective of several companies since Dutch scientist Mark Post made the first “lab-grown” hamburger in 2013. Here’s how the […] Some startups aiming to create real meat from animal cells are abandoning the term “clean meat.” In a meeting following a conference on alternatives to traditional meat, CEOs and representatives from those companies decided the term “clean” comes with too much baggage. The startups are also working to create an […] The founder of a top Silicon Valley startup got interrupted during a board meeting when he showed a slide of 5 new female hires, and it offers a lesson to other companies

Heidi Roizen, a partner at Silicon Valley venture-capital firm DFJ, had to stop a board meeting with cultured-meat startup Memphis Meats when the founder showed a slide of five recent hires, all of whom were women. That kind of commitment to inclusion is rare in Silicon Valley. At Memphis Meats, […] Tasty alternatives to meat aren’t enough for these startups, which are working on burgers, fried chicken, and sushi that verges on the real thing – all without the usual environmental waste or ethical concerns. While some companies pursue creative plant-based recipes for burgers that “bleed,” others are coaxing animal cells […] There’s a growing battle between fake meat startups and Big Meat, and neither side is backing down

In February 2018, the US Cattlemen’s Association (USCA) filed a petition to the USDA arguing that lab-grown and plant-based meat startups should not be able to call their products “meat,” since they do not come from slaughtered animals. The startups say they are not backing down. While lab-grown meat products […] Tyson Foods announced on Monday that it has invested in Memphis Meats, a startup that makes cultured meat. Past investors have included Bill Gates, Richard Branson, and the food and agricultural giant Cargill. Proponents of plant-based and lab-grown meat say that they are environmentally -friendly alternatives to traditional meat. The […] These 7 futuristic trends are changing food

Silicon Valley prides itself on efficiency and... Some of the world's richest people think that...