Melania Trump sent a strong fashion sign with her wardrobe choices during her departure from Washington, DC. She got on the plane in an all-black ensemble, but disembarked in Palm Springs wearing a colourful, quirky Gucci dress. It’s a look! Visit Insider’s homepage for more stories. People love reading into […] 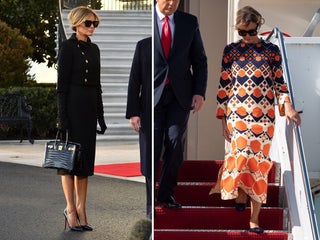 Melania Trump arrived in Florida wearing a $3,700 orange dress after leaving the White House in an all-black look 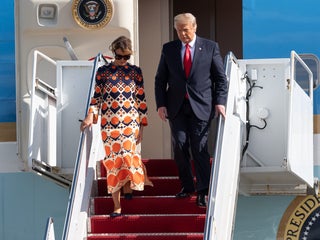 As protesters took to the streets in India, Melania Trump attended a ‘happiness’ class in Delhi

First Lady Melania Trump attended a “happiness” class in New Delhi, India, on Tuesday. The class is meant to teach children mindfulness, creativity, and well-being. During her visit, President Donald Trump sat down with Indian Prime Minister Narendra Modi to negotiate trade and military deals. Meanwhile, India is caught in […] 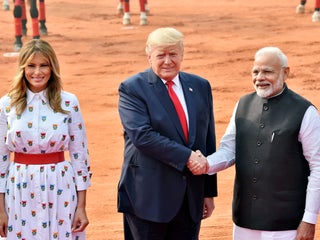 Melania Trump received the “2020 Woman of Distinction Award” from Palm Beach Atlantic University on Wednesday. In her acceptance speech, the First Lady urged “healthy online behaviour,” while her husband, President Donald Trump, was on Twitter, attacking Mike Bloomberg and threatening to sue “everyone all over the place.” People flocked […] 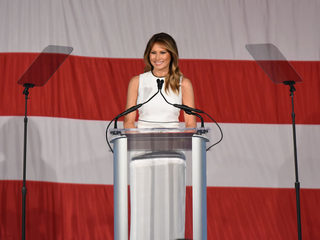 Melania Trump wore a bespoke Dolce and Gabbana dress for her visit with the British royal family on Monday. She paired the dress with a matching wide-brimmed hat by Hervé Pierre. Her look was similar to that of Meghan Markle’s for the Royal Ascot in June 2018, as well as […] Melania Trump’s press secretary criticised “The View” for discussing a conspiracy theory that the first lady has a body double. The unsubstantiated conspiracy theory about Trump has recurred for years. It returned when she wore sunglasses on a recent visit to Alabama. “That one does not look like her. Sorry,” […]

A photo of the first family’s visit to Alabama is reigniting a conspiracy about a Melania Trump body double, but other photos from the visit tell a different story

A conspiracy theory that Melania Trump has a body double has reemerged after her trip to Alabama with husband President Donald Trump. People online are theorizing that the woman next to the president is not his wife. In some photos, she can clearly be seen without her sunglasses on, and […]

Melania Trump wore sensible boots on her surprise trip to visit troops in Iraq, but people still won’t lay off her

Melania Trump wore a pair of yellow Timberland boots for a surprise visit with US troops at the Al Asad Air Base in Iraq on Wednesday. Some people have criticised her practical footwear choice, calling her “out of touch.” Timberland boots have gained iconic status in the hip-hop and fashion […]

Melania Trump discussed her most difficult issue as First Lady of the United States in a Fox News interview Wednesday. She said it was “opportunists” who use her name to “advance themselves,” pointing to comedians, journalists, and other media figures. Trump also said she isn’t afraid to tell her husband […]

Melania Trump spent $US174,000 on hotels she didn’t sleep in on a 12-hour trip to Canada. The hotel bills don’t include her staff or logistics team, who had $US18,000 total in hotel costs. A one-day trip to Canada by First Lady Melania Trump cost US taxpayers $US174,000, according to government […]

Melania Trump spent $95,000 on a hotel during a one-day visit to Cairo, and she didn’t even sleep there

First lady Melania Trump racked up a $US95,000 bill at a hotel in Cairo during her trip to Africa last month. Spending records show that a payment was made to the Semiramis Intercontinental hotel on September 30, about a week before Trump arrived on October 6. The description for the […]

A plane carrying first lady Melania Trump landed safely on Wednesday after a minor malfunction, according to press aboard the flight. Reporters said they could see and smell smoke in the cabin roughly 10 minutes after take-off. Trump had been en route to visit a hospital in Philadelphia, Pennsylvania. A […]

Melania Trump responded to criticism about wearing a ‘colonial’ hat in Africa: ‘I wish people would focus on what I do, not what I wear’

Melania Trump wore a white pith helmet on a visit to Africa that many pointed out is heavily symbolic of colonial rule. Trump told reporters, “I wish people would focus on what I do, not what I wear.” It’s not the first time her outfits have garnered criticism. Melania Trump’s […]