Italian stocks soar as ex-ECB boss Mario Draghi is tapped to lead the country. Bond yields fall sharply as investors welcome the idea of a banker-led government. Draghi led the European Central Bank through the worst of the eurozone crisis. Sign up here for our daily newsletter, 10 Things Before […] 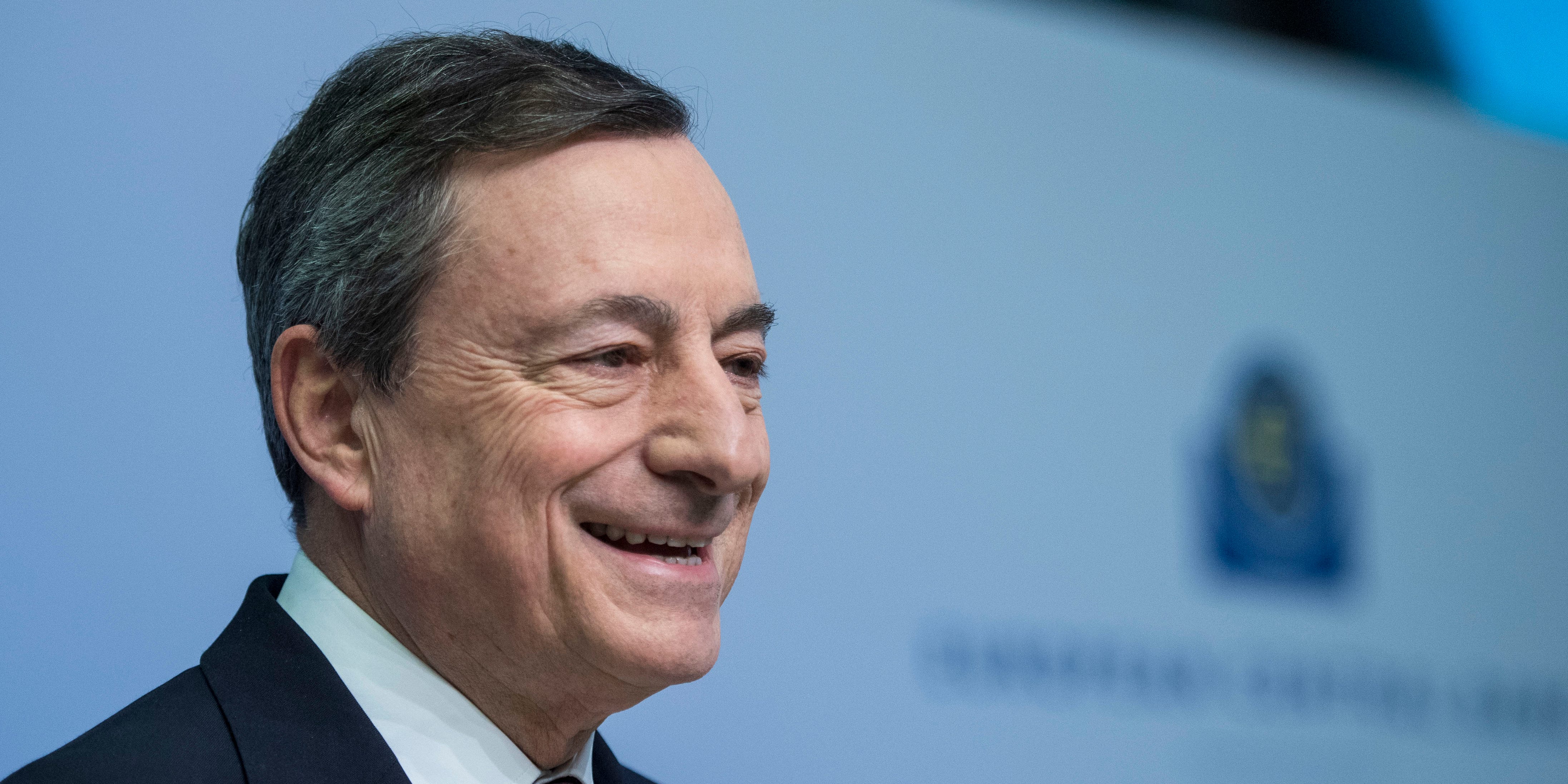 European economies will shrink and risk a prolonged decline unless governments plow cash into their economies to combat the fallout from the novel coronavirus, Mario Draghi said in a Financial Times column this week. “The challenge we face is how to act with sufficient strength and speed to prevent the […] Mario Draghi, in his last act as president of the European Central Bank, has maintained his stimulus package announced last month, keeping interest rates at a record low. Rates will remain at -0.5%. Christine Lagarde will now take over from Draghi as president, inheriting a struggling European economy. View Business […] European leaders have a fresh headache as data released on Thursday suggests the eurozone economy may only grow 0.1% this month. The IHS Markit flash PMI reading inched up from 50.1 in September to just 50.2, indicating the economy is close to stagnating. Germany continued to disappoint as employment fell […] The European Central Bank cut rates to a surprise record low, and launched a sweeping round of stimulus

The European Central Bank has just announced a sweeping round of stimulus for the eurozone, announcing both a rate cut and return to quantitative easing. Interest rates were cut by 0.1% to their lowest ever level of -0.5%, and the bank will start purchasing €20 billion worth of bonds each […]

Markets were flat on Wednesday as they waited to see if the Federal Reserve would signal its willingness to cut interest rates during its monthly policy update later in the day. Stocks jumped on Tuesday after Europe’s central bank indicated it would cut interest rates and buy up assets to […] Asian and European stocks and US futures fell on Thursday after central banks warned of a global economic slowdown and Brexit uncertainty looked set to linger for another six months. The European Central Bank (ECB) pledged to leave interest rates untouched for at least the rest of 2019, and promised […] US futures and European stocks rose on “Super Wednesday” as investors bet on good news from the Brexit summit, ECB meeting, US inflation data, and Fed’s March minutes. European leaders are set to grant a delay to Brexit of up to a year, giving British Prime Minister Theresa May more […] If the US is slowing down, Europe is headed for ‘an abrupt stop’

The ECB’s Mario Draghi signalled any rate rises might be delayed after saying he sees “persistent deterioration of external demand,” in the economy. “There is probably a little more ECB dovishness to be priced in yet,” says Neil Wilson at Markets.com The Euro Stoxx 50, France’s CAC and the Dax […]

European Central Bank leaves monetary policy entirely unchanged at the September meeting of its governing council. Base deposit rate stays at -0.4%, and will remain there until at least next summer, the ECB said. It continues to expect to end its quantitative easing programme by the end of 2018, having […]

European Central Bank leaves monetary policy entirely unchanged at the September meeting of its governing council. Base deposit rate stays at -0.4%, and will remain there until at least next summer, the ECB said. It continues to expect to end its quantitative easing programme by the end of 2018. The […]

Mark Carney, Mario Draghi and Haruhiko Kuroda are all missing from the list of attendees at this years central banker meeting at the remote mountain resort of Jackson Hole. The news comes alongside confirmation that none of the ECB’s executive board members will make the trip to the annual central […] The European Central Bank left monetary policy unchanged at its July meeting. This was widely expected, with most analysts forecasting little change in the last meeting before the central bank’s summer break. Quantitative easing in the eurozone will end at the end of 2018, the ECB reaffirmed. LONDON – The […]

The European Central Bank on Thursday announced plans to end quantitative easing by December. The central bank has undertaken an unprecedented program of stimulus since the eurozone debt crisis. Interest rates remained unchanged at the ECB’s June meeting. The euro slid on the announcement, falling close to 1% from its […]

Euro jumps above $US1.25 after the ECB leaves monetary policy on hold in January. Single currency climbs almost 1% against the dollar, before sliding a little. That fall came after President Mario Draghi made clear that he does not expect interest rates to increase during 2018. The euro jumped above […]

ECB tapers bond buying by €30 billion per month, but extends programme by 9 months Thursday’s policy meeting of the European Central Bank (ECB) is the key event on this week’s economic calendar. ECB President Mario Draghi is set to announce details of the bank’s plan to reduce its bond purchasing program. Any significant deviation from market expectations will have an impact across asset classes, […]

Thursday night is an important moment on this week’s economic calendar, with the European Central Bank (ECB) expected to announce a reduction in its long-running monthly bond purchase program. According to Marco Valli, chief economist at Italian bank UniCredit, the reduction will be higher than the median market forecast. However, […]

The euro jumped above $1.20 after Draghi said ECB will start to discuss tapering in the ‘autumn’

The euro climbed above the psychologically...