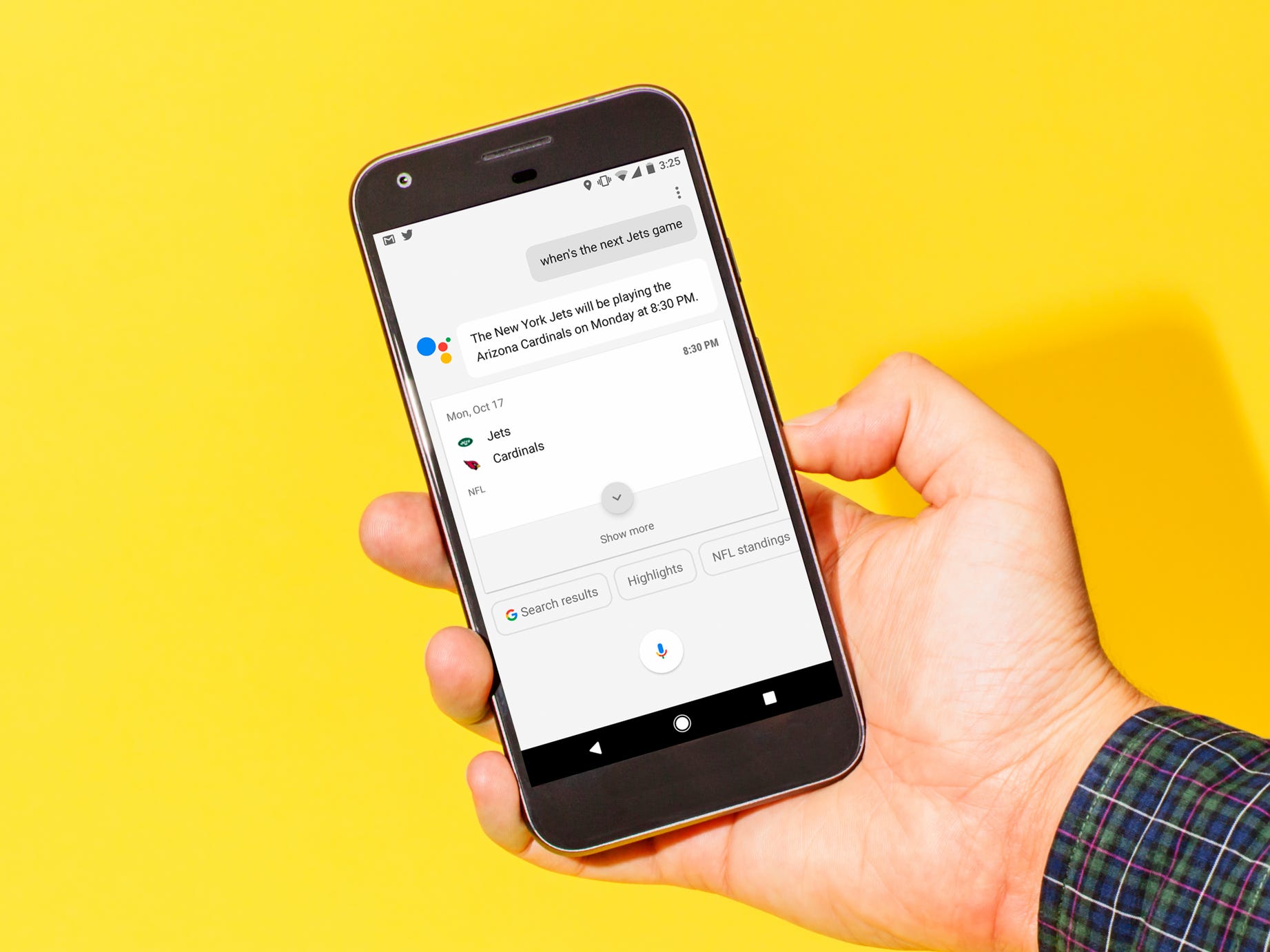 European lawmakers hit the tech giant with a whopping $10 billion worth of fines in the space of three years. 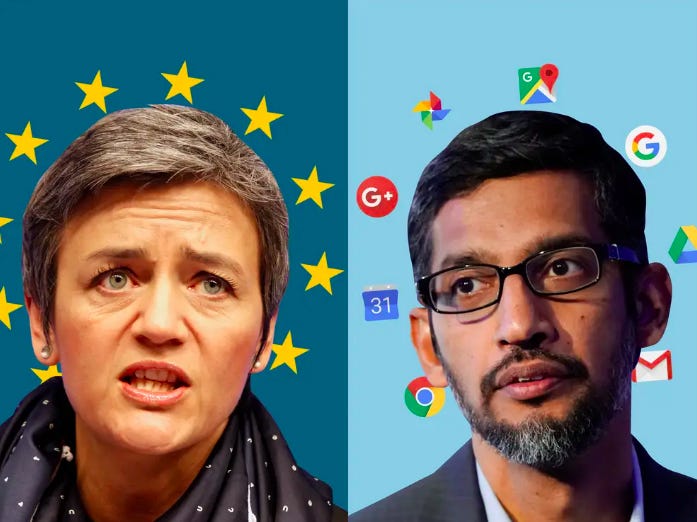 Google is under investigation again by the EU, this time over its online ads business

European officials have previously fined the tech giant close to $10 billion over claims of antitrust breaches. 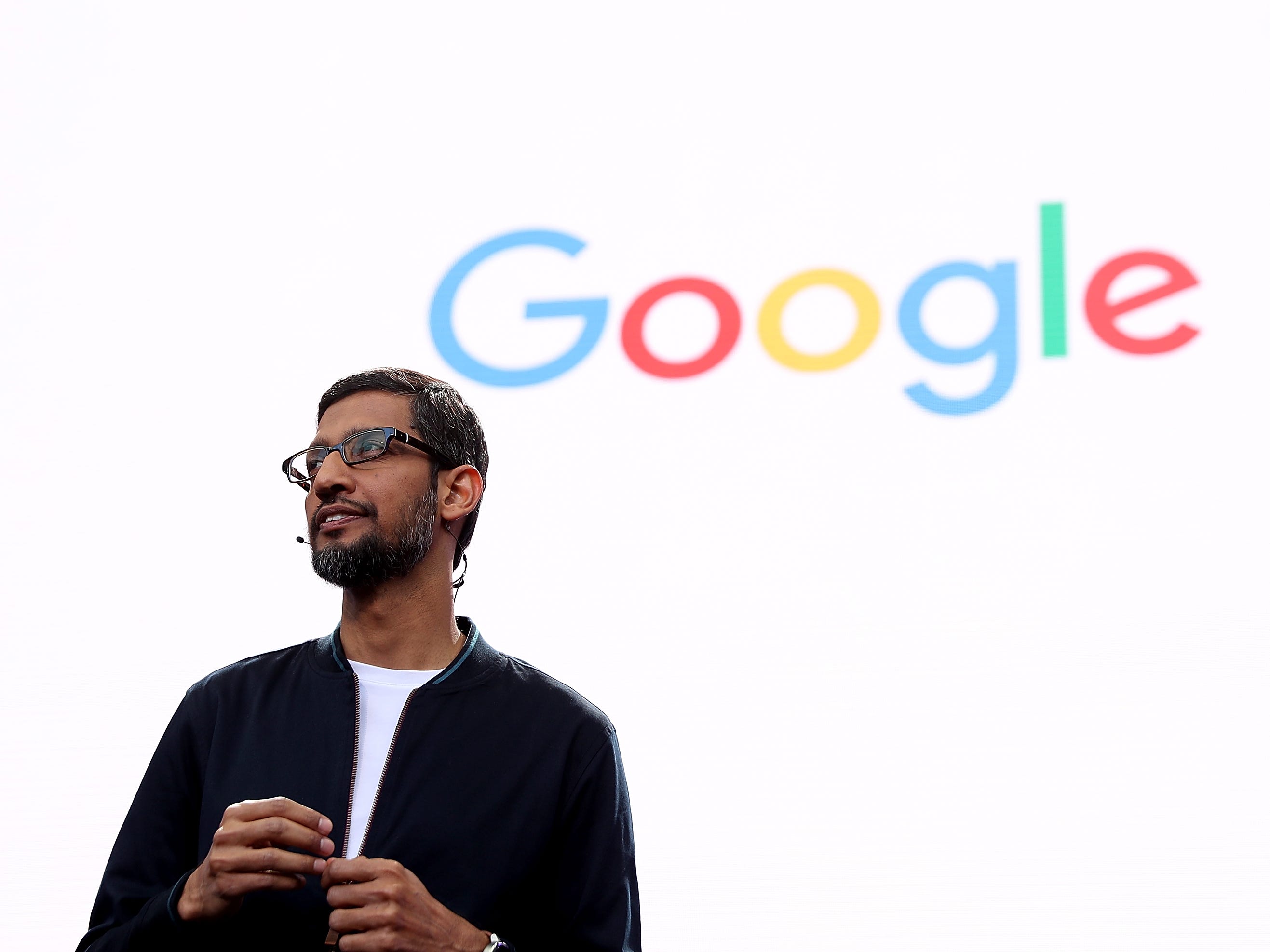 The European Commission on Tuesday filed an antitrust complaint against Amazon over the way it uses data from third-party sellers. If successful, the complaint could result in a fine equivalent to 10% of Amazon’s annual global revenue. This would mean a $US28.1 billion fine for Amazon. The commission accused Amazon […] 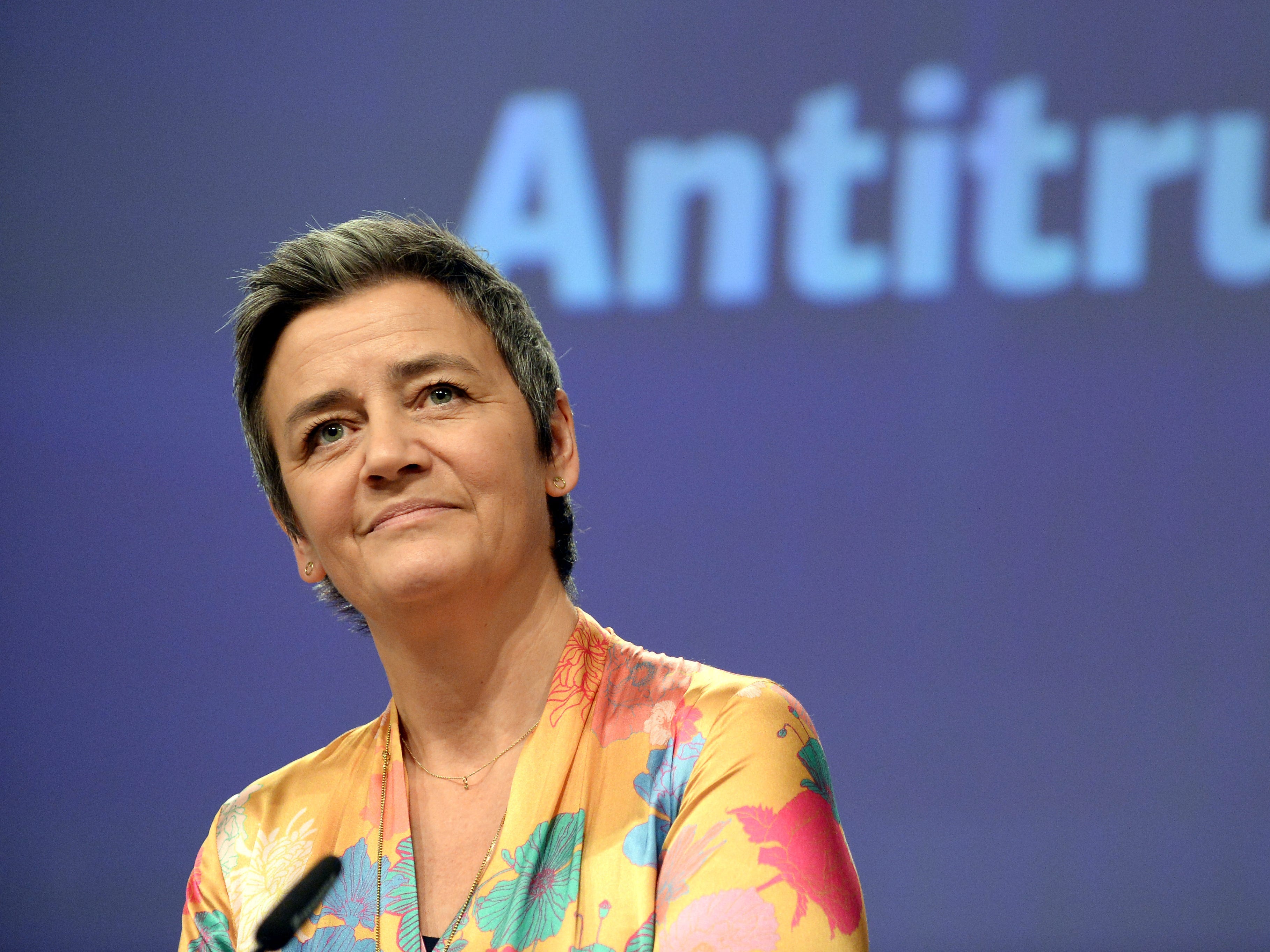 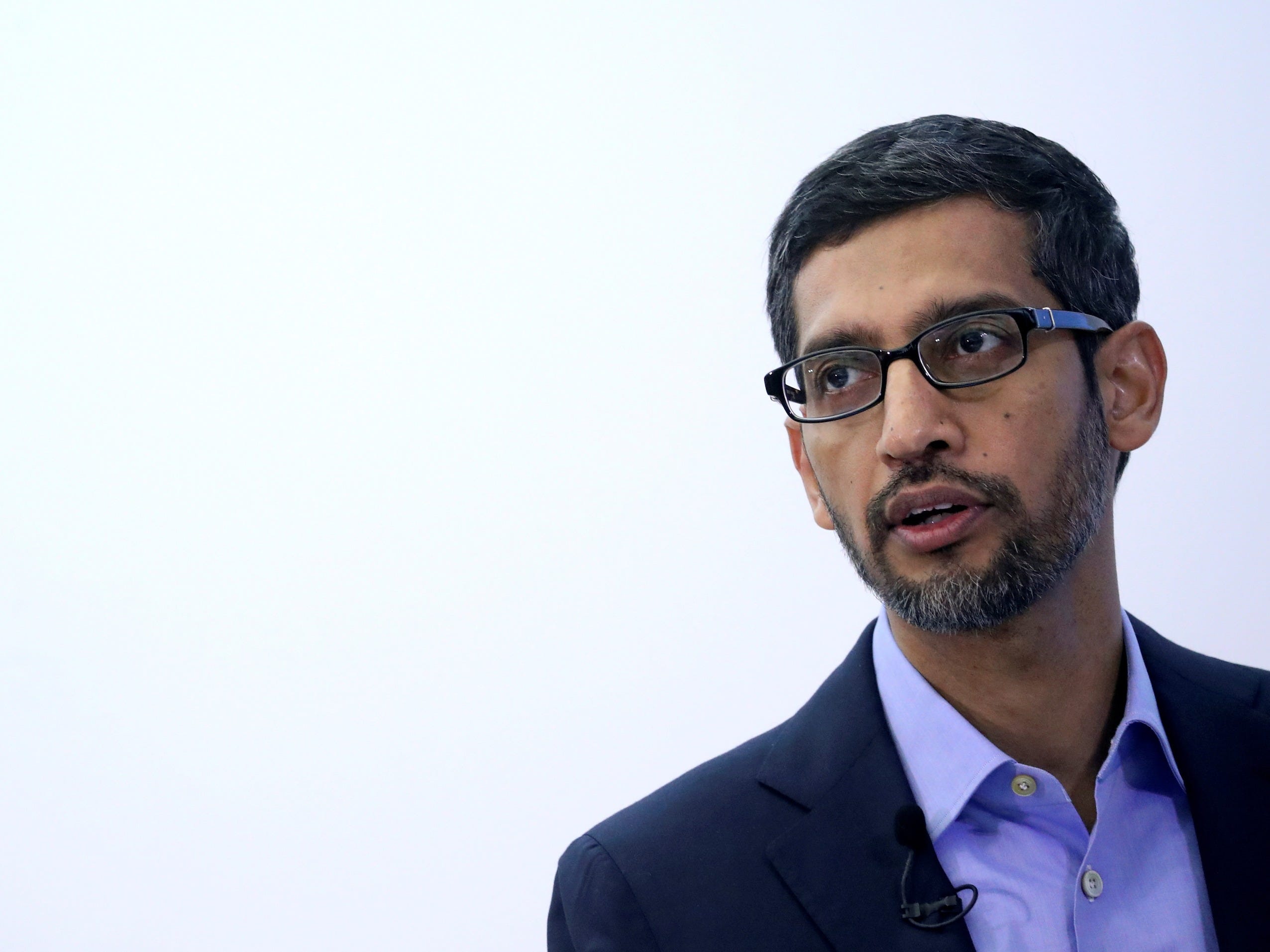 Europe revealed its ambitious plans to challenge the US’s and China’s dominance in tech and artificial intelligence. The European Commission wants to make it easier for local businesses, tech firms, and startups to trade in data through a “single market” that would allow them to compete with the US data […] Mark Zuckerberg struggles to curry favour with the EU, with sceptical lawmakers questioning Facebook’s dominance and the spread of coronavirus misinformation

Facebook CEO Mark Zuckerberg is meeting with EU lawmakers in Brussels this week, and they’re not making things easy for him. Zuckerberg is speaking to competition commissioner Margrethe Vestager, internal market commissioner Thierry Breton, and justice chief Vera Jourova. On Wednesday, Vestager and Breton are set to announce proposals to […] 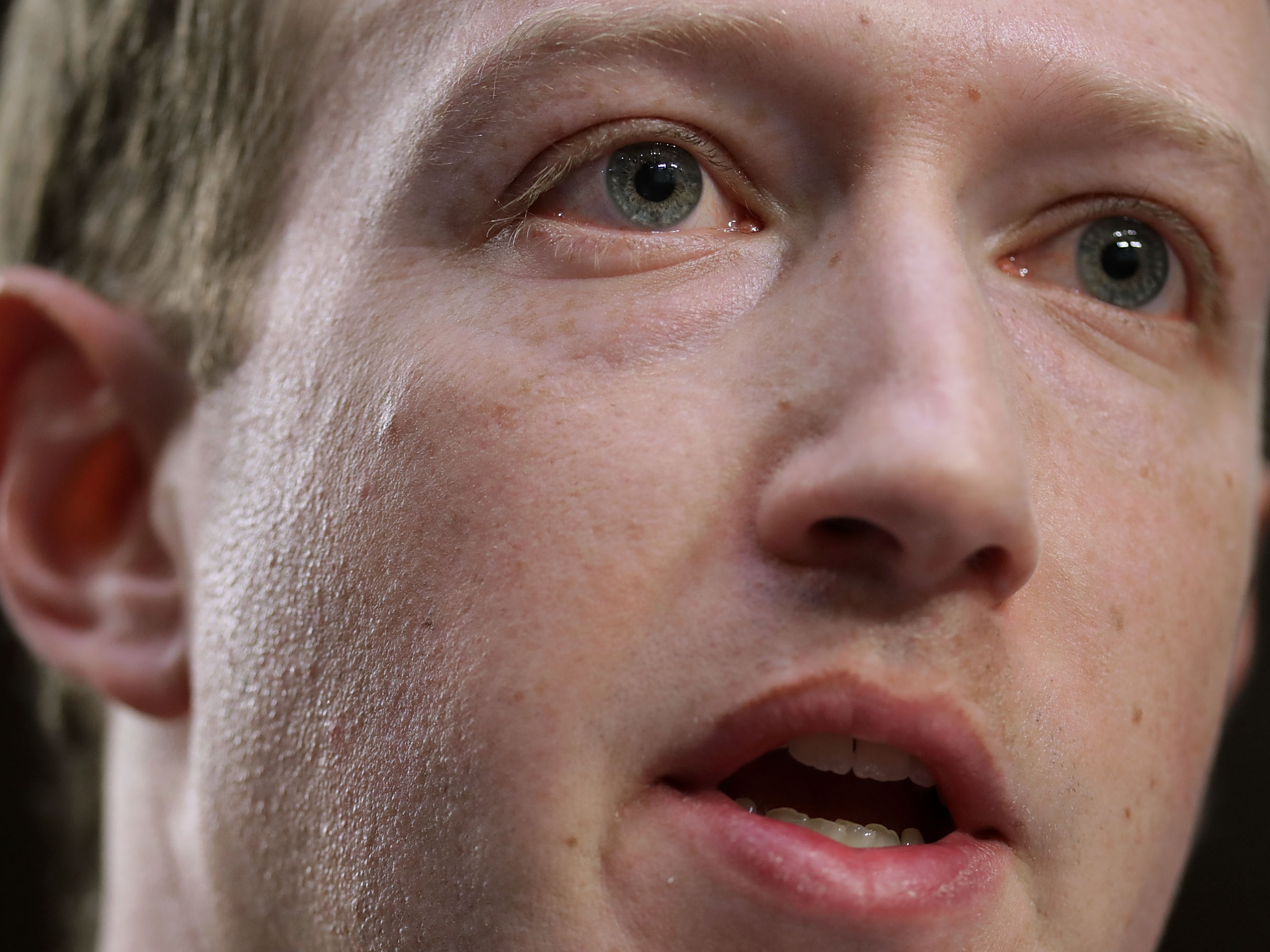 Europe’s de-facto tech regulator Margrethe Vestager threw her support behind a radical plan to tax the revenue of major tech firms. France and the UK proposed levies on the revenue technology giants generate locally, angering the Trump administration. Amazon, Facebook, and Google have all lobbied against the plans. Both countries […] Amnesty International has attacked the business models of tech giants Google and Facebook, describing them as “surveillance-based.” In a damning new report, Amnesty argues that because Facebook and Google scoop huge amounts of detail personal data on their users, their business models effectively depend on constant surveillance. The organisation argued […] Margrethe Vestager, the European Commissioner for Competition, offered a highly optimistic assessment of AI’s potential impact on society, saying she sees “no limit to how AI can support what we do as humans.” Vestager was speaking at the Web Summit tech conference in Lisbon, Portugal on Thursday, where she tackled […] EU Commissioner Margrethe Vestager, known for slapping huge fines on US tech companies, spoke at one of Europe’s largest tech conferences on Thursday. When she was asked about Facebook CEO Mark Zuckerberg‘s decision to allow politicians to run deceitful ads, her response was scathing. “The risk is we completely undermine […] The EU just launched a big antitrust probe into Amazon, and it could lead to a fine of up to $23 billion

The European Union’s competition commissioner, Margrethe Vestager, is launching a formal investigation into Amazon. The investigation is set to examine whether Amazon’s use of data from the independent retailers that sell on its marketplace is in breach of EU competition rules. Amazon’s role as both a platform for merchants and […] The European Union’s competition commissioner, Margrethe Vestager, is expected to launch a formal investigation into Amazon within days, Bloomberg reported Tuesday. Last year, Vestager confirmed that her team was exploring how Amazon used the data from third-party sellers. She made clear, however, that the work was at a preliminary stage. […] President Donald Trump has dropped a huge hint that he is ready to pursue antitrust proceedings against tech firms such as Apple, Amazon, Facebook, and Google. “There is something going on in terms of monopoly,” Trump told CNBC on Monday morning, adding that Attorney General William Barr was looking into […] Google fined $1.7 billion over a 3rd breach of EU antitrust rules in 3 years

Google has been fined $US1.7 billion by the European Union for its third breach of EU antitrust rules in three years. European Competition Commissioner Margrethe Vestager said the latest fine was for “illegal practices in search advertising brokering to cement its dominant market position.” Google’s EU fines since 2017 now […] The EU is gearing up to fine Google once again, sources told the Financial Times. EU competition commissioner Margrethe Vestager will reportedly announce the fine next week following an investigation into Google’s AdSense business. The Commission has slapped Google with over $US7 billion in fines over the past two years. […] European Commissioner for Competition Margrethe Vestager said, “In some of the areas where we have had very preliminary investigations, we find that Apple is not a dominant company.” In the past, Vestager has fined Apple €13 billion ($US15 billion) for non-payment of taxes and fined Google €7 billion ($US8 billion) […] To comply with an antitrust decision by the European Union, Google no longer requires Android phone makers to give Google apps preferential treatment. The down side for manufacturers using Android is that if they want Google Play or Gmail on their handsets, they will have to pay. Google is appealing […] The European Union’s competition commissioner, Margrethe Vestager, said on Wednesday that the EU had started a preliminary investigation into Amazon over potential antitrust violations. She said concerns had been raised over how Amazon was using data from third-party sellers and whether it was helping the company predict the “new big […]