Australian unicorn SafetyCulture is now worth $2.2 billion after another monster funding round, adding almost $1 billion in value in just 12 months

Workplace operations platform SafetyCulture has hit another milestone, minting a $2.2 billion valuation just 12 months after hitting its first billion. It comes on the back of a $99 million funding round, led by Insight Partners and participated in by existing investors like Blackbird. After acquiring microlearning app EdTech last […]

Boris Johnson has said he would back leaving the EU without a deal, leaving Britain with what he described as an “Australian-style” relationship with the EU under which the UK would “prosper mightily.” However, Australia’s last Prime Minister Malcolm Turnbull warned Johnson to: “be careful what you wish for.” He […] 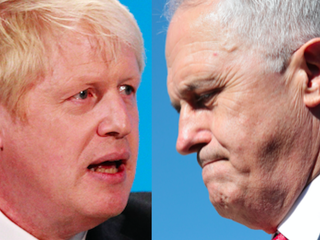 Trump has diminished the United States’ position on the world stage, according to former Australian Prime Minister Malcolm Turnbull

Former Australian Prime Minister Malcolm Turnbull says the US has “less influence” on the world stage than before Donald Trump became president. Turnbull told Business Insider that the US had reduced its influence over global affairs under Trump, and he criticised Trump’s “isolationist” decision to withdraw from the World Health […] 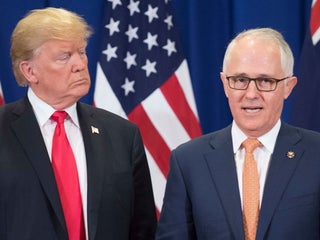 ‘Much can be learned’: Trump celebrates Australia’s ‘inhuman’ detention of migrants

US president Trump has tweeted his support for Australia’s hardline off-shore detention policy, as he cracks down on immigrants crossing into the US from Mexico. Australia’s treatment of migrants arriving by boat has long been controversial, with the UN just this month condemning it as ‘cruel, inhuman and degrading’, while […]

Malcolm Turnbull, the former Prime Minister of Australia, has urged Britain not to use Huawei’s telecommunications equipment when building out its 5G network. Huawei is a Chinese tech giant and some western nations have said they’re concerned that the company’s hardware could be used by the Chinese government for spying […]

An exasperated Malcolm Turnbull has said his decision to follow an Instagram account campaigning against Tony Abbott is just out of interest and doesn’t necessarily mean he supports the creators’ goals. The former prime minister tweeted this morning that it was “obvious” that “following someone on Instagram or Twitter does […]

Former prime minister Malcolm Turnbull will have a motion to have him expelled from the Liberal Party debated at the next federal electorate conference of the party. The Australian reports a meeting last night of party members in Roseville on Sydney’s leafy north shore passed a motion saying he should […]

The uneasy peace between Malcolm Turnbull and Scott Morrison has been shattered with the former prime minister effectively branding his successor a liar. Mr Turnbull has taken issue with Mr Morrison after the Prime Minister claimed Mr Turnbull’s two-day mission to Jakarta was to represent Australia at an oceans summit, […]

Result aside, the Wentworth vote is a disaster for the Liberal Party

As of Monday morning the most likely result of the Wentworth by-election is that independent Kerryn Phelps will win, but by a slim margin and not the landslide it appeared to be on Saturday night. But even if Liberal candidate Dave Sharma was to manage a spectacular last-minute turnaround with […]

Former Australian Prime Minister Malcolm Turnbull has taken an axe to the list of accounts he follows on Twitter. Only 26 have survived the cut, and of those only 17 are people — mostly heads of state, political journalists and four family members. He has 987,000 accounts following him. Here’s […]

Malcolm Turnbull has lashed out against the ‘miserable, miserable ghosts’ of past prime ministers

Former Australian prime minister Malcolm Turnbull said the Liberal leadership spill was “crazy” and Kevin Rudd and Tony Abbott were “miserable, miserable ghosts”. “Move on,” he said at a Reuters event in New York, where he and his wife Lucy have stayed since Turnbull lost the leadership to Scott Morrison. […]

Scott Morrison has rejected advice from his predecessor Malcolm Turnbull that the government refer Peter Dutton to the High Court, saying voters have had enough of “the lawyers’ picnics” that had resulted in the removal 15 MPs and Senators under section 44 of the Constitution. Legal opinion is divided over […]

What Australian politics teaches us about the psychology of revenge

It’s hard to read the recent felling of Prime Minister Malcolm Turnbull as anything other than an act of revenge by Tony Abbott and his closest supporters. This is indeed the judgement of former foreign minister and opposition leader Alexander Downer and former Liberal Party treasurer Michael Yabsley, as revealed […]

Ousted Prime Minister Malcolm Turnbull has announced he will leave federal Parliament on Friday. Turnbull previously said last week that if there was a second spill after Peter Dutton’s attempt to overthrow him on Tuesday, that he would not recontest and would leave parliament. On Friday, Scott Morrison won a […]

Early indications after last week’s chaos for the Liberal Party are that voters are ready to punish the Coalition. The Liberal Party has been struggling financially — Malcolm Turnbull was their biggest donor — and a drop in the primary vote will cost it money after the next election. This […]

Malcolm Turnbull had many weaknesses in politics, but his final act was a masterclass in destroying your political enemies

Malcolm Bligh Turnbull was never going to go quietly. One of the common criticisms of Turnbull was that he had no political skills, but the last act of his political career suggests otherwise. By deploying a range of stalling tactics and the well-timed seeking of some legal advice, Turnbull — […]

Three years ago, on September 15, 2015, Malcolm Turnbull defeated Tony Abbott to become Prime Minister. Today, August 24, 2018, Turnbull stepped aside and did not recontest after the party voted for a spill in the leadership. Scott Morrison became the country’s 30th federal leader, defeating Peter Dutton. In his […]

Friday, it’s Friday, which seat will I choose? 1. Australia could have its second female Prime Minister by lunch. But first, a few things have to happen. The PM should have legal advice from the solicitor-general on whether there are any concerns over Peter Dutton’s eligibility to sit in Parliament […] Scott Morrison has been elected leader of the Liberal Party, defeating Peter Dutton 45-40 in a partyroom vote in Canberra. He will be Australia’s 30th prime minister. Our blow-by-blow live coverage is below. 4:20pm: SCOTT MORRISON SPEAKS He starts by saying “we’re on your side”, and describes himself and his […]

Prime Minister Malcolm Turnbull addressed the media at 1pm on Thursday about the leadership crisis engulfing his government. Here is the transcript: Australians will be rightly appalled by what they’re witnessing in their nation’s Parliament today and in the course of this week. So I don’t want to enter into […]