A ‘super blood moon’ will appear large and red in the sky on Wednesday. Here’s how to spot the rare eclipse.

The best viewing spots in the US are in Alaska and Hawaii, but most western states should have a decent view of the eclipse. 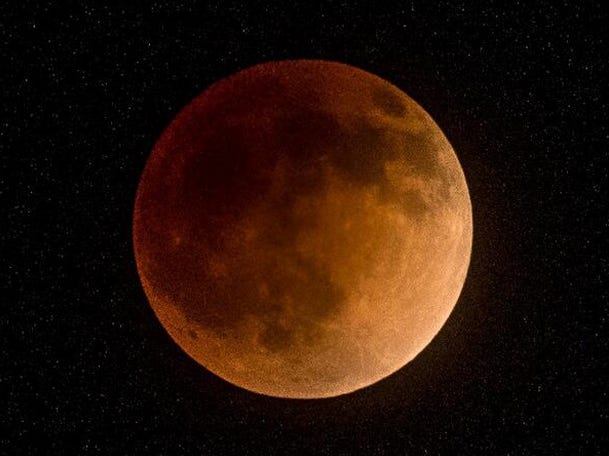 A total lunar eclipse will occur on Sunday, January 20. This “super blood wolf moon” gets its name because the eclipse will occur when the moon is full (called a wolf moon in January) and closer to Earth than normal (a super-moon). The Earth’s shadow will make it appear reddish. […] The longest total lunar eclipse of the century happened last week, on July 27. Although the event looked stunning from many parts of Earth, a 2014 video from NASA’s Messenger satellite reveals what the event would have looked like from Mercury. On the night of July 27 and the early […] An astronaut photographed the ‘blood moon’ from the International Space Station, and his pictures are haunting

An astronaut in space captured haunting photographs of Friday’s total lunar eclipse, also called a blood moon because of its eerie orange-red colour. German astronaut Alexander Gerst, a geophysicist and spaceflight veteran, launched toward the International Space Station(ISS) on June 6. In the short time the European Space Agency astronaut […] Why the moon turns red during a total lunar eclipse

If the moon is in Earth’s shadow during a lunar eclipse, how can we still see it? And why does it turn red? The answer has to do with our own terrestrial sunrises and sunsets. Following is a transcript of the video. Narrator: A blood moon lunar eclipse wasn’t always […] Here’s when you can see the longest lunar eclipse in the 21st century, based on where you live

A blood moon – the longest total lunar eclipse of the 21st century – will occur on the night of July 27 and the morning of July 28. The lunar eclipse is set to last for 1 hour and 43 minutes. The event will only be visible in the Eastern […] A total lunar eclipse, or blood moon, will happen overnight on July 27. The eclipse is slated to last nearly 1 hour 43 minutes – the longest in about a century. Total lunar eclipses and total solar eclipses are essentially the reverse of one another; the difference is the relative […] The longest total lunar eclipse or blood moon in a century will happen in the early hours of July 28. From the moon, Earth will look like it’s surrounded by a ring of fire – with its sunset and sunrise connected in a loop. NASA has an animation showing what […] Australia is getting a Blood Moon this weekend

Australia will be treated to a Blood Moon and a total lunar eclipse, as the Earth passes between the Sun and Moon, this weekend. The Moon will appear to darken and gradually turn red as it moves into Earth’s shadow in the early hours of Saturday. “The red colour comes […]

A total lunar eclipse, or blood moon, will happen in the earlier hours of the morning on July 28. The eclipse will be coloured orange-red due to sunlight passing through Earth‘s atmosphere and bouncing off the moon. The eclipse is slated to last nearly 1 hour 47 minutes – the […] A blood moon – and the longest lunar eclipse of the 21st century – will occur on the morning of July 28. The total eclipse is set to last for 1 hour and 43 minutes. The eclipse will only be visible in the Eastern Hemisphere. July is shaping up to […]

On Wednesday, for the first time in over 150 years, people around the world caught a glimpse of a “super blue blood moon.” The term refers to three lunar events that happened at once: a full moon at the point in its orbit closest to Earth, the second full moon […]

Tonight (January 31, 2017) Australians will be able to see a lunar eclipse that coincides with a supermoon and blue moon. Your phone isn’t designed to take images of the moon, but you can take some steps to capture something other than a fuzzy yellow blur. The biggest key is […]

How and when to watch Wednesday’s ‘super blue blood moon’

The full moon on Wednesday will be the second in a month, making it a blue moon. It will be at the part of the moon’s orbit that defines a supermoon. And there will be a total lunar eclipse. The total lunar eclipse is the most exciting for astronomers – […] On January 31, we’ll get the third supermoon in a row, which will also be the second full moon of January and coincide with a total lunar eclipse. The last time all that happened together was almost 152 years ago. These celestial phenomena aren’t actually that dramatic on their own, […] Here’s why lunar eclipses are so rare

VIDEO: The first lunar eclipse of 2016 is this Tuesday.